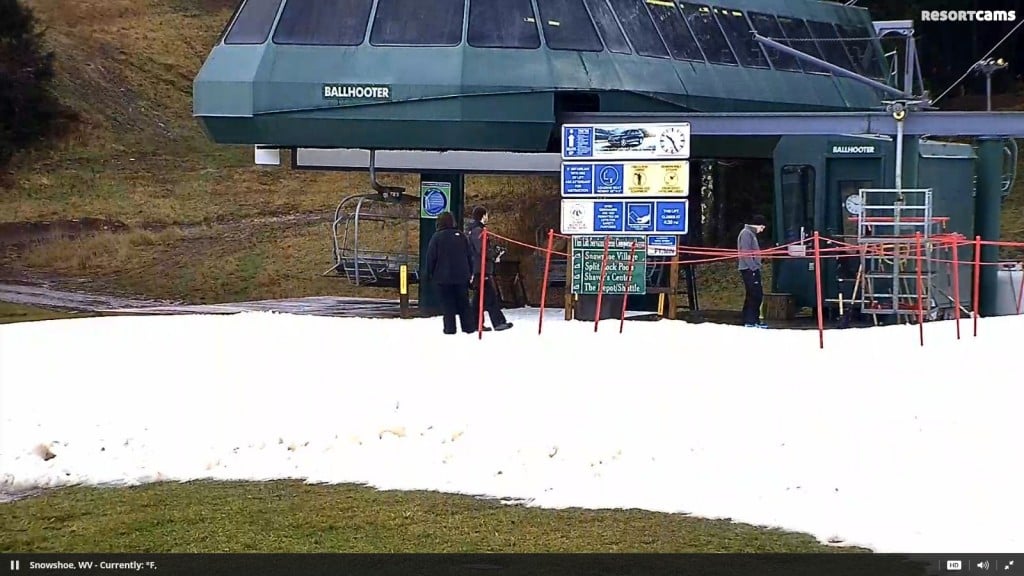 Before I get into a ton of detail (as I always do), let me go ahead and inform you of the ski areas that ARE OPERATING TODAY, Christmas Eve.

52° – Snowshoe Mountain – Open with 13 slopes and trails for day and night sessions and the snow tubing park. Snowshoe posted, “Early season conditions, marked and unmarked hazzard exits. Please use caution. Play it safe, Enjoy the Mountain! Terrain park features will be set on Powder Monkey for use today. Progression Park opened as a trail without features.”

54° – Canaan Valley Resort – day sessions today with 6 slopes and trails open with a base that THEY are reporting – not in inches but as “Spring Conditions”. They are also advising people to call or check ahead about being able to remain open on Christmas Day.

56° – Winterplace Resort – day sessions on 3 slopes and trails. They dropped from six open on Wednesday.

54° – Cataloochee Ski Area is the ONLY ski resort in the state of North Carolina that is OPEN for today. They have the same 5 slopes open for day sessions and they are snow tubing as well. They become the best bet for the best conditions in the region (not just North Carolina) based on base depth and side to side coverage.

That’s IT for today people. Four ski resorts in West Virginia and One in North Carolina.

There’s No Spinning This…

I have been speaking with resort execs and industry insiders over the last week and all of those people are positive thinkers. You HAVE to be when you’re in the snow business. These guys and gals are non-stop, glass-half-full kind of people. I consider myself that kind of person as well and my good friend, Joe Stevens is probably the most positive of all of us. He’s the guy who came up with the term “under-developed snow” for the word “rain”.

I’ve had the opportunity to speak with Joe more than a few times during this stretch of bad weather and as I was speaking with him this morning he shared, “Mike, I’m a ‘spin master’ but man there is no spinning this situation. It has now reached a point that it simply is what it is and it isn’t good. This is going to hurt and hurt bad.”

This is going to hurt because this rain and “white-hot-Christmas” weather is so horribly timed to happen right AFTER all of the ski areas were able to make a ton of snow over last weekend HOPING that it could allow them to get open and stay open through the all-important Christmas-to-New-Year period. That three week stretch (the week before Christmas, the week of Christmas and the week after Christmas) generates about 35% of ski resort income and revenue within a typical season.

According to Stevens, “The resorts are hurting because of the horrible timing of this weather and this will not only hurt the ski areas but every business within those ski communities that rely on tourism.”

I have personally spoken with a few lodging clients who have informed me that they were not only having to field a ton of cancellations, they were having to refund hundreds of thousands of dollars. Joe Stevens shared one situation that he was aware of where a 3rd party lodging company had recently reported that they had refunded nearly $100K in reservations and that they were having issues with employees leaving because they couldn’t make money.

The bottom line is that this is going to hurt and the fallout from this could be felt long-term even if the rest of this season turns out to be awesome. We’ll just have to see how this all plays out.

Earlier on Wednesday I was texting back and forth with Appalachian Ski Mountain’s Brad Moretz as they had dodged the heavy rain and for the most part had only seen some misty rain and fog. I was also texting with a few other resort ops and I kept reading texts that shared words like:

My word was, “unprecedented”.

I received more than a few emails from readers sharing things like, “Can you imagine how much snow this would have been if cold air was in place?” 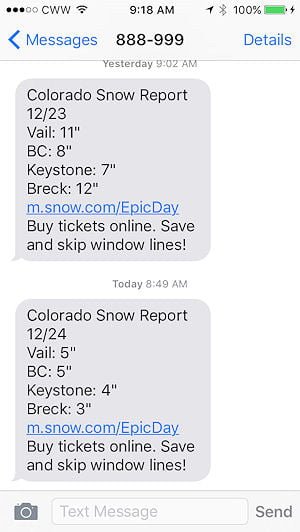 …and then I got YET ANOTHER freaking text alert from Colorado this morning showing yet another round of snow. It is truly bizarre, unparalleled, unprecedented…whatever word you want to come up with. It’s also nuts.

Late on Wednesday I was fielding back-to-back emails, texts and a couple of phone calls from resort ops and industry insiders and the general sentiment was astonishment at the “weather blanket” that has seemingly been thrown across the entire east in terms of simply preventing resorts from being able to make enough snow throughout most all of November and December.

Everyone was holding their collective breath as the predicted heavy rains had kind of danced all around our coverage area without dumping on us at that point.

However around dinner time last night I was checking out several of the live cams and it was raining very hard at Snowshoe (viewed from the Shavers Center and Boathouse cams). However, the rains DID make there way into the entire area as moisture has just been sucked up and over the entire region from south to north. 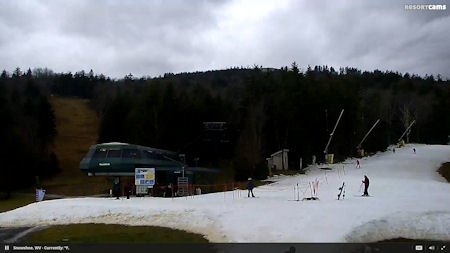 There ARE guests having a great time on the snow!

As of this report, the rain is over. It looks pretty decent at Cataloochee and Snowshoe as guests are playing on the snow that is available today.

More rain is moving into the area and as of this morning I had been hearing heavy thunder and witnessing some intense lightning since about 5am this morning. The rains have not been ultra heavy where I’m at, but we have heard of rainfall amounts in the 1-3″ range with rains pouring at about 1″ per hour in some locations.

The CoCoRaHs reporter for Haywood County, with a station at the base of Cataloochee is reporting 1.81″ of rain in the last 24 hours.

The NWS reporting station at Snowshoe Mountain JUST came in at 9:29am and it reflects 1.25″ of rain fell in the last 24 hours.

The crazy thing is that most CoCoRaHs reporting stations across Maryland, West Virginia, Virginia, Tennessee and North Carolina are all reporting from .52 to .75″ for most areas of each state – although there are some pockets of 4″ or more of rain. However, seemingly the same mountaintops that tend to grab moisture and hold it for snow storms…have done so for rain this time around.

…and Those Rains Have Forced Closures for Ski Areas…

When we posted a late Wednesday report about Sugar, Beech and Wintergreen suspending operations, we had not received many reports of the rainfall totals. Those rains and the thunderstorms that are in the area this morning have now forced additional ski areas to suspend operations.

As of 8am Christmas Eve, these are the ski areas that will NOT BE OPEN until further notice:

Appalachian Ski Mountain – I received a text this morning from Brad Moretz and he informed me that they are suspending operations TODAY due to thunderstorms in the area and they are normally closed for Christmas anyway. So they will HOPE to open Saturday but will assess the conditions and announce that decision ASAP.

We’ll Make Lemonade Out of Lemons. How About You?

At this point there are only five of 16 ski resorts open in the region. It is very probable that another one or two of those may not be open after another day or two of rain. Heck at this point there COULD BE a total wash-out and by Saturday there could be NO ski area open in the region as the forecast IS calling for another inch or more of rainfall through Saturday.

So I’m not going to lie; it doesn’t get much worse than this. Right NOW we have five ski areas open and I’m thinking that number will change between now and Saturday. We could see a resort or two drop off the OPEN list and from what we’re hearing we COULD see Wisp, Wolf Ridge and Appalachian open on Saturday.  So that IS what it IS.

I realize that this won’t effect enough of you guys to make a difference, but I am going on record to say that I will be at Snowshoe Mountain Resort on Saturday – even if there are NO slopes open. I’m thinking that there WILL be a few trails open, but regardless, I will be there. There is so much fun to be had and so much to do, that my crew has informed me “that it simply isn’t ONLY about the snow”.

If there ARE some trails open – there is probably going to be an EPIC time of making laps with nearly no lift lines. If there are not any open trails…we’ll find our fun off the slopes.

I HAVE received numerous emails from hundreds of our readers that seem to be sharing the same thought. Here is another (I’ve shared many lately.):

Are you guys skiing this week? We are going for it! We have 3 boys in lime green pants snowboarding & in blue & pink jackets skiing. We’d love to catch up with you!

So we’ll be there with a few friends who have emailed us. If you have a Snowshoe trip planned and you’re keeping your reservations regardless…email me. We’ll try to meet up and get some photos and videos and do a LIVE broadcast from the slopes – on them or just off!

Joe Stevens and I plan on doing a “Snow Report” slopeside on Friday and Saturday of next week and if there are resorts and slopes open…or NOT, we’ll talk about it.

Keep the faith my friends…