“The Cat Is Out of the Bag”

Story and Photos by Brian Dix

Happy Holidays to all of you skiers and riders of the southeast. This time of year is always special, but given the current setting I’d like to say that we should just put a big ribbon on this chaotic calendar year and remember to celebrate the joyful things we still have. Of course let’s do this in a safe and mindful manner.

In spite of the changes to what was “normal”, the cold temps are here again, the snow guns have fired up, and the lifts are spinning at a few resorts already. You can consider those to be basic ingredients needed to fulfill your skiing appetite, and I can report that the current slope conditions will provide the satiety you seek.

No doubt about it, this recent weekend was a prime opportunity to knock the dust off the gear and head to the mountains. I was fortunate enough to get a few laps in for the first time in what felt like years, actually closer to 9-1/2 months, at Cataloochee. The excitement built with each passing mile, and it really spiked once I saw this highest peaks near Asheville covered in white at the top. Upon arrival the stoke meter was almost off the charts, and the sensation of satisfaction hit 100 the very moment I finally clicked into the bindings. Go time! 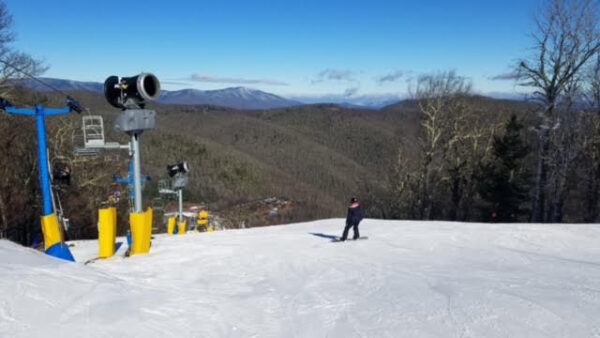 Cataloochee was serving top to bottom skiing and riding from the Omigosh two seater lift with the run combo of Upper Omigosh, Rock Island Run, Lower Omigosh, and Rabbit Hill. They also had the beginner area opened with the Easy Way three seater lift and accompanying Easy Way and Rabbit Hill runs. The Wolf Creek Hollow area was open too for the first timers.

The snow conditions were terrific for the beginning of the season thanks to their snowmaking crew. They made sure to provide enough coverage whereas to eliminate all brownish bare spots. #ThankASnowMaker. They also covered the runs from end to end which helped provide necessary socially distanced elbow room.

Cataloochee did bout with some underdeveloped snow the previous day which added extra saturation to the surface, and that led to some icy patches on Upper Omigosh. This was only a challenge for the early birds though, because the warmth of the sun eliminated most of that issue by lunchtime. I’m one to believe that it is worth the elbow grease or money to have your edges sharpened so you can get a grip. If you wax as well, a warm or mid level temp was sufficient. 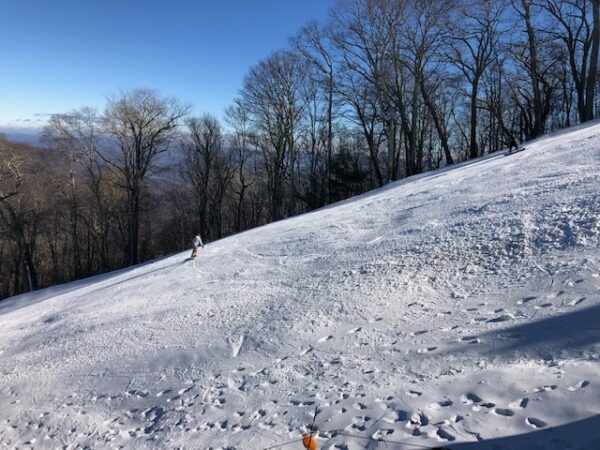 Cataloochee was only offering day time sessions this weekend. The rumor I heard was a night skiing will return around the 12th or so. Between now and then the weather pattern favors more snowmaking opportunities so it should be awesome when it comes back.

While the slope traffic was relatively spaced out – the bottom of the lift lines had a wait to ride back up. This is due to the amount of visitors and the limited uphill capacity it can carry. I would guess anywhere from 5 to 10 minutes on average with an almost 15 minute wait once around mid-day. If the Rock Island three seater lift had been open, it would of cut down the wait, but it is early season and most ski areas have limited staff at the beginning.

I overheard that covid-19 has caused their typical portion of International staff members to not be here which has created a void. I guess if you have a desire to earn some money that comes with an amazing perk of FREE skiing and riding I would suggest contacting your local ski resort and see if there is a void to be filled. 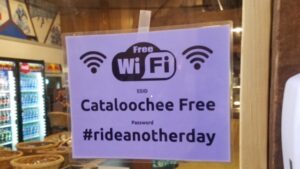 Speaking of covid-19, the safety measures and protocols were in place and only a few changes were noticeable. The biggest change was not having the indoor dining area and bar open, but no worries as the restrooms, gift shop, and kitchen remained open. They were taking meal orders via the Chow Now app and the base lodge was provided free wifi (SSID Cataloochee Free and Password #rideanotherday). Apparently if you did not have a smartphone they had a kiosk downstairs with tablets that would take your orders too.

Beyond that they had someone going around with a backpack full of sanitizing chemicals, and they were spraying it to high contact surface areas such as doorknobs. Others had sanitized wipes and were doing the same. All employees wore masks everywhere, and I wish the same could be said about people waiting in the lift line. 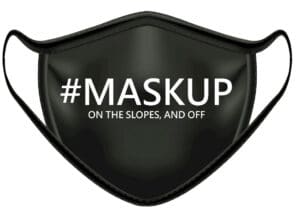 This is not an attempt to throw shade on a group of people, but I want to place a plea to the most present demographic that I observed, the younger crowd with age ranges of 18 to 30… Please wear a mask when people are gathered around such as lift lines. I get that being outdoors is safer, but we were all in close proximity less than six feet nonetheless. I also get that your immune systems most likely can fight off infectious diseases easier than older folks, but we do not know yet to what extent the lingering effects may be years down the road. Do not be someone who has regrets later on in life. Mask up for yourselves, for others, and for the life of this ski and ride season.