The Best February 29th Conditions in at Least Four Years 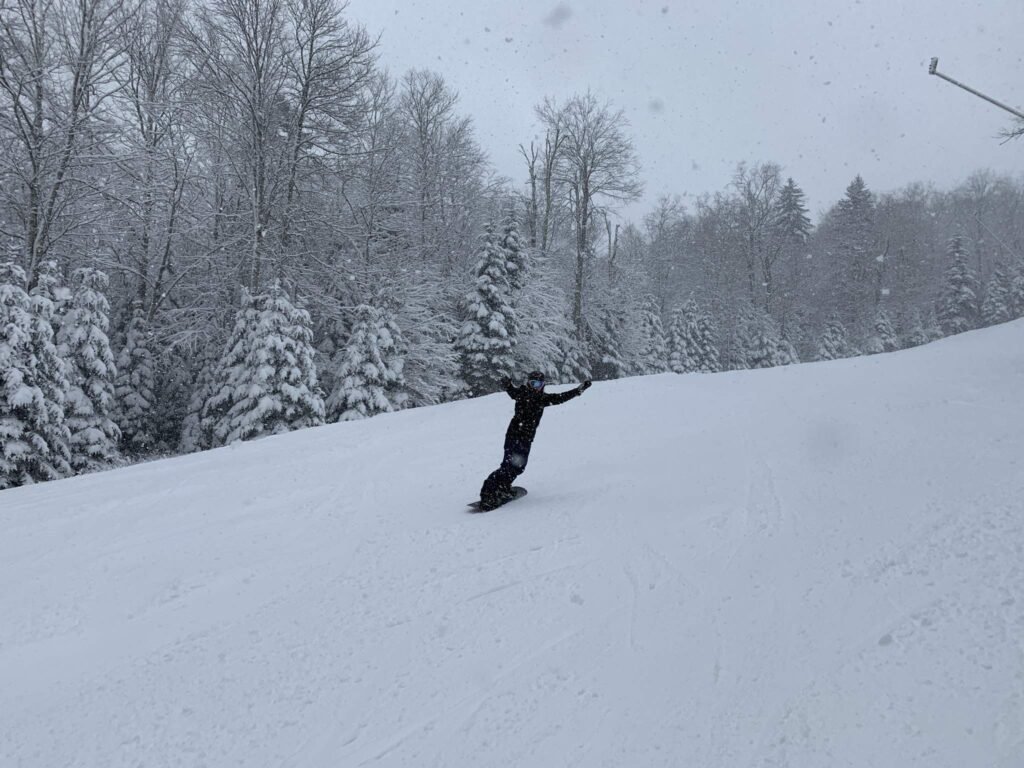 I had to chuckle at myself this morning as I looked at the calendar and realized today is February 29th.  Man, do I feel like an idiot now after titling yesterday’s morning report “Happy Friyay and Last Day of Meteorological Winter“.  Face palm.  Somehow I completely forgot that it’s a leap year and lost track of days.  That’ll happen sometimes though when you’re on a ski/snowboard trip.  You just completely lose track of things.

So today is really the last day of meteorological winter.  It’s going out with a bang as we have more natural snowfall to talk about across the region.  Several more inches fell at the North Carolina ski areas.  Beech and Sugar Mountain are reporting three inches this morning.  That takes those two to half a foot in the past three days.  Appalachian Ski Mountain frustratingly doesn’t report snowfall numbers on their site, but the nearby Blowing Rock webcam showed something like a half inch or so.  Cataloochee doesn’t report snowfall numbers for the most part either, but a nearby CoCoRaHS station was showing 2.1”.  I’m still waiting on Wolf Ridge (UPDATE: 3″) and Sapphire to update their reports this morning.

There will be some additional snow at the NC ski areas this morning as the webcams and radar showed some bands of fairly heavy snow moving through.  It’ll be a nice little extra layer of fluff on top of the trails for those folks who hit rope drop!

This is easily the best storm cycle of the season for those two resorts and actually accounts for 20-25% of their snowfall this season.  As I said yesterday, that’s a pretty cool stat but also indicative of the low snow year we’ve had.

Elsewhere in West Virginia, Winterplace is reporting 2″ of snow this morning.  Not quite as much as the other WV ski areas but it’s still snowing there as of this writing and it looks like a winter wonderland out there!

Up into Maryland, Wisp Resort saw another two inches in the past 24 hours.  I think so anyways.  They’re showing 5″ in the past 24 hours on their site, but their seasonal snowfall only jumped two inches since yesterday.  That’s a little confusing but whatever their snowfall number is, the mountain looks to be in great shape on the webcams.

Ober Gatlinburg in Tennessee is reporting a “heavy dusting” this AM while the Virginia resorts haven’t seen any natural snow, but man they are cranking out the manmade stuff.  Bryce, Massanutten, and Wintergreen were all blasting away this morning and should all be offering quality conditions for the weekend.  Here’s a video from Wintergreen for proof of that statement.

That’s a lot of information to digest but the too long didn’t read version is that this is going to be a great weekend for skiing and snowboarding in the Southeast.  You really can’t go wrong wherever you go.  I’m about to get ready and make some turns myself.  My third powder day in a row!

We’ll probably be doing some updates on here and on social media throughout the day, so check back for that.  If you’re here at Snowshoe, make sure to meet us at The Boathouse for lunch and lots of free stuff.  Mike went all out this year and has a ton swag to give away.

Previous Post
Happy Friyay and Last Day of Meteorological Winter
Next Post
What a Weekend it Has Been; What A Sunday it Will Be