News Channel 36, Charlotte, Meteorologist Brad Panovich has released his Winter Forecast Video for SkiSoutheast.com for the ski resorts from Wisp Resort in Maryland through Snowshoe Mountain, Canaan Valley in West Virginia, Wintergreen and Massanutten Resort in Virginia, Ober Gatlinburg in Tennessee and of course all of the North Carolina ski areas.

The quick summary is that Brad’s Winter Forecast for the 2010-2011 ski and snowboarding season is definately better than what many of the region’s weather peeps are forecasting. Remember that Brad was RIGHT ON with his forecast for last season. Some local and regional weather gurus are NOW touting their own forecasting success for last year, but unlike a lot of these people we archived every written and video forecast that Brad posted last season and he nailed it. Just to keep some of the local weather guys honest, we actually saved their forecasts as well and despite their rewriting of history some of them were not so accurate as perhaps they’re hinting that they were. We’ll leave it at that and move on. Suffice to say that unlike many sources, we archive ALL story posts and videos and we’re pleased to have Brad Panovich doing his thing for us again this season!

SO WHAT SHOULD WE EXPECT? 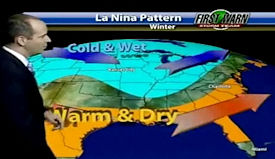 The bad news according to Panovich is that there’s no El Niño that will dump deep snow after snow on our region this season. However, unlike many meteorologists, Brad is saying that he’s expecting a setup for this winter that very likely will send the storm track far enough south that we should see several clipper systems that will deliver very winter-like snows across the area.

Brad’s also gotten VERY specific about which states will see colder than normal temps, despite the fact that most weather sources are calling for temps close to one degree warmer than normal for the entire region.

Brad is forecasting the following:

1/2 to 1° colder than normal temps for Maryland and the West Virginia Ski areas and at the highest elevations of the Virginia and North Carolina ski areas. Some of the resorts like Wolf Ridge, Cataloochee and Ober may see temps a little milder than normal to normal.

As per snowfall or precip, he sees things this way: 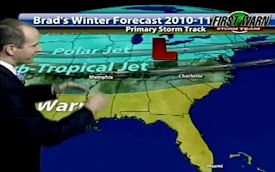 <Brad says he thinks the storm tracks will be a bit flatter than a normal El Nino winter with clipper systems sending normal to more than normal snow for the northern tier of the southeast…and about normal to slightly below normal snowfall further into North Carolina.

The WV and Maryland ski areas will receive as much as 20% MORE SNOW than normal! He’s thinking perhaps 10% more than normal for the Virginia ski areas as well as resorts into North Carolina. Ober Gatlinburg may have it a bit tough as he’s expecting 30% less snow than normal.

So the overall forecast is for temperatures that should be VERY CLOSE to normal all season long and with the HUGE increases in snowmaking technologies and systems at all of our ski areas, that should bode pretty well for a great ski and snowboarding season at all of the ski resorts.

Natural snow should be in good shape further north as we need to keep in mind that Snowshoe Mountain’s AVERAGE of 180" could end up closer to 230" or so if Brad’s forecast comes true!

Brad’s been our official meteorologist for a few years now and he’s definately one of us in that he LOVES SNOW! However, unlike some weather peeps – he’s a pro. He’s putting his words and voice to the test as (again) we archive everything. He’ll be hard pressed to match his dead on accuracy of last season, but let’s see how it all plays out. As for all of us – THINK SNOW!!! THINK COLD!!!

Previous Post
2010 2011 Winter Forecast for the Southeast and Mid Atlantic Ski Resorts
Next Post
SOME SNOW IS IN THE FORECAST FOR THE SKI AREAS FRIDAY AND SATURDAY!