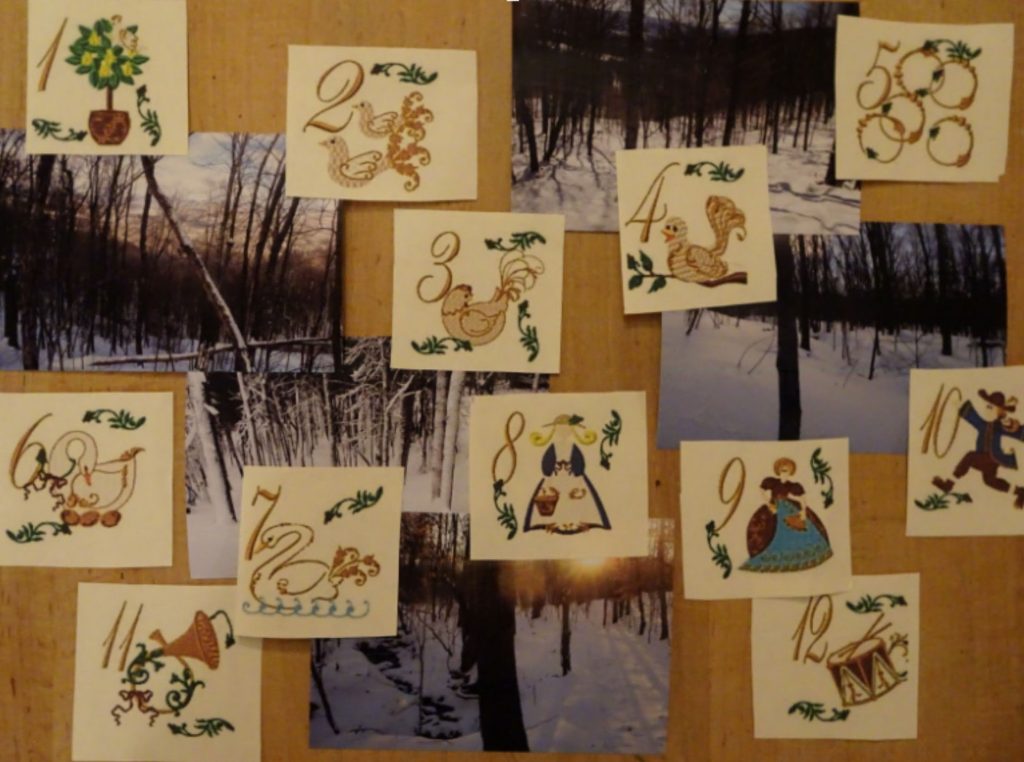 As I write this the smell of a baking Christmas ham fills the kitchen, the floor around me is drifted deeply with empty boxes and colorful heaps of crumpled wrapping paper. There was idle talk of being careful and saving the paper for reuse, but once the frenzy begins it’s difficult to think of something so distant as wrapping next years gifts. It’s pretty mellow around here now and after all the overwhelming energy spent in the lead up, now the melancholy of another holiday passed is starting to close in around me. But I’m not ready for that yet and choose to view this not as the conclusion but as the beginning.

Today is afterall the first of the Twelve days of Christmas, as Burl Ives happily reminds me. It’s getting colder outside and amongst my gifts is an excellent Osprey day pack that will replace the Coleman I’ve used on the slopes for the last fifteen years. I have logged a few good days skiing already but now we are moving into the heart of the season with the best two or likely three months ahead. Twelve day projections are perfect for carols though perhaps too many for reliable weather forecasting; but in the next ten days at least there is a lot to celebrate. Lords a-leaping, geese a-laying, maids a-milking, these things are all very well but I am much more interested in snows a-falling and temps a-dropping, and as others have noted all that is now arriving. I’d like to look ahead and with guarded optimism amend the refrain:

By the twelfth day of Christmas the mountains gave to me, Fresh Powder deep in the trees. 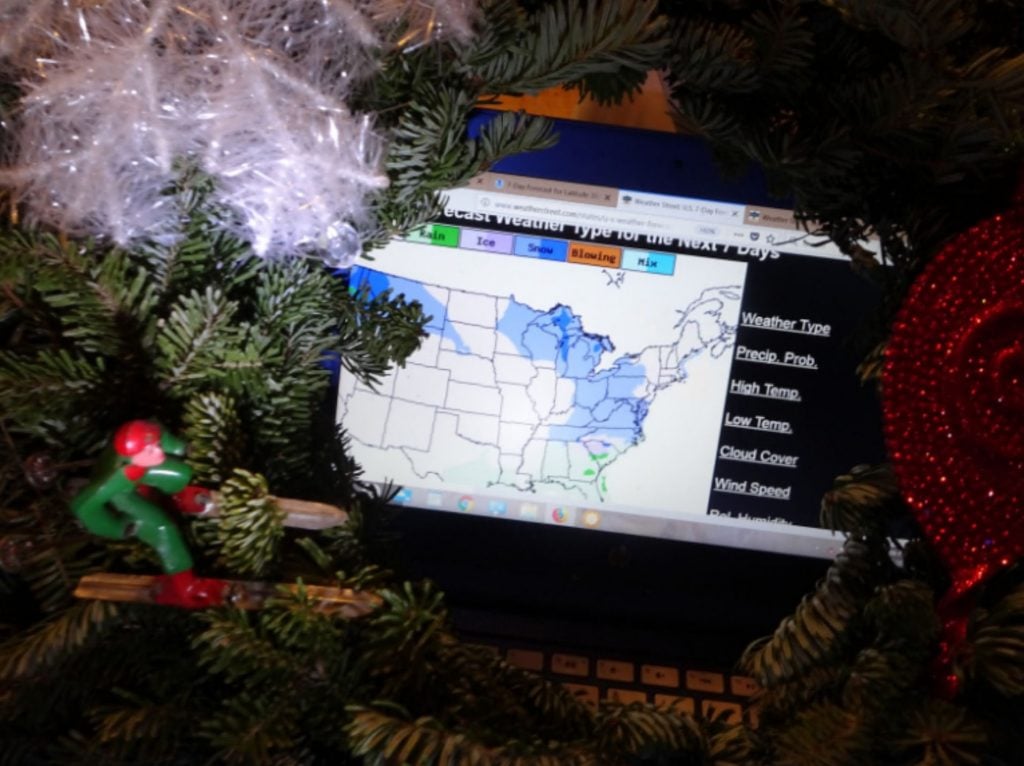 I love to see the phrase “a chance of snow showers” when it includes five frigid days in a row. Whatever falls, it will be lovely, cold and white; such is the forecast for Canaan Heights, WV which encompasses Canaan Valley Resort and Timberline. Wisp and Snowshoe are more or less the same; I think I know where I will be quite soon. I managed three mountains in two days with Wintergreen, Massanutten, and Canaan Valley Resort last weekend so after a pattern like this one, skiing at four places in three days is a worthy goal, and yes I’ll take another if I can get it. Carpe Skiem as Homer advised; I’m pretty sure I have that right. 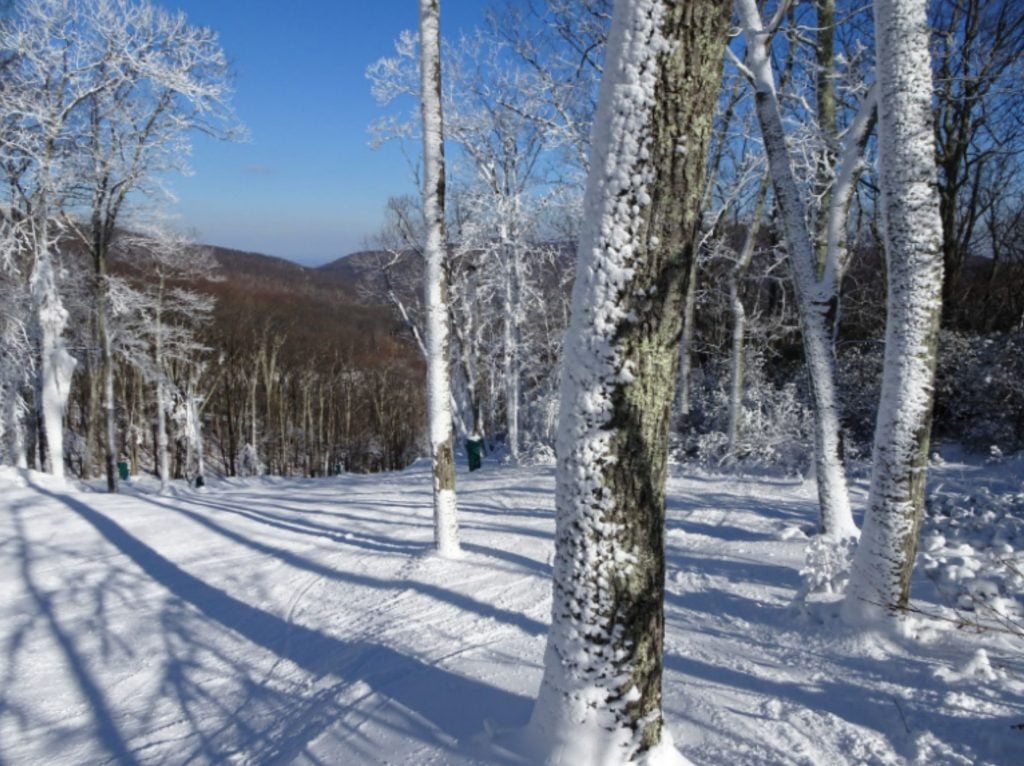 Wintergreen opening weekend
Wintergreen is a good example of what we can expect to see as this week progresses. On Saturday December 16th when I was there they had managed to just open the majority of their upper mountain runs, including Sunrise, a favorite of mine , to supplement Eagle Swoop which is the widest run accessed from the Big Acorn Lift. Despite the short warm up that tried to sneak in as a holiday spoiler, as of Christmas morning every run save one has now opened under the Acorn lift and that’s the solid base they have built for a 10 day forecast with highs significantly below freezing and most of the night time lows dropping to 10 degrees or below. I think Wintergreen and most of the region is going to find a very good use of the unwelcome rain that fell last week.

So for the next twelve days, probably lucky eleven as this posts, take full advantage of these conditions. We’ll see what gifts arrive after Twelfth Night but it looks like an exceptional start to the year.

Previous Post
Awesome Conditions as the Biggest Week of the Ski Season Begins!
Next Post
Holiday Ski Week is in Full Swing and the Resorts are Hopping!