Check the SNOW REPORT today for all of the details on today’s schedule as some ski area are not open Sunday evenings.

Saturday was the mildest day to be on the slopes since perhaps sometime in December. It was also VERY CROWDED at most of the ski areas. I can also report that today will offer more of the same. Surface conditions will be great in terms of coverage, and the groomers will have setup the snow with perfect corduroy at most locations. However, as skier traffic and the temps mild up – expect some heavy, granular conditions.

I’m Now Handing the Remote to You Guys Today

Today I am going to share a few notables and turn the ‘remote’ that is my keyboard, over to you guys today. I’ve received a LOT of comments and shares from you guys lately – so today stars you guys.

Patrick Kidda was at Snowshoe

Patrick Kidda shared some awesome shots from Silver Creek and Snowshoe from the last day or so. Patrick used to work with us years ago and he and his wife Starr are avid snowboarders. Here’s some great photos from Saturday. Click to Enlarge any. 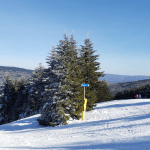 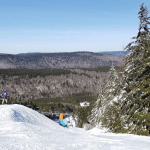 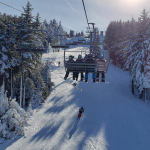 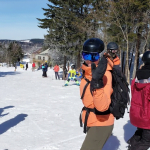 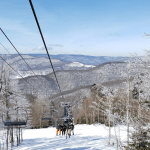 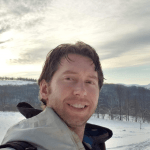 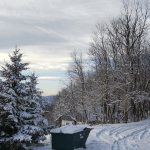 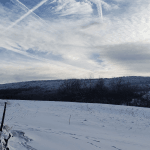 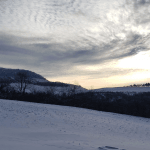 I mentioned Patrick’s wife, Starr earlier. She is quite the skier.

Back on January 26th, Patrick shared this:

It’s been a wild month and a half, but I wasn’t the one getting wild. The last run on the day I sent this pic I caught my edge on the cat track under soaring eagle lift at Snowshoe, landed on my back, and busted up my collarbone and had surgery that week.

I had my wife Starr convinced the only reasonable thing to do was go snowboarding so she flew to Denver the next morning and has racked up a really epic run.

Initially she got a good snow while in Steamboat, and I met her in Salt Lake City on Jan 11th and in a Purple Jeep Wrangler drove 1700 miles getting what’s reported to be, and felt like coming up on 10′ of powder. We hit the biggest storms of the season for Mammoth, Squaw, Snowbird, and Park City. Then I had to go back to work and she drove on to Jackson hole, where it has continued to dump!

Anyway, you keep representing and I’m heading to the Shoe this weekend.

Check out this map that Patrick put together….there are some awesome photos and comments on that link!

The proud husband also shared this insight. While on her trip, she did:

Man, Justin Harris has been the TOP PRODUCER of content of any ski area in the region this season and there isn’t a close second. Way to go Justin! (By the way, he and David McCue are making turns again today at Canaan Valley Resort.)

We don’t get a ton of photos from The Homestead. Wish we did as it is one of the most impressive destinations in the region. In fact, I’d venture to say we’ve seen more videos over the years than photography. We’ll have to work on that!

Other Emails, Shares and Comments

Kevin Sedwick remarked to my Facebook post showing how crowding things were on Saturday. He wrote, “Drove by at Beech. (They were) Parking on kite hill and shuttling to resort. Looks like a holiday weekend!”

Wink Windsor shared: “I’m happy the resorts are making some money. And I am glad I am retired and can hit the slopes during the week!”

Steve Skarupa posted, “Lift lines were crazy here at Snowshoe all day. They usually don’t start backing up until around 10am but today they were backed up by 9:10 a.m. Good thing I get to cut the line lol.”

He also posted this awesome photo of Lower Shays Revenge.

Happy belated birthday to our own, David McCue who is skiing both Canaan Valley and White Grass today. He will be at Wisp Resort on Monday.

David McCue is back in Davis, WV making some turns. Kind of like the way it is with Jim Cantore, but in reverse. With Cantore, you know if he’s visiting your town there’s a bad storm in the area. With McCue, you want him visiting your area, because you KNOW that means that’s where the snow is!

FEBRUARY is a HUGE Giveaway month for us. Stay tuned for those announcements any time now….

If you follow us via any of our social media links, you are automatically entered and eligible to win!

Snowshoe Mountain Resort – I just loved their promo today.
Super Bowl Sunday has arrived and if you can’t be there, you might as well be here!

It’s going to be a gorgeous day on the mountain with clear skies and fantastic snow that is ready for shredding. Get out there and carve it up today and get ready to watch the big game tonight. And if you’re not a Pats fan, Rams fan, or even a Commercials fan, then just head on down to Silver Creek for some night skiing. It’s commercial free. Widowmaker will be delayed today for a Southern Alpine Racing Association(SARA) event. Mountaineer and Evolution are open without park features.

Come join us in the Big Top this evening for a Super Bowl Party fit for the whole family!

Canaan Valley Resort
Today is another beautiful day at Canaan Valley Resort and State Park. Our mountain glowed yesterday and was full of life from the summit of Bald Knob, to the slopes of our mountain, to the tube park, ice skating rink, and cross country center. Everywhere you looked, family and friends were enjoying all that we have to offer and creating their own winter memories on a perfect snowy day. Today will be no different here in Canaan Valley.

We will be starting our day with 24 out of 47 trails available to ski and ride on. Our ski patrol will make a 9am assessment of our natural snow trails and we will update our web page at 10am with additional open trails.

Wintergreen Resort
Pretty Perrrrrrrfect, Again!
Get out the sunscreen, peel off a layer and head to the mountain today! It’s going to be another great day on top of the Blue Ridge. Mostly sunny and spring-like temperatures. More importantly, ALL 25 of our slopes are open for the most excellent skiing and riding.

The rental team is offering a free ski and snowboard inspection. Stop by and make sure your equipment is in tip top shape. And if you want a machine wax for your equipment, it will only set you back $5 today.

Appalachian Ski Mountain
ASM is hosting the USASA Boarder /Skier X event Saturday & Sunday, Feb 2 & 3. The Appal Jam terrain park will be closed until the event is over, probably around 4pm.

Canaan Valley Resort – Part 2
This morning was the first since January 24th without any measurable, natural snow and only the THIRD such morning since January 8th! It has been a snowy month in West Virginia.

Ober Gatlinburg
Sunday Night 1/2 Night Special – $10
Ski or Ride for only $10 on the first Sunday of each month
That will do it for today.