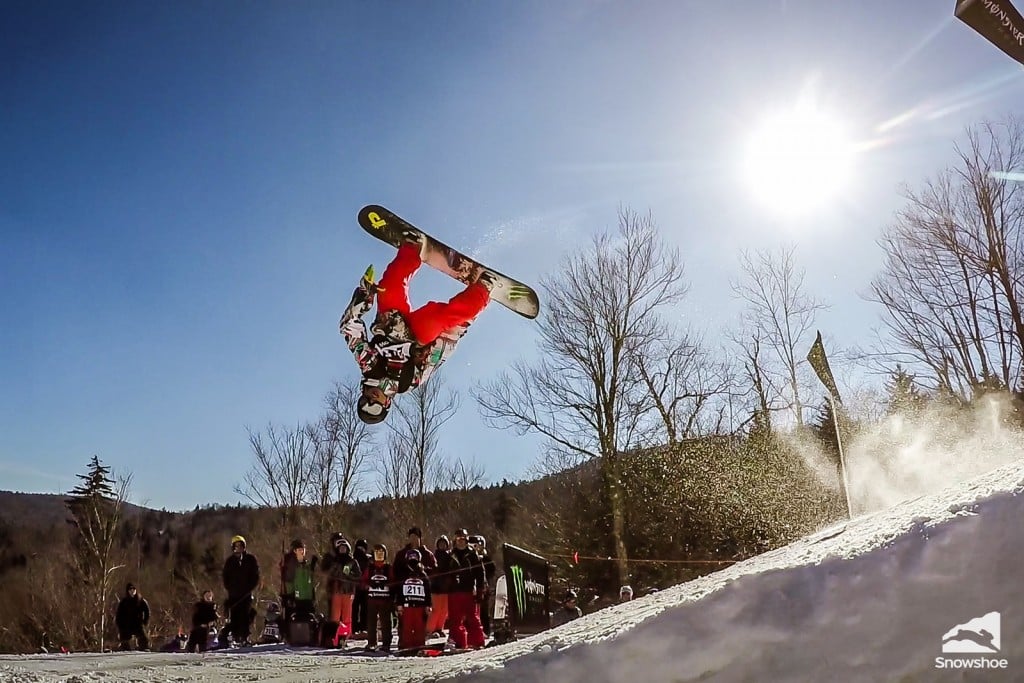 We have lots of sunshine this morning.  Yesterday sure was nice.  Temperatures at some of the ski areas rose into the 50’s yesterday.  Down here on Lake Norman just north of Charlotte, I got off work and looked at the temperature and it was 73 degrees!  It felt great to do my afternoon run around Davidson in shorts and a t-shirt.  This is always the time of year when people off the mountain get a taste of warm weather and forget that there’s still a ton of snow at the resorts.  My grandma always thinks I’m crazy when I tell her I’m going snowboarding in late March.  Her response, “There’s snow in the mountains still?” Happens every year.

I was going through the webcams this morning and some of them have some great shots that show just how much snow is still on the slopes.  They really show off some of the great base depths right now.  For instance, take a look at the Wisp Resort cam.  I drew a very fancy arrow to show you what I’m talking about. 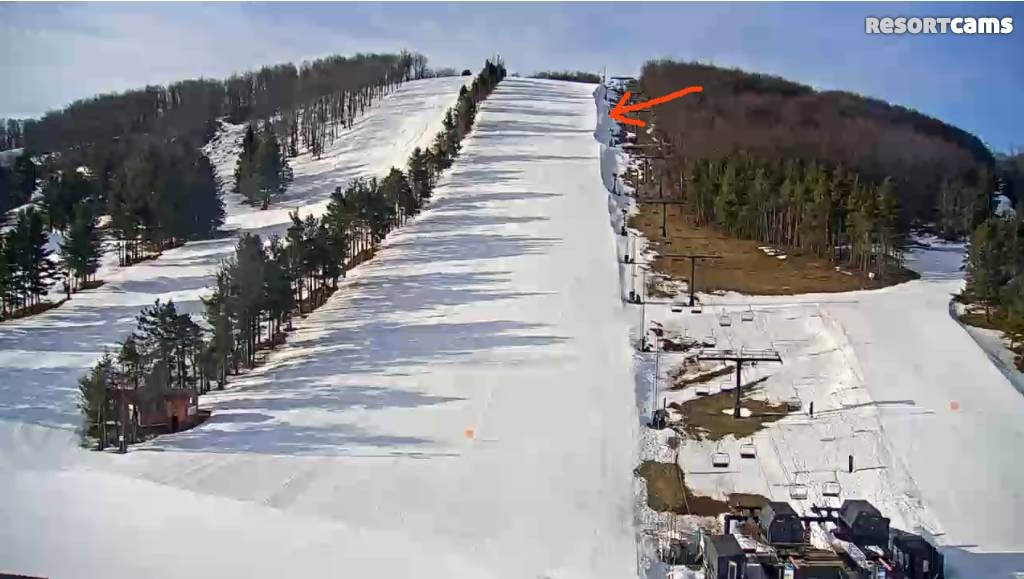 That is a thick slab of snow at the mountain!  The snow depth up there looks almost as tall as the snow guns which are on poles.  Wisp can push that snow down the mountain and easily spread it out over the coming weeks.

Here’s another example from Snowshoe, specifically looking at the Shaver’s Centre cam.  Once again, you can really see just how thick the slab of snow is.  That’s easily 4-5 feet thick. 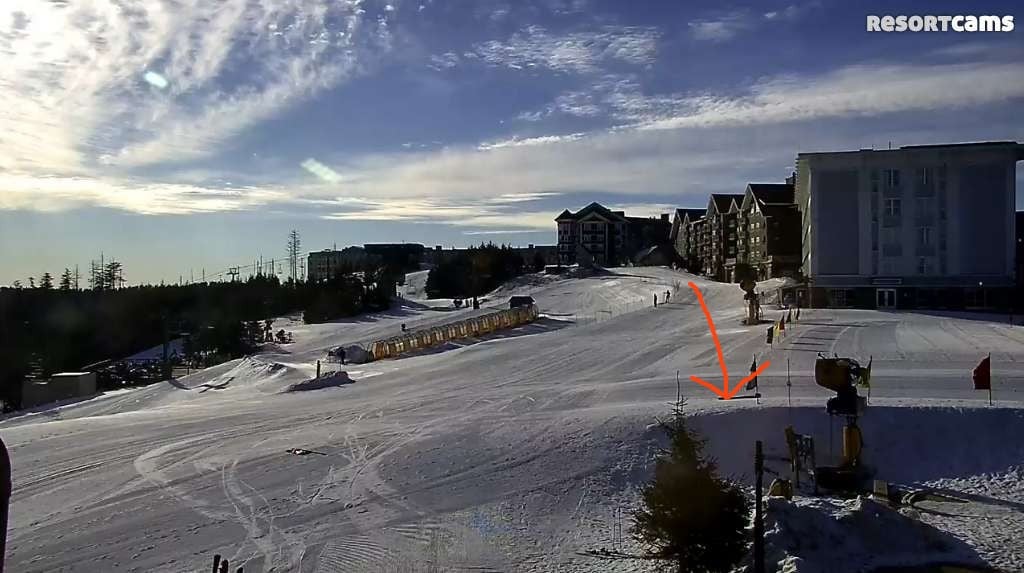 Many of the resorts have similar looks, they just aren’t quite as visible on the webcams.  What I’m getting at here is that there is still plenty of snow to be had for at least the next few weeks.  Don’t let the calendar fool you into thinking otherwise.  March is always a great time to go skiing and riding.  There’s usually discounted lift tickets, such as March Madness rates at Beech Mountain, and the crowds are wayyyy smaller.  It’s a great month to get into the sport as well and learn how to ski or snowboard.  Basically, get out there and get some turns!

As evident by those two webcam shots I posted above, it’s sunny again this morning and on the cool side.  Every resort was above freezing this morning and thus, no snowmaking.  Colder weather, and a bit of snow for some, is on the way though but we first have to get through some rain tonight before a changeover to snow for the NC and WV resorts late tonight and tomorrow.  It looks like 1-4″ is a good bet for West Virginia and a dusting to an inch or two at best for the North Carolina ski areas.  Here’s the current NWS forecast for snow over the next 36 hours. 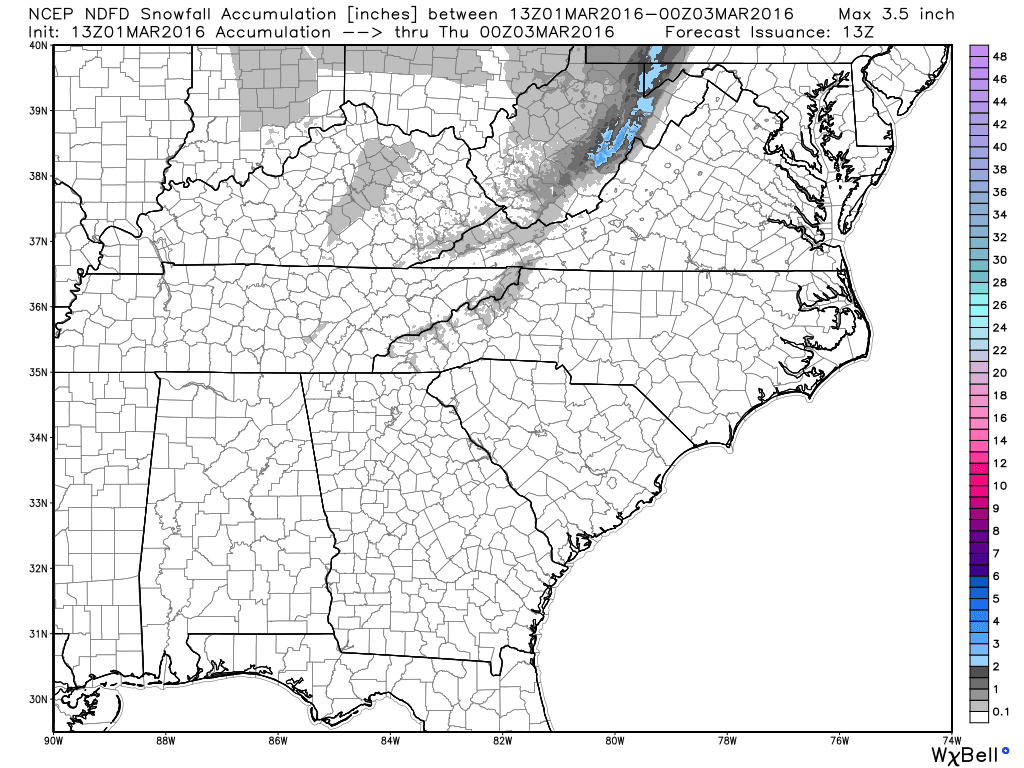 Tomorrow is going to be MUCH colder, with temps running a good 20-25 degrees colder than today.  I am interested to see who makes snow tomorrow night and beyond as it looks like it will be possible at least at night for the rest of the work week.

Wednesday and Thursday sees continued colder conditions before another mini-snow event on Thursday night.  It’ll be another few inches for North Carolina and West Virginia.  I was looking at the NWS forecast discussion for Snowshoe and they mentioned 2-4 inches Thursday night.  That would make me very happy as I plan on getting first chair Friday morning at The Shoe.  I would love to get some sprays in first thing Friday morning.

The weekend still looks great with cooler temperatures and a decent amount of sunshine.  As I mentioned yesterday, next week looks warm but we won’t worry about that right now.  Full disclosure, it’s also hard for me to personally worry about next week right now as I’ll be in Tahoe and it looks like I might score big time with some powder!  Woo!

I won’t talk too much about the Summit today as I’m sure some of ya’ll get annoyed by me mentioning it everyday, but we’re only 3 days away now!  We’ve got some swag to give away on the slopes including stickers, hats, and shirts.  Here are the hats…

Making some hats for our friends @SkiSoutheast for their annual ski summit @snowshoemtn this coming weekend. pic.twitter.com/3DnbVThWSw

Click the link below to get more info about the discounted lodging, free lift tickets, and First Tracks on Sunday.  It’s going to be a good time!