Sunday Will Another Sweet Day to Ski & Ride 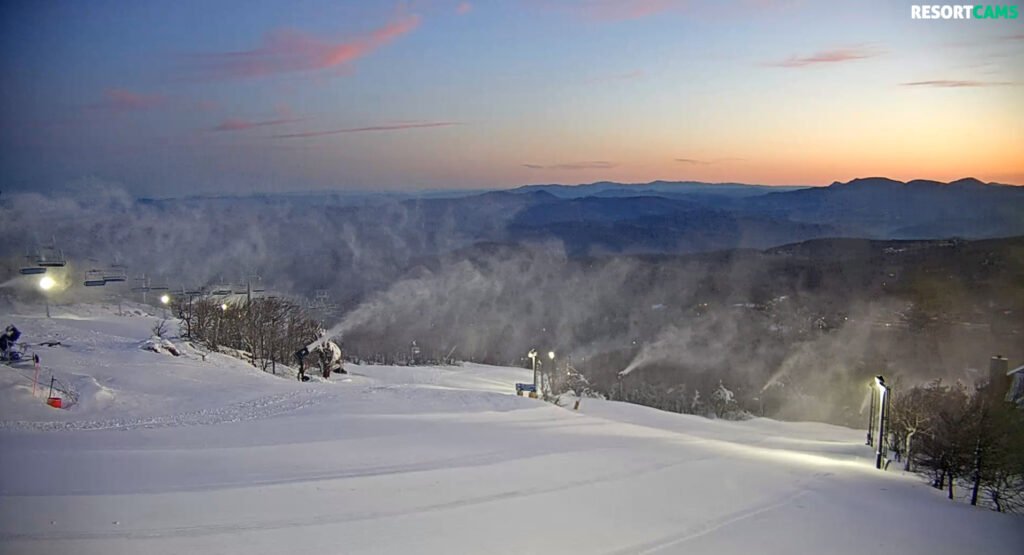 Sundays are my days to ramble…

Today is the first time in my memory that I posted two other reporter’s content before my own! Way to go Joe and Brian!

Speaking of “Joe” – Joe Stevens posted a nice story and even MORE awesome lead photo of him and ‘King Richard Petty’. Check it out.

Brian Dix posted a REALLY nice report from his day at Wolf Ridge Resort last week. Check that out

That was probably one of the sweeter reports from Wolf Ridge Resort that I’ve read in a while. Very cool.

…and NOW, Back to Your Regularly Scheduled Visit with Me…

As I checked the reports, weather and temps across the region this morning all I saw was blue skies, beautiful sunrises and temperatures that ranged from 25° at Canaan Valley Resort to 37° at Ober Gatlinburg. Most of the ski areas were experiencing temperatures that were hovering around 30° and only FIVE of the region’s FIFTEEN ski resorts were making snow. (We have sixteen total with Timberline taking this season “off” and seventeen if you want to count Oglebay in Wheeling, WV (but I don’t)).

The BEST NEWS for skiers and snowboarders is that temperatures will be moving up into the mid 40s and we’ll even see some upper 40s and low 50s for high temps today. So there will be lots of great snow to ride, perfect temperatures to enjoy them and no snowmaking to battle.

Feel free to Check the Full Snow Report for all the deets. Sunday is my day to ramble with whatever my stream of consciousness looks like for today.

I’ll start my ramble today with some positive vibes.

Beech Mountain Resort has been killing it this season. Ryan Costin and his crew have been pushing all of the right buttons at the right time this season and they are being rewarded with a very nice season. We all know how challenging this winter has been in terms of consistent snowmaking opportunities, etc., but Beech has consistently been on top of their game this season. Probably the most consistent conditions of the High Country ski areas this season.

Our own Lisa Clough was at Beech on Saturday and she said that the slopes, village and shops were “the most crowded I’ve ever seen.”

I know that they were shuttling people from the parking areas across from Town Hall again yesterday and they’ve had to do that really every weekend this season.

I should add that all of the resorts in the region have done a yeoman’s job this season and all are doing quite well in terms of fighting the challenges of this winter and providing consistently great conditions – but Beech Mountain Resort is standing out to me. This has been a stellar season for those guys and the vibe up there is that they have really upped their game over the last few years and they are being rewarded for it.

I’d also have to mention Cataloochee Ski Area in that same breath as they have managed to offer consistent base snow and slope conditions AND they’ve been able to open up their entire mountain a few times this season. They have been 100% open (all 18 trails) this weekend.

As Brian Dix pointed out in his snow report (mentioned earlier), Wolf Ridge has really only HAD very limited days and nights this season where they could make snow and yet they have kept their core slopes open and in good condition. It was nice seeing the good natural snowfall enhance things on Thursday and Friday.

Appalachian Ski Mountain has probably had to fight the hardest of all of the ski areas in the region. They are also 100% open and there are many who would argue that they are small enough to be able to concentrate snowmaking across a smaller amount of acreage. However, as we have reported all season long, they have also received THE MOST rainfall of any resort in the entire region – exceeding 3″ of rainfall within three separate weather events. They’ve had ‘rivers of water’ take out slopes and managed to rebuild several times.

All Those Struggles Are in the Rearview Mirror – it seems.

Obviously we’ve been on a nice run these last couple of weeks and weekends now with consistently cold temperatures and even about a foot of natural snow that has fallen over the last 2-3 weeks.

That has allowed ski resorts to blast away at the slopes to create the best conditions of the season – right now and according to Meteorologist Brad Panovich, we are looking at a nice week ahead with some more chances of natural snowfall AND very cold, very nice temperatures for the week and weekend ahead of us.

Perhaps Another Mention or Two About Our SkiSoutheast Snowshoe Summit

We are up to 147 people coming to the Summit next weekend. There is still time and LIMITED availability for anyone wanting to come and join us!

BACK TO SOME OBSERVATIONS…

A bit of negativity for a second…

I REALLY REALLY wish that all ski resorts would implement a single-digit base depth reporting model. None of them used to do it. I’ve advocated for it for 20+ years. Now it’s cool to see Snowshoe, Bryce, Massanutten, Wintergreen, and Wisp using that system. (For the record, I am NOT taking any credit for the change.)

Years ago I used to write about far-fetched base depths being reported nearly every other day. I kind of gave up the fight on that one because if a ski area reports a base of 16″-80″ they COULD be saying that some of their slopes have 16″ and that there ARE locations on their mountain where they’ve created a whale of 80″ or more. …and by logical extension of thought, there is an average of around 50″ or so across all their terrain.

THIS SEASON has been so volatile in terms of the weather, that we haven’t seen huge exaggerations – until NOW.

That OBVIOUSLY leaves only the North Carolina ski resorts as “enhancing” their numbers and (again) none are doing so as obviously as is Sugar Mountain Resort with a report this morning of 45″-93″. That is two feet more than the second highest report in the region this morning. Of course, (according to them) they are the only ski resort in the entire Southeast and mid-Atlantic that is experiencing a near-normal, natural snowfall season (and that isn’t happening either).

I skied there on Monday and I can tell you that I had the best time skiing that I’ve had this season. The snow was wonderful. However, I will also tell you that numerous places on Upper Flying Mile barely had a foot of snow coverage in the middle of the trail. Ditto for Oma’s Meadow.

As Joe Stevens always told me, “We only need a few inches of snow under us to have an awesome day.”

…I just don’t understand the huge spikes in base depth that we’ve seen in the last week. Some of our ski resorts are reporting base depths that resemble those of Mt Hood and that just isn’t the case.

Back to Some Positive Vibes.. 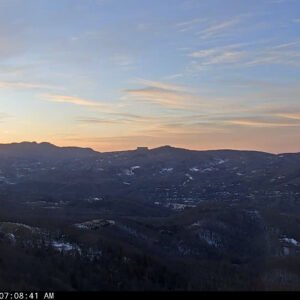 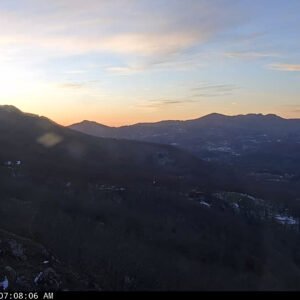 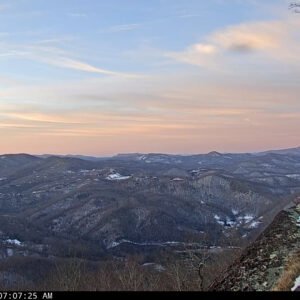 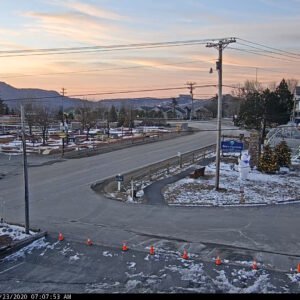 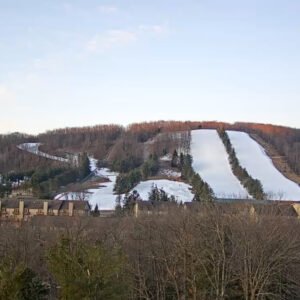 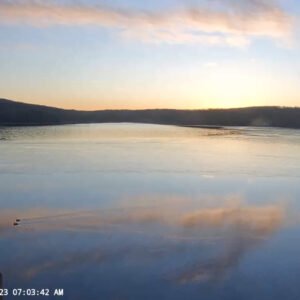 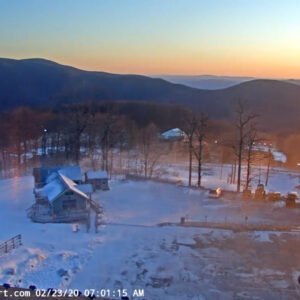 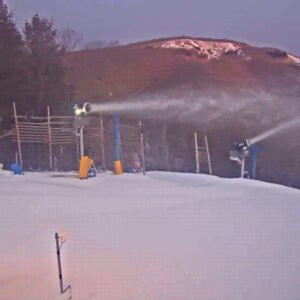 Today will be another sun screen kind of day, highs in the 40s and near 50. Excellent skiing and riding today!

Beech Mountain Resort was hosting some races on Saturday and by the looks of the snow report this morning, they dropped Robbins Run (upper and lower) from being open today. Must be racing on it today as well.

Canaan Valley Resort – heard from a couple of peeps who are playing at CVR this weekend and they wrote, “I cannot tell you how much I love Canaan Valley. What a great find, beautiful place. Gravity and also Lower Valley Drop are now two of my favorites.”

Cataloochee Ski Area – They are 100% open today. Alley Cat Race Trail will be closed for racing to the general public until the conclusion of the middle and high school race finals today.

Editor’s note: Anyone know if Tammy Brown is still working at Cataloochee?

Massanutten Resort -Diamond Jim will be closed on Sunday morning for USSA race. Geronimo will also be closed this morning for adaptive ski event.

Snowshoe Mountain – 54 trails – That’s the most in the region by a long shot,. The Berming Man Banked Slalom course is still set up on Spruce, and will be open to the public today. Evolution is open without features (except some whales!) Mountaineer is sporting a “family-cross” course that is loads of fun for all ability levels. Mark your calendars! This year’s Ridiculous Pass sale starts on March 5.

Wintergreen Resort
They welcome the USCSA to Wintergreen on Saturday and Sunday. There will be 10-12 local colleges participating in the competition. The race will take place on Sunrise which will be closed to the public and will reopen this afternoon.

Bryce Resort – I’ve heard from a few diehard fans of Bryce about us not showing a lot of content from Bryce this season. We have shared what we can get our hands on, but there’s just not much coming out of Bryce regularly. Their own website is promoting “the week ahead” but from February 17th. They ARE 100% open and by all accounts they’ve had a nice season. Just not much ton share.

I’ve lived my entire life in Florida and my daughter and myself have never seen snow! I can’t wait for my valentines weekend trip here to see snow and try out skiing for the first time every!!!!! So excited!