A Bit of a February Thaw…Til Mid Week. Then Cold Returns with Some SNOW! 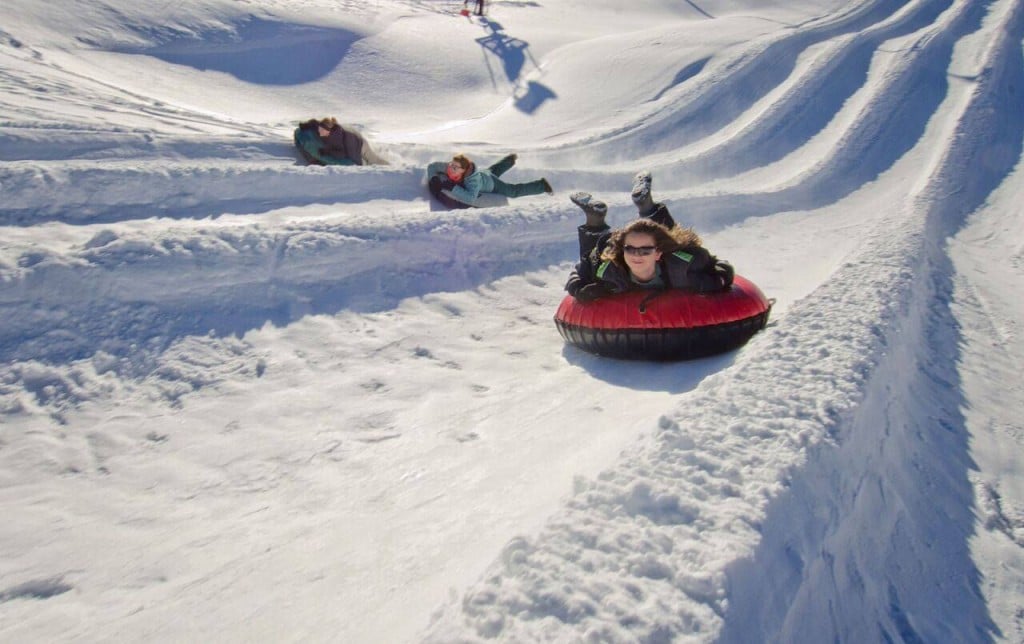 I’m not going to rehash how poorly this season got started. That would reopen some wounds that were no-doubt felt across the entire east coast. However things have been pretty cold and snowy since January 4th or 5th with only a bit of rain and mild temps since. 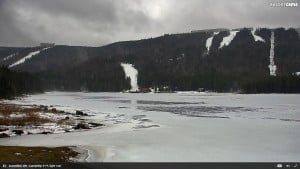 This shot from Snowshoe’s Basin Cam this morning shows lots of snow on the ground. Click to ENLARGE

The last couple of mornings have been very mild with lows in the mid 40s and things are even milder this morning. That has prompted more than a few emails from our visitors asking for our appraisal of how much snow would still be left on the slopes by such and such dates…(insert your own date).

What I CAN tell you is that there is STILL SNOW in the ground in the woods here around my home. I drove over to Blowing Rock last night and there was lots of snow on the ground along the Blue Ridge Parkway. There’s actually an AVERAGE OF THREE INCHES of snow for those of you who would like to go CROSS COUNTRY SKIING up in Tucker County, Davis, West Virginia – at Canaan Valley and Timberline Resorts.

Remember that you guys can visit: http://www.resortcams.com/ski-cams/ anytime to see all of the LIVE webcams for yourself!

This, my snow-loving and mild-temperature-anxiety-filled-friends is the 52nd consecutive day with NATURAL SNOW still on the ground here in the higher elevation mountain towns of your favorite ski resorts.

So the answer to the question of, “Is there snow on the slopes?” is OMG, YES!!!!

While slope conditions are in the LOOSE GRANULAR to WET GRANULAR variety for today, there is a ton of snow on the slopes. A good average of base depths across the region would be in the 30-50″ area.

COLD IS RETURNING MID WEEK WITH SOME SNOW…

We’ll see a continuance of these mild temps today through perhaps Wednesday with highs in the mid to upper 40s until things dip in the teens, 20s and low 30s by Thursday – lasting into the weekend.

So NEXT WEEKEND should be epic with a mix of clouds, cold temps and some snow. Snowshoe Mountain could see another 3-6″ and many of the WV and NC mountains could see some nice snow. Nothing major…but snow nonetheless. 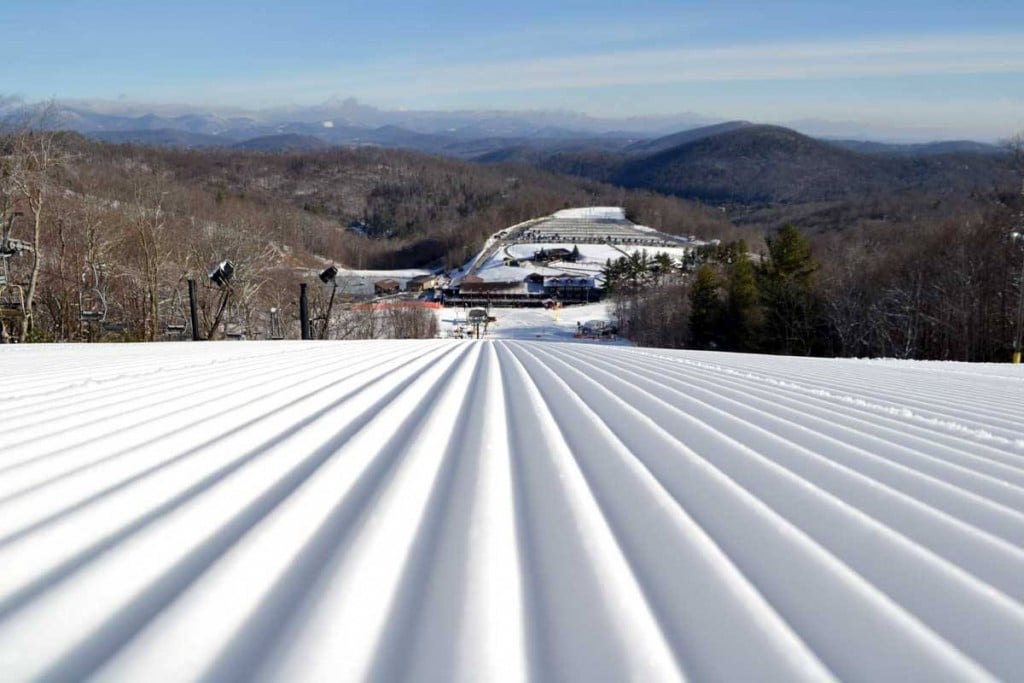 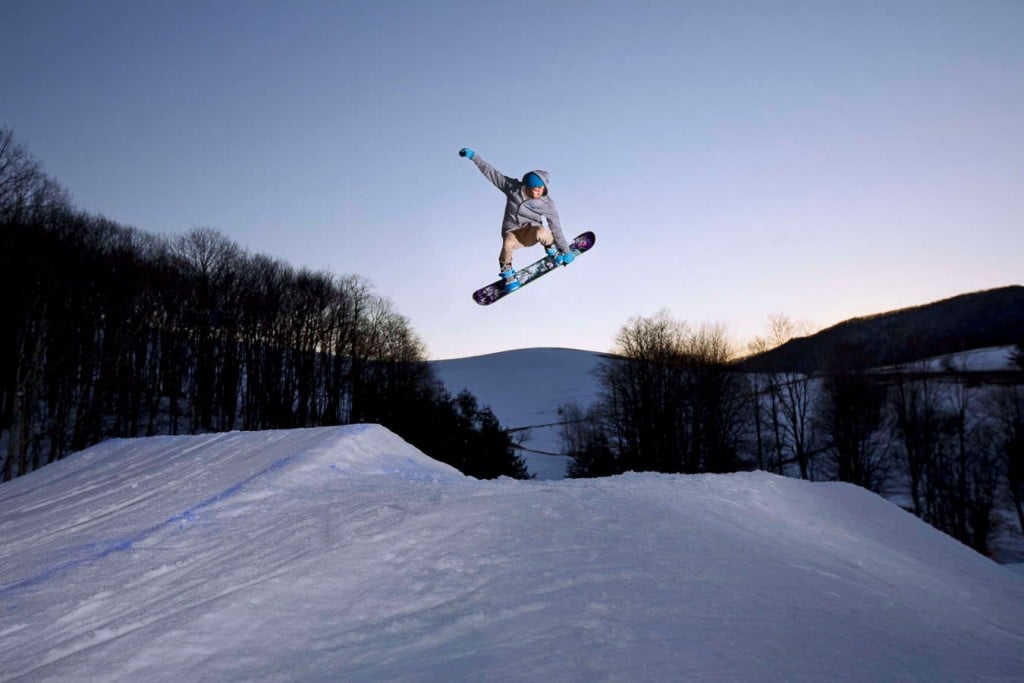 Awesome Photo from this Week at Cataloochee. Click to Enlarge! 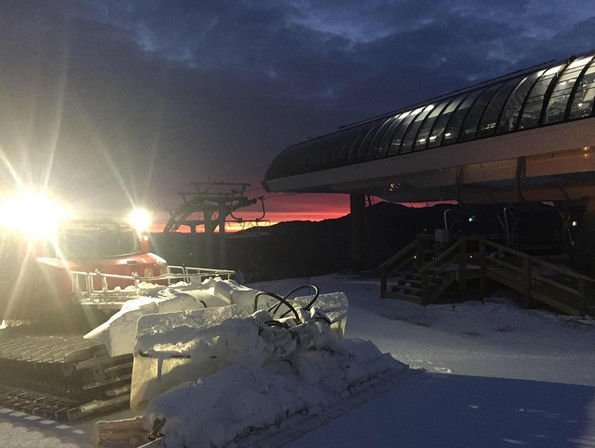 Cool sunrise photo from Sugar at the top of their new lift from three days ago.

MASSANUTTEN’S Newest Apres-Ski Attraction!
Located outside of the Ski Lodge, this 5,000 square foot wooden deck houses a bar completely covered by one large, weather-proof umbrella. This indoor-outdoor eatery is the perfect location to enjoy a warm beverage, a cold beer on tap, or an after-ski meal. 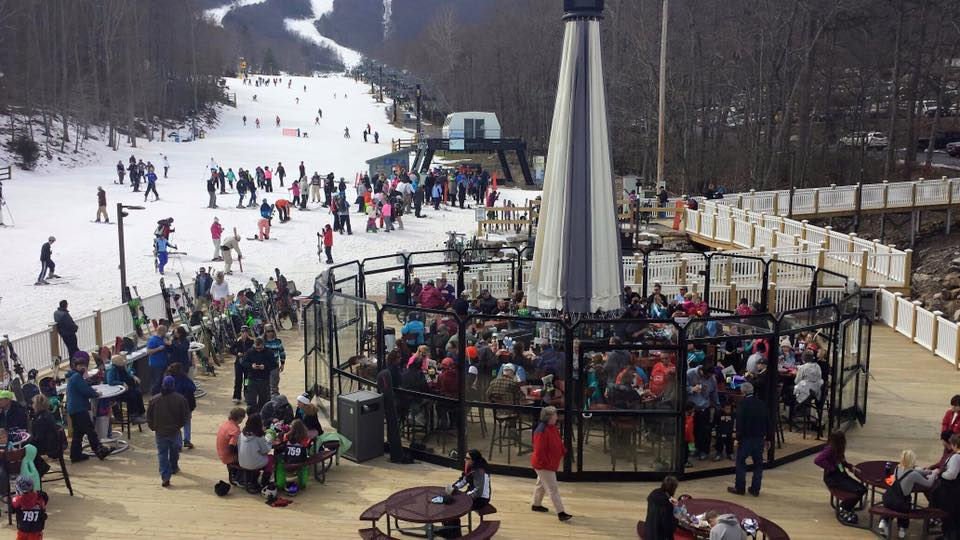 Massanutten Resort’s new “BASE CAMP” gets a LOT of attention. Great photo from this week! Click to enlarge!

SOME NOTABLES NOT TO MISS FOR TODAY… 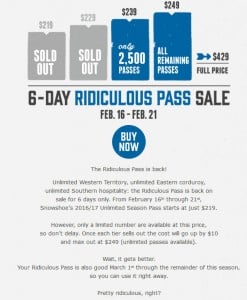 I know that a lot of our messageboard peeps take advantage of this deal every season as truthfully it pays for itself the third time you use it.

Don’t miss this great chance to SAVE HUGE. Today is the last day. 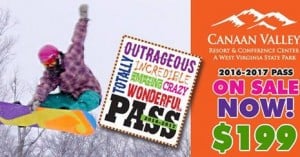 CANAAN VALLEY’S GREAT DEAL AT $199!
It’s here! Get your 16/17 Season Ski Pass for just $199!
Purchase at the ski area ticket office or mail the application. Offer valid for a limited time only. http://canaanresort.com/winter/ski-resort/ski-season-pass/

This is an awesome aerial video that shows off their aerial tram that takes guests from downtown Gatlinburg to the top of the mountain. It is an awesome video, but has kind of a retro feel to it.

I feel obliged to report on the incident that happened on Saturday. Thank God only nine of the twenty-five people who fell from the chairlift on Saturday morning were hurt. Seven of those were treated at the scene and they left on their own accord. Only TWO were taken to a nearby hospital and they were reported to be in good condition with non-life threatening injuries.

I watched an ABC NEWS report of the incident where they reported EXACTLY what I just shared above and the pics are the same ones we shared yesterday. No video to speak of was shared except some “non-enlightening” 20 second iphone clips. In fact the ABC NEWS page showed a video of an incident in Canada where a child was dropped from a chairlift that had NOTHING to do with the Timberline Resort incident.

We shared that here: https://www.skisoutheast.com/timberline-resort-releases-statement-on-chairlift-mishap/

I read some other regional ski reporting services comments and to be honest the feeling that I got was that SOME people were actually taking some delight in this situation as it offered some means of talking negatively about Timberline. To be clear – nobody took pleasure in hearing that 25 people fell or that about 100 people were stranded for 1-2 hours. However, I received more than a few emails from people up that way that seemed to be using this incident as a means of trash-talking Timberline.

I don’t like that sort of thing. You never want to kick someone when their down. The fact is that lift mishaps are not all that unusual. They happen every couple of years or so nationwide. THANKFULLY, anything other than minor injuries are rare.

This particular chairlift mishap could have been much worse – but it wasn’t. Period. End of story. There’s nothing more to “write into this story”. Timberline, like ALL of the ski areas nationally and within our coverage area, have routine inspections that are mandated.

“All of Timberline’s lifts undergo thorough and rigorous inspection in a timely fashion and are in compliance with all applicable safety standards, including federal guidelines for maintenance and annual mechanical inspection and the strict safety requirements of Timberline’s insurance provider,” Timberline Four Seasons Resort said in a Facebook post on Saturday.

“Daily maintenance checks are performed each morning by resort staff, and ski patrol rides the lifts and completes a visual inspection of Timberline’s lifts before they are opened to the public,” the resort said, adding that it has a mechanic on staff for “routine service.”

“In our 30 year history, Timberline has never had a lift failure resulting in injury or in any way comparable to today’s malfunction, and the resort will continue to investigate the cause of this incident to ensure the safety of our skiers,” the resort said.

Kudos to the combined ski patrol crews from Timberline Resort and neighbor Canaan Valley Resort. Added kudos to the emergency response crews from the local fire department. It is awesome to know that there are great contingencies ready and able to move on situations like this.

That’s going to be IT for me today! 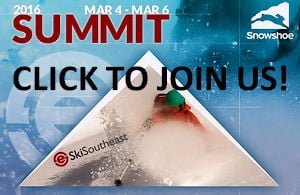 Be Sure to JOIN US for the HUGE GROUP SKI AND SNOWBOARDING WEEKEND MARCH 4th-6th AT SNOWSHOE MOUNTAIN. CLICK FOR MORE INFORMATION! GET 20% OFF LODGING! FREE SUNDAY LIFT PASSES! FREE GIVEAWAYS!