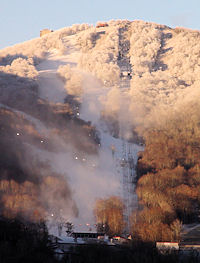 Snowshoe Mountain in West Virginia may have been the first ski resort in the region to make snow (as they usually are). In fact, there is no question that Snowshoe has made the most snow and had the most natural snowfall so far during this "preseason". I'd add that Snowshoe HAS THE MOST BASE put down in preparation for their opening day which will come on November 27th.

Cataloochee also made snow for the last couple of days and will open for the season TOMORROW, November 14th, 2013. Cat's LIVE CAMS show some nice coverage this morning and good gravy they are making a ton of snow.

We've heard reports that Beech Mountain Resort made snow yesterday which signals that THEY too are ready to crank up as soon as they desire to do so. Beech plans on opening Thanksgiving Weekend. The LIVE CAMS up there at Beech are some of the best that we offer via our ResortCams.com website. I REALLY love the Beech Slopeside views…HOWEVER those cams will not be LIVE until Friday due to the fact that Skyline Telephone went up and cut Charter Cable's main cable going into that area yesterday. So THAT, my friends, is why those cams are not generating snowy shots today!

KENNY AND TIM (AND I'LL BET A LOT OF YOU GUYS) ARE SURPRISED THIS MORNING... 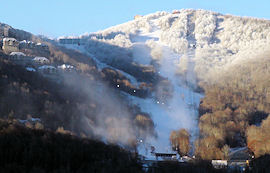 This IS my first post of the new season as Kenny Griffin and Tim Bahlke have been handling all of the "talking points" thus far. Both of the guys connected with me this morning as Kenny first texted me with a surprised "Sugar is Open!". I heard from Tim moments later and suffice to say that both were caught off guard a bit.

I guess I've been doing this website so long that news just finds its way to me because on Tuesday my wife saw Len Bauer from up at Sugar when they were picking up our daughters from basketball practice. Len is a great friend and he is all too aware of Gunther's – shall I say "lack of love for this website" – and even so he pulled my wife to the side on Tuesday afternoon and said, "I'm sure Mike already knows but I'm thinking we'll be open Wednesday morning."

"THINKING" was a "hint word" because if Sugar is open (which they are this morning) Len has to man his post as the Ski and Snowboard School Director. Len's been at that post for 33 years now…so when he says "I'm thinking that we'll be open" he really means, "We're opening."

Last night yet another Sugar Mountain connection texted me, "You ready to hit the slopes?" I responded, "Anytime." He replied, "Tomorrow". That was Ron Kent, a local realtor friend of mine who shares my personal passion for all things snow. Ron and I ski Sugar together occasionally and I'm expecting a series of texts flooding my phone this morning.

SO SUGAR IS OPEN AND LOOKING PRETTY SWEET ACTUALLY…

When Snowshoe and the West Virginia resorts started getting moderate natural snowfall on Tuesday I began watching the webcams and could see that those resorts already had 2-3" of snow. We started seeing snow out of our windows here at our offices mid afternoon. I fully expected Sugar to be reporting 2-3" of snow and had already prepared myself for MY first post of the season to be:

You know that Ford commercial that says "AND is better"? I figured Sugar's first snow report of the season would be "Two inches of snow AND we're open". HOWEVER, I'll admit to being pleasantly surprised to see that they are reporting a "DUSTING" of new snow and two trails open being serviced by one lift. They are open to their 3/4th station. So there's no trick…only the TREAT of skiing and snowboarding for the "OFFICIAL FIRST DAY OF THE 2013-2014 SKI AND SNOWBOARDING SEASON".

Cataloochee will follow suit by being the SECOND ski area to open tomorrow at 8:30am.

HERE'S THE "DEETS" ON SUGAR TODAY….

I'm certain that Kenny and Tim are "vibrating" and ready to hit the slopes now and they'll be updating you shortly. Stay tuned for more pics and updates and I'll be around as well.

Previous Post
Southeast Ski Season is on its Way!
Next Post
Sugar Mountain Starts the 2013-2014 Ski and Snowboarding Season for the Southeast and Mid Atlantic