Friday! The weekend is almost here! I am ready for it. This has been a long week. My concept of what day it is has been all kinds of messed up this week and yesterday felt like Friday to me for some reason. As some of you know, I migrate between Charlotte and Boone so my weeks involve a lot of driving and my days run together sometimes.

I will be headed back to Charlotte this afternoon and have decided to skip snowboarding this weekend. Quite frankly, it is looking pretty rough at the ski areas on the cams this morning and I think I will just wait until next week to get some days in. I hate writing that, but I’m just telling it like it is.

The good news is that we can look forward to some colder weather this weekend. A frontal system is moving through today and behind it we can expect yet another quick blast of cold air. Ski areas across the region should be able to make snow this weekend. A few will be able to do so around the clock on Saturday and Sunday, but everyone will be able to lay down some manmade goodness during the overnight hours. Snowshoe, Canaan, and Timberline are even expected to see some natural snowfall.

The forecast for Snowshoe over the next few days looks promising! >>>>

So, even though we’re seeing some sub-par conditions right now, I expect things will look a whole lot better come Monday morning when I get in the office to do this report. 48-60 hours is all it will take for the ski areas to drastically improve conditions. Snowmaking here in the Southeast never ceases to amaze me. Oh yeah, and if you do decide to get some turns in this weekend, PLEASE don’t complain about the snow guns. That is one of my pet peeves and I constantly see it on the messageboard and on the Facebook pages of the resorts. I know they can be annoying, but the resorts need to make snow for as long as possible at this point in the season, especially this year.

App, Beech, Cat, and Sugar will all remain open this weekend. We’ve seen a decline in the number of trails open here in NC as the week has progressed, but expect that number to jump back up by the end of the weekend.

-App will be hosting their first Fresh Friday event tonight from 5-8pm.

-Beech will join the other 3 and begin night skiing for the season on Saturday. They are also celebrating the grand opening of the Roots Rideshop tomorrow by having an all-day mega sale, demos, Rail Jam, and they will be premiering the TGR ski flick One for the Road as well. In addition to all that, The Beech Tree and Ice Skating will also open up for the season. It should be a really fun weekend up there.

"Due to the unseasonable weather, The Roots Ride Shop Grand Opening has been postponed to January 7, 2012. The resort believes the change in date will coincide nicely with the other Winterfest activities.

The Beech Tree Bar and Grille, Munchies, and Ice Skating will not open until further notice.

Beech Mountain Resort apologizes for any inconvenience and plans to produce snow as temperatures allow.

Beech Mountain Resort is looking forward to a great weekend and is thankful for the continued support of their customers."

-Tubing will re-open for the weekend at Cat. The base cam looks really good up there right now! 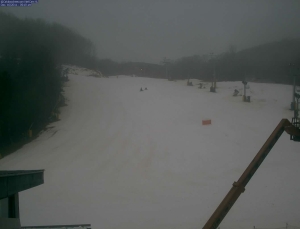 <<< For having such bad weather lately, the base of Cataloochee is showing some really good coverage.

-Snowshoe remains the only ski area open in the state today. Here are their morning comments…

"We’ll hit 50 acres of terrain today with the addition of Gandy Dancer, and mother nature is promising a chance of fresh snow tonight and into this weekend! We also had the guns back on this morning with the return of favorable temperatures, so we’re looking to continue to expand our lead with the most open terrain south of Vermont. We’re also kicking off the holiday season at Snowshoe this weekend, so be on the lookout for Santa and his friends around the mountain. The tubing hill is planned to open this weekend at Silver Creek and Saturday Mountaineer Parks and SPY will host the Early Season Rail Jam on Skidder! Spruce Glades is open as an intermediate trail with a fenced terrain garden, and the Progression Session Park and Robertson’s Run are open as beginner trails. As we expand terrain the park crew will start building those areas out. Get up here!"

-Timberline is supposed to open tomorrow but I’m thinking that might change. I wish they would get the new web camera up and running so we could see what it looks like up there!

-Canaan Valley is still going with the 22nd as their opening date. That too might be subject to change based on what the webcam looks like.

-Winterplace has changed their opening date from tomorrow until next Saturday, December 24th.

-Wintergreen opens tomorrow and will be skiing and riding on 5 trails serviced by 2 lifts. I really want to check them out this year.

-Bryce hasn’t updated their slope report or anything this morning, but they are supposed to be open. The webcam is showing some groomer activity so I’m assuming they will be skiing and riding today.  The lifts have just started running too so that must mean they are open for business.

Wisp is still scheduled open for the season tomorrow. That’s all the info I have for them right now so that might be subject to change.

Ober has been making snow whenever possible but it’s always a little warmer over there. No word yet on an opening date but stay tuned for more info.

As always, check out the ski report page for more detailed info and conditions.

That’s all for the week from me.  Mike will be doing the morning update over the weekend, so check back in with him tomorrow and Sunday.