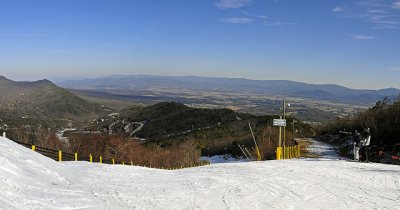 Mornings like this make it REALLY hard for me to stay positive. It is gross outside right now and will remain that way throughout the day unfortunately. Quite frankly, the only way to describe what today will be is…washout. Ugh.

It’ll be interesting to see how the slopes will look come tomorrow morning. A few areas, mainly here in NC, were starting to show some brown spots yesterday on the web cams. Because of that, I was a little hesitant to go riding last night. I actually went home after work and took a little catnap, woke up and was seriously contemplating just going to the gym. I took a quick look at the App LIVE cam, saw some fun looking park features, and then decided to sack up and head out there with my co-worker. I’m glad I did because it was really fun. It definitely felt like a late season session though.

They have plenty of snow and great coverage, but the snow was REALLY slushy. I was wearing only my Under Armour and a t-shirt…and I was hot. The park setup itself was pretty great. I finally got to hit a jump this season and there were plenty of boxes and rails for both beginners and experts. It’s always intimidating to go out there though because I’m not that great at park riding and I’ll see a bunch of kids doing some crazy stuff.

In general, yesterday looked to be a pretty fun day to ski and ride at every resort across the region, not just here in NC.  Bluebird, spring-like conditions existed up in West Virginia and Virginia as well as evident from this picture taken at Massanutten. 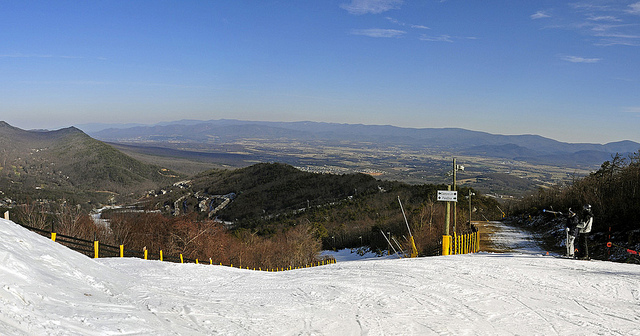 <<< Bluebird skies and soft snow yesterday made for spring like conditions at Massanutten.  Looks fun!

So, after being out at App last night and seeing how well they are holding up, I was pretty surprised to come in this morning and see that App is closed for the day due to the weather. Honestly, I don’t blame them whatsoever as it is probably for the best. I highly doubt anyone wants to be out on the slopes today anyways. I wouldn’t be surprised to see another resort or two do the same thing here shortly.

EDIT: Wolf just posted on their site that they will be closed today as well. 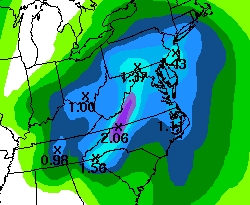 <<< It pains me to show you this, but here it is anyways.  This is the HPC underdeveloped snow forecast for today.  Purple is not good!

Like I said already, it’ll be really interesting to see what the web cams look like tomorrow morning. I don’t think the ski areas up into West Virginia and Maryland will be hurting too bad at all. From what I’ve seen, the trails that are open at those areas have great coverage and plenty of base. The weather this year so far has definitely been kinder to those guys. 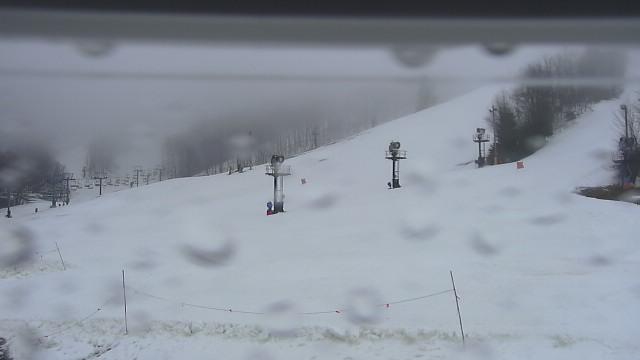 The Winterplace cam is showing a few raindrops this morning, but as you can see they have GREAT coverage and a ton of snow.  The ski areas up into West Virginia and Maryland are definitely going to fare better with this weather today. >>>>>>

I am worried though a little bit about the resorts in Virginia and here in North Carolina. Those ski areas will definitely be seeing some bare spots by tomorrow morning.

The good news though is that there is light at the end of the tunnel. As I’ve been talking about all week, Thursday night through Sunday is looking pretty fantastic. It will be a complete 180 from today. Beginning Thursday night, much colder temperatures will invade the region. Some natural snow is in the forecast for West Virginia and portions of North Carolina as well. Around the clock snowmaking is a good bet for many ski areas. It’s going to be pretty crazy how much different things will be for the weekend. The roller coaster continues!

<<< The forecast for Snowshoe looks pretty good for Thursday through Saturday night!

Not much has changed in terms of open terrain across the region so head over to the ski report page if you want to see all the details dealing with that. On a side note, can anyone explain to me how you can have both wet and frozen granular as your primary surface?  Isn’t that an oxymoron?

That’s it for today. Stay positive people and think cold! Talk to you tomorrow.