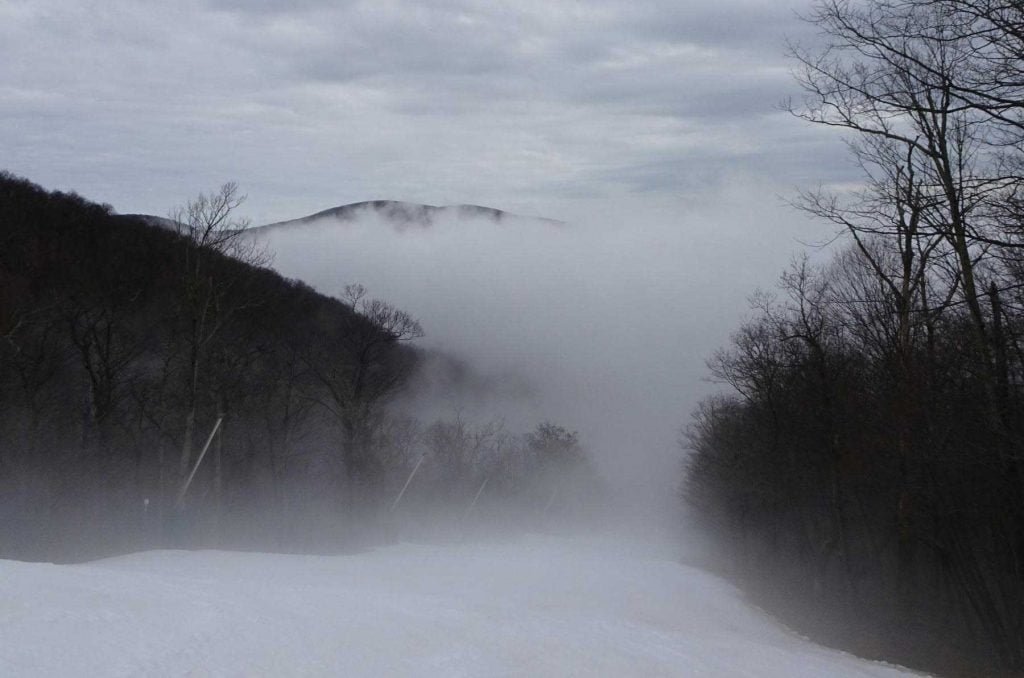 Mother Nature is giving us a full on spring preview today and this week in general.  Temperatures are mild, the snow is soft (and fading), and the morale of skiers and snowboarders is sinking.  I even saw one ski area already promoting golf on their Facebook page.  There is some hope though.  We just have to look towards the second half of next week…

It’s another very mild morning as all of the open ski areas are mainly in the 50’s this AM.  I say open because we have a handful of resorts who are closed.  As I talked about yesterday, Ober Gatlinburg and Sapphire Valley are done for the season.  Ober will still have tubing open through April 1st, but skiing and snowboarding has concluded until next season out there.

Temporary closings include Wolf Ridge, Timberline, and The Omni Homestead.  I mentioned yesterday morning how Wolf Ridge was thinking of re-opening on Friday if the weather cooperated.  They’ve pushed back the possible re-opening to Friday evening or Saturday now.  I still have my doubts if we’re being honest.

Timberline is also closed today through Thursday.  They plan to open back up on Friday and I am far more optimistic about that happening as the webcam shows a lot more snow on the ground up there.  Finally, for now, The Omni Homestead announced yesterday that they are going to stay closed through Thursday with a Friday re-opening.  Tubing is over for the season but they will have mini-snowmobiles and ice skating this weekend.

All of the above mentioned re-openings are weather dependent of course.  We could very well see some more announcements in the coming days.  I would just keep checking back here daily as we’ll make sure to post any information we get.

While this week in general pretty much stinks, there is some light at the end of the tunnel.  It’s kind of a ways out, but it’s there.  Here’s Brad Panovich to explain it all.

I think that is the third video forecast in a row where he’s started out by saying he wish he had better news for us.  Ha.  The dreaded blowtorch is here.  We’ve done well so far this winter to avoid it, but it’s inevitable that we’ll see it at least once every season.  Warm temps with showers later in the week will continue the sub-par February.

Let’s cross our fingers and hope that some of the resorts can hold on until next week when that pattern change arrives.  A few ski areas look much better than others and should be able to weather this warm stretch easily.  The webcams are showing progressively deteriorating conditions at many other areas though.  There is some dirty snow visible at just about every resort right now.

If it seems like I’m in a down mood, it’s because I am.  I love snow and snowboarding.  That said, there’s still some fun to be had if you want to get some skiing or riding in.  Now that we’re into late February, the crowds are lighter which means hardly any lift lines.  The snow is super soft right now and falling doesn’t hurt as much.  You can ski or snowboard in minimal layers due to the warm weather.  I love cold and snowy conditions but it’s also nice to ride in a flannel or long sleeve t-shirt.

And if that pattern change does occur, you never know what March could bring.  Three or four years ago we had a mega March dump where it snowed multiple feet at some of the resorts.  Some of my buddies had a 30+ inch day at Wintergreen in March.  It usually always snows at least on one occasion during the month.  When I used to semi-live up in Boone, some of my favorite times of the season were night riding after work.  Once we go back to daylight savings time the sunsets are just awesome if you can sneak in a night session.

Look at the calendar and you’ll see we literally have one month and one day left of winter.  A lot can happen.  We just need to get through this week first!

If you have some more free time today after reading this, make sure to check out David McCue’s latest article.  He takes a look at Wintergreen Resort as he went on two separate occasions this winter.  I have been saying for four or five years now had I need to get up there and I still haven’t.  Shame on me.