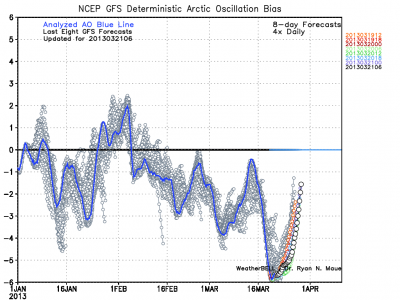 The second day of spring has brought us weather more reminiscent of January or February!  It is freezing outside, literally.  It's crazy to look at the forecast and realize that most of the remaining open resorts won't hit the 32 degree mark.  Heck,  most of them won't even get out of the teens!  The forecasted high temperature at Snowshoe today is only 10 degrees.  You read that right, 10 degrees…on March 21st nonetheless!

In addition to those cold temps, you'll see on the SNOW REPORT that a few inches of snow fell across the mountains of NC and WV.  It was weird to wake up this morning and see a blanket of white out front of my place after being in 80 degree temps this past weekend.  Such is spring in North Carolina! 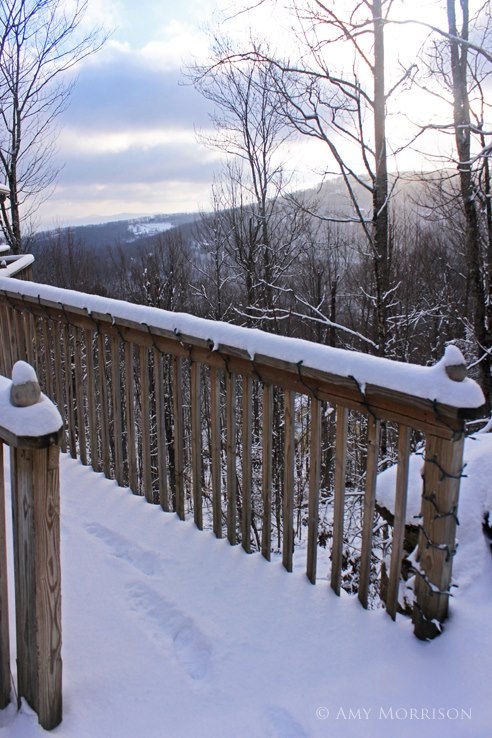 This was what it looked like on Beech Mountain this morning.
Photo credit: Amy Morrison

More snow is expected over the next few days for Snowshoe, Timberline, and Winterplace before another system moves through this weekend and brings more snow for everyone.  Winter just keeps going!  It's crazy.  If I were able to, I'd probably head up to West Virginia next week.  It's looking like they are going to have some sweet conditions and the snow will keep coming down.  I'm really, really curious to see if any of them try to extend their season into the first week of April.  Hmmmm…..

If you're wondering why we're seeing such cold temperatures this late in the season, check out the two images below.  One shows the North Atlantic Oscillation (NAO)and the other shows the Arctic Oscillation (AO). 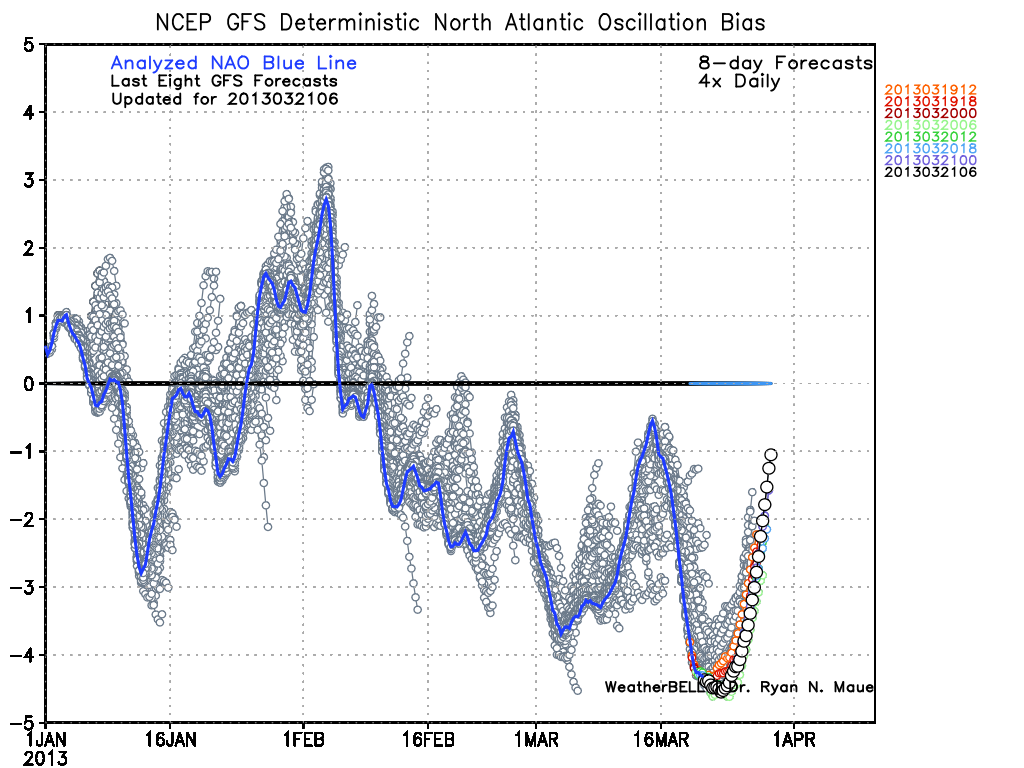 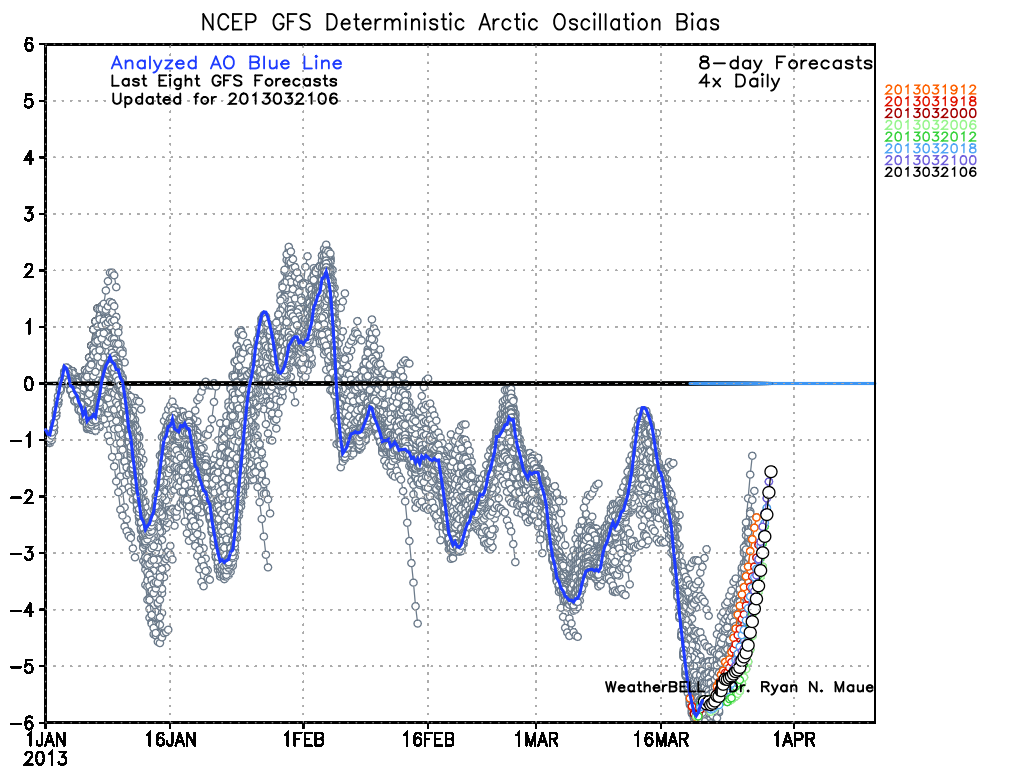 There's a pretty high correlation between them being negative and cold temps in the eastern US.  As you can see, they are in the tank right now!  What's that mean?  There's currently a huge dome of high pressure over Greenland that is causing the jet stream to buckle.  Arctic air is being funneled down to our neck of the woods, hence why it's so cold.  This pattern is forecasted to switch sometime around the end of the month, but in general the rest of March looks unseasonably chilly.  /weather nerd chat.

It really is a bummer that a lot of places are closing up soon when conditions are still so good.  I talked about this the other day and even posted some photos of closed resorts and pointed out how much snow they still had.  Well, one of those ski areas has decided to prolong their season by another week.  The Homestead announced on Tuesday that they will push back their closing date to next Saturday, March 30th.  They are closed right now but will re-open this Saturday.  Kudos to them for allowing folks to take advantage of the snow!  Check out the video below they posted.

There's a lot of end of season stuff going on this weekend, so I figured I'd  highlight a few of them.  First up, Appalachian Ski Mountain is hosting their annual Meltdown Games event this weekend.

Winter isn’t over until we say it is. Come enjoy Appalachian’s classic end of the winter celebration on Saturday, March 23 & Sunday, March 24, 2013. A full weekend of crazy events you won’t see any other time of the year, with lots of snow, sun, and skin.

All events are free with your ski ticket. Take your best shot at tons of prize categories. Thanks to all the event sponsors who made these games possible: Burton, Salomon, Line, Bula, Hot Chilly’s, Zan Headwear, Optic Nerve, Obermeyer, Screamer, Celtek, Spy, Dragon, Smith, Grenade, and 686.

Wintergreen will be closing up shop on Sunday as well.  Their Slide & Slash Bash Weekend takes place Saturday and Sunday.

It's a party all weekend to say goodbye to another great snowsports season at Wintergreen. We'll expand the terrain park to include all of Dobie. Don't miss the pond skimming! The Park Party is on Saturday and Pond Skimming on Sunday, so plan to stay for the weekend. Costumes are required to enter the Pond Skimming.

Bryce Resort and Beech are also closing this weekend.  I'm not sure what Bryce is doing but Beech is closing on Saturday and will have “games, music, and other activities”.  I'll be out there on Saturday so if you see me, say hey!  I might have a Deadmau5 head on.  We'll see haha.

That's it for me this week.  Get out and enjoy the second to last weekend of skiing and snowboarding if you can!