SOUTHEAST SI WILL PROVIDE HIS FORECAST HERE THIS MORNING 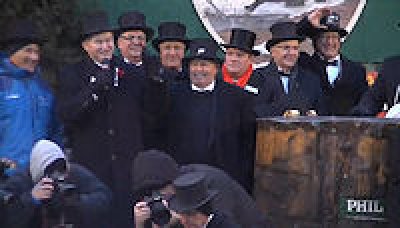 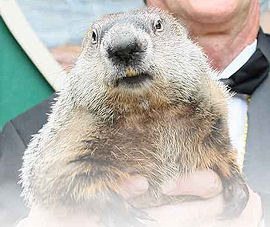 Punxsutawney Phil was just dragged out of his burrow (against his will I might add) and DID NOT SEE HIS SHADOW and has forecasted an early Spring!

Here at SkiSoutheast.com we say – "NOT SO FAST MY FURRY FRIEND" – as we have just received a bulletin from our news desk that says that my dog Dakota (which is part Wolf) has cornered a groundhog in the dense forests of Sleepy Hollow and we will be "ascertaining" a forecast of our own in just a bit.

You WILL NOT want to miss this one! So check back sometime around mid-morning!

FOR NOW THOUGH…here is what that traitor to all things ski and snowboarding from up in PA has forecasted:

On this February 2nd, 2013,
the One Hundred and Twenty Seventh Annual Trek of the
Punxsutawney Groundhog Club at Gobbler’s Knob….

Punxsutawney Phil, the King of the Groundhogs,
Seer of Seers, Prognosticator of Prognosticators,
Weather Prophet without Peer,
was awakened from his borrow at 7:28 am
with a tap of the President’s cane.

Phil and President Deeley conversed in Groundhogese
and Phil directed him to the chosen Prognostication scroll.

The President tapped the chosen scroll and
directed Phil’s Prediction be proclaimed:

My new Knob entrance is a sight to behold
Like my faithful followers, strong and bold

And so ye faithful,
there is no shadow to see
An early Spring for you and me.