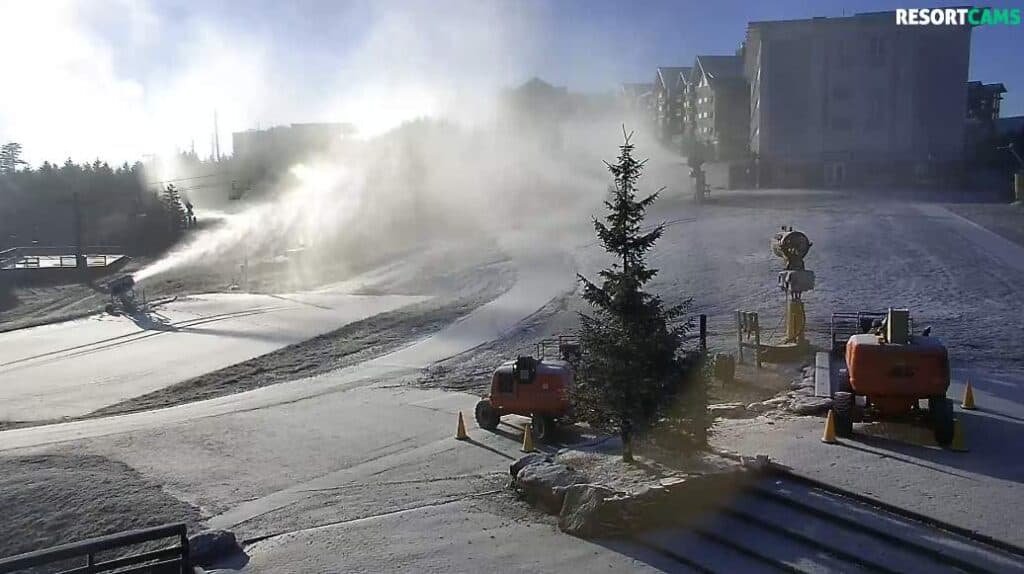 I was taking my normal, Mach-one march through the social media page when I hit the brakes to make sure what I quickly read was what I thought I was reading.  The post was one of those with those colorful backgrounds that Mark Z. lets you use to draw attention to your thoughts.  Basically, it read (and I am paraphrasing) that the first flurries of the season were spotted at Snowshoe Mountain.

I am here to say that during this pandemic my smiles have not as been as frequent as in the past (that old man worrying thing about what lies ahead tomorrow) but to know that someone was seeing snow in the region brought the corners of my mouth pointed up immediately.  If you read last week’s column, you know I have a lot of questions as we get ready to start the 2020-2021 ski and snowboard season.  However, one question I very seldom have is if it is going to snow in the Allegheny Mountains.  Well, that social media post put that question to rest for this season at least.

Nor was I the only person happy to hear about snowflakes falling at 4848 feet in West Virginia, just about every weatherman in the region made mention of it in their evening weather forecast.  Now don’t put those skis and snowboards on top of your car just yet and head for the slopes, we are only talking about flurries, not that dump every skier and snowboarder dreams about, when they are thinking about making those first turns of the season.  On that thought, did you see out west received over a foot of snow in snow areas and yes, the first turns of the season took place at a couple of resorts.

Let’s get back to this region and what those first snowflakes meant for the overall situation at one resort.  What I am referring to is with the snowflakes came freezing temperatures (duh, you say) and with those cold conditions came snowmaking.  Yes, that sound you heard, that beautiful sound you heard was the sound of water rushing through snowmaking houses and the whistling of snow being made as the manmade crystals hit the ground.  There was a bunch of sharing of webcam video of the snowmaking, courtesy of skisoutheast.com from the top of Snowshoe Mountain.  Again, we are not talking about laying down enough snow to make turns, but enough to make sure that people know that the 2020-2021 season is going to commence soon, lord willing of course.

When I had an office at Snowshoe Mountain, I was always pushing mountain operations to get the guns going as soon as possible.  Again, not to get the slopes open necessarily but to make sure that everyone knew that colder temperatures were here, and the season was going to start right around the corner.  I have told Mike Doble many a time and it doesn’t matter if the resort is in Tennessee, Virginia, North Carolina, Maryland or West Virginia, when skiers and snowboarders learn that the sound of snowguns can be heard in the higher elevations, the anticipation level climbs rapidly.  In other words, it’s about the snow stupid and now much more.  I wish by turning on the guns it would help finding a COVID-19 vaccine, but you and I both know that isn’t the case, however if there is snow, there will soon be skiing and snowboarding available for everyone who has been not venturing very far from home since March.

If you wonder what the first snowflakes and snowmaking means to the industry, just read on some more.  I contacted a couple of ski shops in the region to see if they had heard of what was happening in the mountains.  I was quickly told, with lots of enthusiasm, that their phones starting ringing and rental inquiries started coming in on their website.  That proves my above point that it is about the snow stupid and, if and when it occurs, skiers and snowboarders immediately react.  I have always known this to be true, but more than ever right now, it is refreshing that at least one thing remains normal during this crazy time.

What this all means is that it is time to get those skis and snowboards out of that garage corner, dust them off and get them to your favorite ski shop to get tuned.  I have a feeling that things are going to bust loose and we will be making those first turns of the season.

I have talked about the P.U.D. (pent up demand) factor quite often and by the way the phones were ringing and the internet was humming last week with the first flurries sighting, I think I am not the only one ready to strap on the board or boards for you two plankers.  It’s about that time.

Another thing that points to skiers and snowboarders being eager for the upcoming season, is the amount of season passes being sold this year in the region.  Word out there is that most resorts have seen an increase in season pass sales.  I think some of that may be because of possible capacity management issues at resorts, but I think some of it is also skiers and snowboarders just want to get outside more this year than in years past and I am right there with everyone.

That’s it for this week, thanks for joining me for my weekly thought process. Just remember whether it be cold or whether it be warm, we’ll weather the weather, whatever the weather will be.  I still believe this season is going to be a bit of a challenge, but as I have been saying lately, just put the plow blade down and keep pushing.