Some of us will take our snow ANYTIME and ANY WAY we can get it.

I received a couple of emails – literally only a couple – from people off the mountain who were actually commenting on the Trip Reports that were posted on the messageboard late on Saturday. Why even bother responding to these kinds of emails, you ask? Because the truth is I hear this kind of thing every season. Some simply like "raining on someone else’s parade" by making comments like, "I prefer to wait until all trails are open" or "XYZ Resort does it "right" – they wait until more terrain is open for a better product before opening".

One grumpy jerk – I mean reader wrote, "You guys call that enough snow to open for the season? Here around Vermont we’d be closing up with the kind of mud I saw in the photos on your forums from today!" – Jeremy (the coward didn’t tell me his last name)

Tom Gentry wrote – "I’m kind of surprised that Sugar would open with the kind of conditions I saw in the photos over on the boards (messageboard). I guess something was better than nothing. For me, I’ll wait to drive up from Walteboro, SC when there’s more snow on the slopes."

To the first dude, I’ll say – I really don’t think you’re "around Vermont" because if you were you’d know that Killington is operating today and they only have 5 trails open and a base that is showing bare areas and thin coverage. The two ski areas open "down here" are in freaking N-O-R-T-H C-A-R-O-L-I-N-A and those that hit those trails on Saturday were grinning from ear to ear enjoying it.

To the second guy I’d say – personally I wouldn’t have driven the 4.5 hours up from one of the hottest places on Planet Earth to play on Sugar’s two trails and Cat’s four. HOWEVER several would and did. That is why Cataloochee and Sugar do what they do. Year after year they crank up the snowguns as soon as they see a small window of opportunity and they open as soon as they can to reward their fans with some early snow to ride – if only for a couple of days. You can bet that the fans of those two ski resorts appreciate it enough to reward them with their business in the form of season pass purchases. I personally know several people who have already plunked down the $625 (Cataloochee) and $700 (Sugar) for season passes and I’ll bet many of them were satisfying their early season Joneses on Saturday.

I was playing tennis this past week on a 60° afternoon up on Seven Devils. By the time we were finishing up it had dipped down to around 52° and when combined with my sweat-soaked shirt – it was pretty cold. I thought to myself that we probably don’t have but another day or two of "tennis season" left to play this year. However, around April of next year, when the cold-winter winds are being warmed to around the upper 40’s I will hit the tennis courts again and praise the mild temps and how great it will feel to be on the courts again.

The temperatures are the same. The difference is my perspective on things. 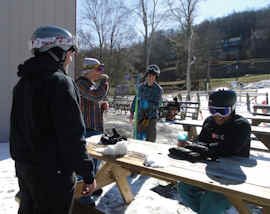 <Photo from yesterday at Sugar with TheKenDog and others.

THAT’S the way it is for snow-loving skiers and snowboarders. A couple of my crew have already been walking around the office with their ski boots and new snowboarding boots on. Several of our circle of friends have already been begging for snow and winter to get here – back in late JULY! For those people, that snow that is on the slopes at Cataloochee and Sugar Mountain today is PLENTY enough to sustain their appetites for a few days.

Sure, we all want pristine, sugar-powder snow everytime we hit the slopes. It doesn’t happen that way for most of us. Unless you’re Shaun White and can jet around the world in search of the "snow of the day" – most of us mere mortals will take our snow just about any way we can get it – WHEN we can get it.

It is for THAT reason that the ski resorts that open early do so. I’ll bet you that Gunther and Kim Jochl tested some of the merchandise yesterday. I KNOW that Len Bauer did. I’m betting Dakota and some friends did. I’m hoping that Chris Bates of Cataloochee did. These guys and gals at Cataloochee and Sugar are snow freaks themselves. You people should’ve heard the voice mail message on my phone last Thursday from Tammy Brown of Cat. She was vibrating she was so excited about the fact that the snowguns were blasting away.

Year after year I hear from fans of all the ski areas of our region about how their resort waits until it can provide THE BEST product possible – with as much terrain open as possible – before opening. That’s fine. It’s admirable. It’s also USUALLY about money. Most of us would throw up if we had to pay the power bills at the ski areas. If most of us were in charge of those finances, we’d wait until we saw a THREE WEEK WINDOW of frigid temps before we’d take the chance to make snow and open. Most of the ski resorts of the region don’t open until early December for that reason (and others). That’s totally understandable because the ski resort management peeps know that only a small FRACTION of their annual revenue is generated with the "prior to Christmas" skiers and snowboarders anyway.

So if you’re a fan of some of the ski areas that won’t open until December – even when there’s a foot of snow on the ground – great. We are too! However, don’t be trashing on the ski areas that JUST HAVE TO GET OPEN by Halloween if at all possible.

It’s all in your perspective and personally we’re all ready for some skiing and snowboarding at ALL of the ski areas of the region.