Tourism related businesses have long been able to kind of operate in the blind with no great concern over public perception. Twenty years ago, unless things got way out of hand, as a business owner you could pretty much play ball the way you wanted and there wasn't a lot that the consumer could do to share their bad experiences.

Fast forward to the world that we live in today and websites like Trip Advisor and Travelocity will trash talk you in a heartbeat.

As ski areas have begun to "wake up" for the season and make snow, we've begun to receive quite a few phone calls (our number is all over the new website) and emails from those of you wanting to know when this or that ski area will be open and why this or that ski resort hasn't made snow, etc, etc.

NOT READY TO RAKE ANYONE OVER THE COALS…JUST YET…

It's early in the season, and last season was just the pits weatherwise so yours truly isn't ready to start a war of words with any ski area, and since the purpose of this story is NOT to give any ski area a hard time…I will be redacting these recently posted comments. The point of this story is to share the fact that YOU GUYS, our readers have the power these days. No longer can ANY business really – but in this case our ski areas – ignore your complaints because you have a place to share your frustrations such that they cannot be ignored. It's called the internet.

This will be our 17th season sharing "NO BULL REPORTING" of what's happening across the Southeast and Mid Atlantic and it always tickles me to get comments from viewers who write things like, "This internet things makes getting the word out pretty great, huh?"

We'll say it does!

I was speaking with one of the ski resort owners on Wednesday and was reminded that nearly six years ago I wrote a piece that was accurate, but not so nice about one of our ski areas. There was a quick kick-back and some hurt feelings, but if we fast-foward to the way things are now MY STORY was akin to a bedtime story compared to some of the scathing comments that YOU PEOPLE share via websites like Trip Advisor or Travelocity!

Over the last few days as more of the ski areas have begun to make snow, I've received emails like these:

"Can you guys tell me any good news about when REDACTED NAME will be making snow. Hell even Sapphire Valley beat us to the punch this season."

I was clicking around the net looking for anything "new" out there about REDACTED NAME from ANY news source and after only a couple of clicks I was reading some expressed frustrations over the fact that REDACTED NAME had yet to make snow. I clicked around and lo and behold REDACTED NAME'S own Facebook page is allowing those who have "friended" them to post some not-so-friendly comments.

For example, when REDACTED NAME posted that they had not yet been able to make snow, Michael Schuit posted, "It's always something…humidity, temperature inversion, el niño, too windy, Santa flew too close to slopes…maybe call up sugar and ask them how to run those guns!"

Tyler Brank posted, "I agree, how is it that sugar is already open to the top and you haven't even changed your snow report since last season! What's the problem up there?"

Ouch! Knowing the owner, REDACTED NAME over the years I'm pretty certain that he has no clue that these kinds of comments are floating around out there much less ON THEIR OWN Facebook page.

TripAdvisor isn't showing them any love either!

That got me to looking at how some of the other ski areas would stack up via these kinds of sites and this is what I found. 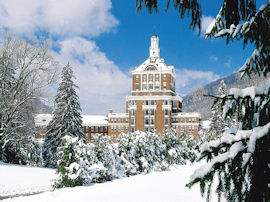 In terms of which resort was MOST TALKED ABOUT hands down that ski area is THE HOMESTEAD RESORT in Virginia with 746 posted reviews on TripAdvisor.  They are ALSO one of the highest rated resorts with 83% of their reviews grading the resort from Average to Excellent. (Most were VERY GOOD and EXCELLENT.)

Wintergreen Resort – also in Virginia was the HIGHEST RATED RESORT with a whopping 96% approval rate with only 4% grading Wintergreen as "poor to terrible".

Wisp Resort in Maryland had the second highest approval rating with 90% of their reviews being nice.

WHAT DOES THIS MEAN???

I'm really not all that bright so I won't venture any kind of expert opinion except to say this. Every ski resort should pay attention to what these kinds of social media sharing websites are saying because it shows a lot of room for improvement across the board. When you consider that the AVERAGE rating for ALL (16) of our winter resorts is a grade of 80%, that means that 20% of you guys who are visiting the ski resorts of our region are giving us a "poor to terrible" score!

If two million skiers and snowboarders visit our region this winter – based on these results from Trip Advisor, then 400,000 of you are going to be unhappy.

My first reaction to the complilation of these results was, "Well, it's probably true that MOST of the people who are going to take the time to post a review on TripAdvisor are going to be motivated MORE out of anger than joy. So maybe the results that you find on the internet are skewed."

I randomly (off the top of my head) searched reviews on several other attractions and lodging, etc in the area and found these results:

So it's not exactly true to assume that most of the people posting reviews have a bone to pick with the attraction or business that they are reviewing.

I'm certain that some kind of behavioral or statistical expert could or perhaps would shoot holes in this simple BLOG, however I think that there is something to be said to support the idea that resort management and marketing teams should be paying attention to what social media viewers are saying about them and either work to improve the overall customer experience OR work to pay a firm to get rid of the negative commentaries!

IN CLOSING AND FOR YOUR PERUSAL…

In my seventeen seasons of reporting on and writing about the ski industry in our region – I have received all kinds of "negative comments" about this or that ski area and I'm certain that the resorts get them as well. An occasional negative is almost expected and to be honest we all kind of "look the other way" when these come in. When more than a few come in about one resort we tend to look at it with the idea of "where there's smoke there's fire".

Looking at the number of reviews and approval percentages I think that I was even a bit surprised myself to see some of the results and which resorts were most or least talked about, etc.

Based on the customer reviews and the number of them, we'd say that a trip to THE HOMESTEAD is in our future!

In the case of TripAdvisor's ratings…we'll just report the TOP TEN RESORTS as it isn't our desire to give those not ranked in the top ten any kind of negative press. Again, that isn't the intention of this story. What IS the intention of this story is to share the fact that all of us in business should be much more mindful of what is being said about us on the internet.

Again will only post the TOP TEN and you can search for the rest and come to whatever decision you wish. If I were the resorts, I'd have a look at these and other social media sources such as Facebook and others and dedicate an effort to communicate with viewers to minimize the negative reviews.

You can email me your thoughts and reactions at: [email protected]

That's it for me today my friends. If you're reading this, do me a favor if you would. If you're on Facebook or Twitter – would you do us a favor and share our Facebook and Twitter content pages with your snow loving friends. We're going to be doing some sweet contests this season along with the 25 days of Christmas giveaway where we will be giving away lift passes every day of the month through Christmas Day. We'll have some vacations to give away as well so to get the BEST chances to win, follow us on Twitter at www.Twitter.com/Skisoutheast

If you'll tweet your friends to follow us we can build up a great following to join us for our Summits this season. We'll be announcing those dates and locations this week as well.