Social and Interactive Media Keeps Us ALL Honest! 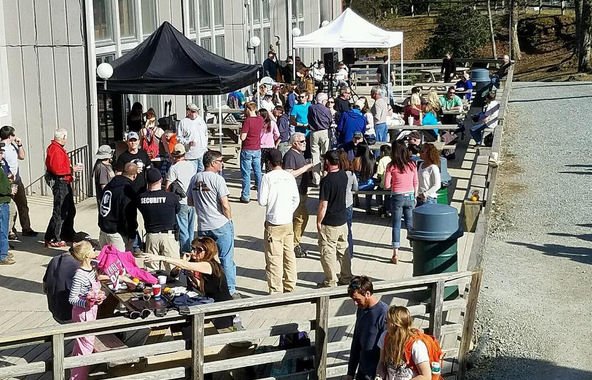 Good morning all. At this date during a typical ski season we’d still see a fair number of resorts plugging along. Among them would ALWAYS be Sugar Mountain and Cataloochee. Most often Winterplace would still be open. Chances are Massanutten would be. Sometimes, Wintergreen.

Of course THIS has NOT been a typical winter. Sugar Mountain has been the last ski area to close (often with Cataloochee ‘competing’ for that marketing honor) more seasons than not over the last several years. Not so this season as Sugar Mountain pulled the plug on their season at 4:30pm on Wednesday, March 24th. We’ll have to go back and look at the archives, but I would (almost) bet money that’s the earliest closing date in over ten seasons…maybe longer. 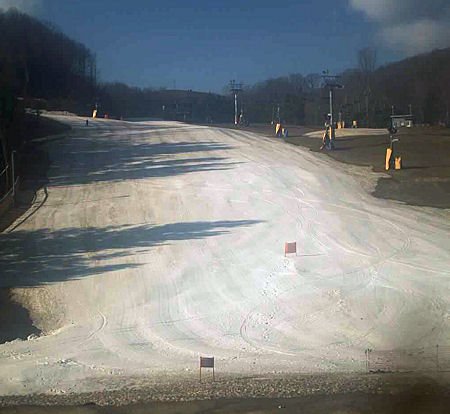 Cataloochee Ski Area is on ‘life support’ holding on with only THREE slopes open (Lower Omigosh, Rabbit Hill and Easy Way) giving Cat about 1200′ or less than a quarter of a mile of terrain to ride from the mid-station down. Cataloochee will close after Saturday’s day session.

Snowshoe Mountain still has 170 acres of terrain open and 39 of 60 slopes and trails which is damned impressive. They are ALSO open for night skiing on the Silvercreek side of the mountain. We’ve received more than a few emails from readers who are both thankful and impressed with that. 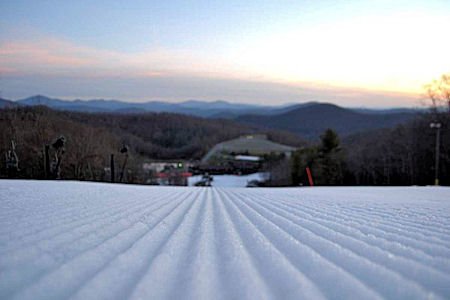 Appalachian Ski Mountain is down to 9 of 12 slopes and trails despite the fact that their website reports 11 open. They posted an awesome photo of some fresh corduroy on Wednesday JUST to show off a little bit about how well their mountain is holding up. It r-e-a-l-l-y looks pretty good doesn’t it?

I’m not certain what’s been going on over at App since about mid-season but their slope report has been more inaccurate than in recent years, often reporting manmade snow as natural snow; not changing their base for several days when most resorts’ numbers were plummeting; and not reporting an accurate number of slopes open. Trust me when I share this fact that it ISN’T something that is being done for nefarious reasons. The people at App are all first-class peeps. I know that often (at least in the past) this has been handled by someone on the night shift, but whoever IS on that job this season has really been asleep at the wheel.

Susan and LeeAnn will attest that I’ve called more often than most seasons to verify reports that we’re getting from YOU GUYS.

…and THAT takes me to the title of this particular FirsTrax Morning Blog.

Rarely does a day pass that I don’t receive multiple emails from our readers. Perhaps I should share more of them. But if it snows and a ski area reports 7″ of new snow, within hours I will usually get an email or two from FANS at that resort who will email me IF that number isn’t accurate. To be honest, many times THIS season I would get an email supporting that snowfall tally. For example, someone would write, “Hey, I see where XYZ Resort said they got 6″ of snow and I’m here this morning and it really looks more like 7-8″!”

With all of the LIVE webcams, Facebook, Instagram and Twitter accounts – we get a ton of input from you guys that has really made us more aware than ever that we have a ton of avid readers and followers out there.

On Monday I received this email which made us feel pretty darn good,

“Mike, I know the season is about over and it has been the pits. But I wanted to express how much we appreciate the job you and your team have done over the years. I met my wife via this website so in a way your site is responsible for two children. Don’t know if you ever considered that Skinc (SkiSoutheast as well.) is a social media space all its own. Hope you’ll consider posting past the end of the season as we always feel like it just stops kind of cold turkey.” – Daniel Campbell, Kingsport, Tennessee

Of course I emailed Daniel back. We’ve heard from numerous people over the years that they’ve met some of their best friends via the website. That is VERY humbling to say the least.

Over the last few days I have posted some of the remarks from readers about late season conditions at various resorts. Those always go a long way to help us inform all of our readers of what they can expect if they jump in their vehicles and head to the mountains.

I mentioned App’s mid-to-late season slope report faux pas and more often than not, those revelations come from YOU GUYS. For instance, yesterday (Wednesday, March 23rd) at 4:19pm I received this email:

In reference to your report on Appalachian’s open trails, we were there Monday and Tuesday and according to all our snow riders, Hard Core and Thin Slice are not open and were roped off. One of our girls even said one of the two was mostly grass. I couldn’t ride this time due to a recent serious illness, so I can’t personally verify, but I didn’t see anyone come down either slope from my vantage point on the porch and, as I said, everyone in our group said both slopes were roped off and closed. – LC Cloer

LC provided his email address but I don’t where they traveled from.

However after viewing App’s slope report this morning – where it reflected 11 of 12 slopes open, THAT email prompted me to call over to App and LeeAnn verified that only 9 of 12 were open and indeed ‘Hard Core’ and ‘Thin Slice’ were both closed.

More often than not, after we inform ski areas of these errors, they usually change or update their websites pretty quickly. In some cases, not so much. It’s been three hours since I informed App of their error and they’re still reporting 11 slopes open.

So We’re Down to Three…

Cataloochee will play until Saturday afternoon, choosing to close the day before Easter. Snowshoe Mountain will ski and ride all weekend closing after Sunday’s sessions.  Appalachian will host their annual Meltdown Games this weekend – which is ALWAYS a blast. However, App will remain OPEN afterwards until April 2nd for some crazy reason.

The forecast looks great for Saturday and most of the day on Sunday before some showers enter the picture Sunday night into Monday. The first of NEXT week looks good and those few of you who wish to hit up Cat, App and Snowshoe THIS WEEKEND and then App NEXT WEEK will enjoy those soft turns  that come with Spring skiing and sunshine. Just don’t forget your sunblock!

We’re REALLY starting to wonder of the notorious “Weather Dependent” phrase will enter the picture and effect Appalachian’s intended closing target date of April 2nd. Those guys like to insure that their guests get the best on snow experience and with rain and showers in the forecast from Thursday through Sunday of NEXT WEEK, we’re thinking we COULD see an earlier exit for App. We’ll see I guess.

That’s it for me today.

Previous Post
It’s All About Your Perspective – PART DEUX
Next Post
Appalachian Ski Mountain’s Meltdown Games are This Weekend!