SO YOU THINK YOU ARE A WEATHERMAN 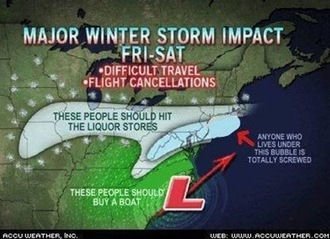 My favorite winter sport is dictated by the weather, something none of us have control over, but boy can we talk about it, here there and everywhere. If it is cold, things are good, if it is warm, well we all know what that means, don’t we? But I have already spent enough space on that issue this season. This column is dedicated to the so-called amateur meteorologists out there that have been creating havoc for folks in the ski industry.

In a galaxy far, far away, during a time when everyone received their weather twice a day, during the 6 and 11 p.m. newscasts, things were basically simple and easy when it came to knowing what was about to happen outside our front door and places we were about to visit. Sounds simple, doesn’t it. Well it was. That my snow loving friends is no longer the case as most of us know.

As the saying now goes, if it is on Facebook, it’s fact, right? That is where the problem gains speed and I am talking about a speed of a Mach One, jet fighter. It seems to me that everyone is a weatherman these days on the internet. Oh the internet, for a couple of dollars anyone can start a website and put out information, fact or fiction, that some people out there in the web universe believe is true and spread the falsehoods with the touch of the enter button. May I take this opportunity to say, that just drives me bonkers. Just ask my wife and son.

Readers of this column have read on a couple of occasions what I think about 10 to 15 day extended forecasts. These forecasts only take in historical data for the most part and really don’t dial in what is actually going to happen until about 48 to 72 hours out of any given day. What this all means it when someone checks a weather site say two-weeks out from a scheduled visit to their favorite resort and see that ugly “rain” emoji on a day or two of their scheduled visit, sweat forms on their palms and foreheads. The same amount of sweat that I experience after eating a bowl of chili that was prepared with nuclear waste. That extended forecast has about as much value as a three-dollar bill. But it is on the internet, so it’s going to be fact, right?

As I scribe this, I can feel my pulse begin to climb and my blood pressure go up. I need a run, I better check the internet for the weather conditions, right? Or should I get up off my lazy wigglies and stick my head out the front door. Now that would be way too easy, wouldn’t it? First hand in your face knowledge that may waiver from what you read on the internet, which is always correct because, yes it is on a website somewhere on the great internet. And yes, it has been shared on Facebook over and over again, even though my firsthand knowledge leads me to believe otherwise, I am now led to believe I am wrong, even though I can feel, taste and touch what I am about to experience on my jaunt in the outdoors.

Last month when the Blizzard of 2016 was about to hit the eastern portion of the United States, the so-called weather geeks out there in internet land were having a field day trying to use information that they have no idea what it really means to let everyone know how much snow was going to fall here, there and everywhere. Even though there were folks out there that get paid to give correct and up to date forecasts, saying don’t try to make heads or tails of the forecast maps if you don’t understand the graphics because that could be very misleading when that is done and then shared on say, Facebook. Because as we all know, if it is on Facebook, it’s got to be true, right? Sometimes I think certain grocery store chains out there have folks on the payroll to put out, the sky is falling information, so that everyone heads to the store and just wipes out every bread, milk and potato chip shelf in the store. Have you noticed that these weather alerts seem to always happen just in time so those same grocery stores can restock those same shelves just in time for the second wave of shoppers to wipe them out again. I have no facts to support my claim, but since I am writing and posting this on the internet, I have to be correct, right? Maybe, maybe not, but it’s something to think about.

At the end of the day, I just wish the folks out there that believe everything they read on the internet would also let what they can see on the world wide web, lead them to make better decisions on what the weather is going to be or what is currently happening. Right here on this website, the daily editors (Mike and Kenny) go out of their way to make sure that what they are reporting has fact behind their words. I know for a fact that phone calls are made when some numbers they are seeing just don’t add up to what they are seeing. Human intel, imagine that, such a unique concept isn’t it? So you ask, what are they seeing that causes them to have questions? Easy answer here folks, resort cams. Yes, those beautiful cameras posted in awesome viewing areas at every resort in the region. This just means instead of just believing what every Tom, Dick and Harry weatherman out there may be saying about what is or could be happening on the slopes, you can see it for yourself. Almost like looking out your front door isn’t it? Amazing but true. I suggest giving it a try some time.

So the next you see something on Facebook about a weather forecast, please and I ask again, please check the source and maybe just maybe not hit the share button as quick as you once did and if you really want to know what the weather is like, either call someone located where you are headed or just step out the front door. You may be amazed at what you will learn, first hand.

Previous Post
6″ of SNOW Has Fallen, With More Coming Down! See Where!
Next Post
The Ridiculous Pass Is Back!