A Snowy Day Ahead for Many Ski Areas! 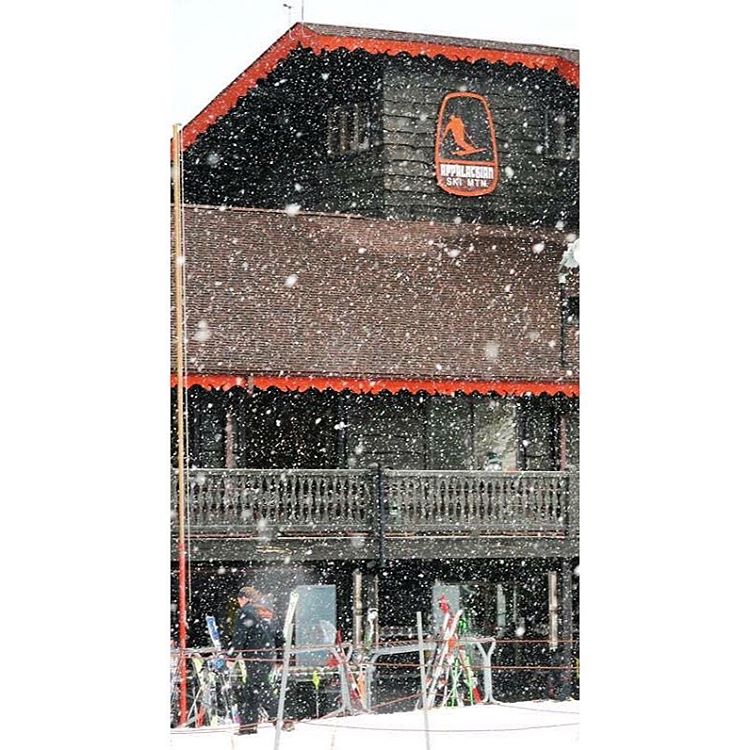 A little bit of rain overnight has given way to snow this morning for ski areas in North Carolina.  Up to 3″ of snow has already fallen at one resort and the flakes will continue to fly today.  Colder air filters in today giving way to widespread snowmaking tonight!

Just as the forecast said it would, rain changed to snow late last night/early this morning at the NC ski areas.  Beech Mountain is reporting 3″ of new snow (I was skeptical about that number until I just saw an Instagram story from up there with a snow covered car) and Sugar Mountain is reporting an inch of new snow.  Wolf Ridge hasn’t seen any appreciable snowfall yet but the snow could be seen on the webcam this morning.

Winterplace in West Virginia is also reporting an inch of new snow this morning.  Canaan and Timberline have seen a trace in the past 24 hours.  Other than those handful of resorts, that’s it for snowfall numbers right now.  The snow will continue to fall during the morning and early afternoon hours for the NC resorts.  Another inch or two max (and that’s pushing it) looks to be possible.  I wish I could show some webcam shots from Beech but the entire mountain is socked in right now and visibility is minimal.  Here’s the view at Sugar.  That inch of snow must be at the top of the mountain. 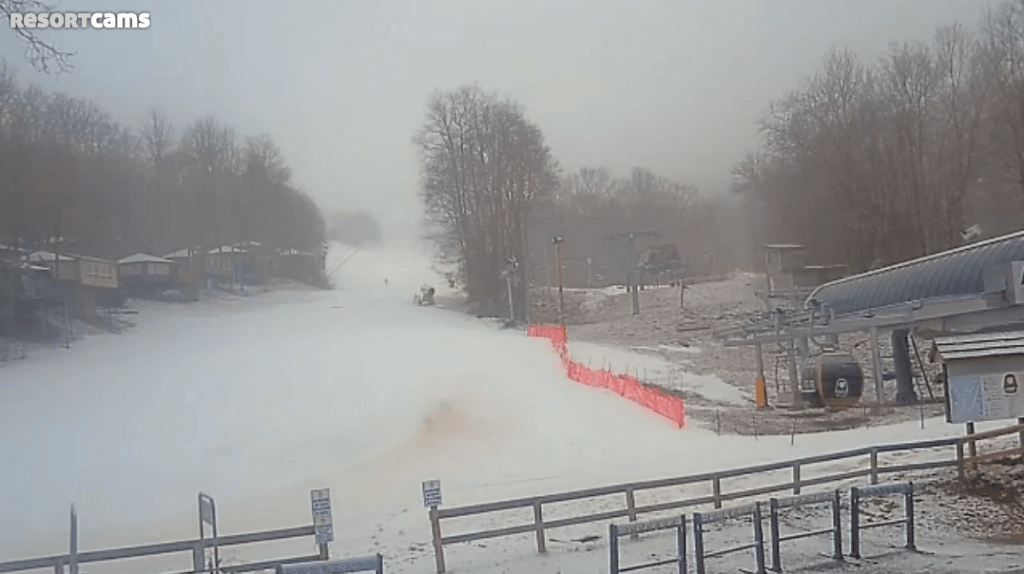 As for the WV resorts, it looks like Canaan, Timberline, and Snowshoe have the possibility of some light snowfall today.  Nothing too exciting.  Once Northwest Flow kicks in though they all should see some more appreciable snow tonight as 1-3″ is in the forecast for all three ski areas.  The same goes for Wisp Resort in Maryland. 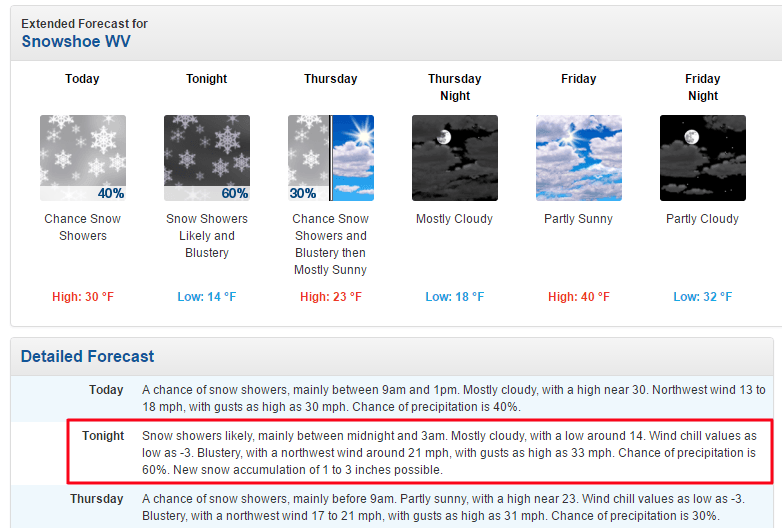 The forecast for Snowshoe.

So totals don’t look like they will be anything crazy, but we all knew this was going to be a small event.  Regardless, it is a nice lead in to the holiday weekend though, especially when you consider the fact that we should see widespread snowmaking the next two nights.  Low temperatures for tonight and tomorrow are in the teens and 20’s for just about every ski area in the region.  Tomorrow night looks a little more iffy for some resorts but everybody should be able to crank out the manmade snow tonight at least.

After tomorrow, the holiday weekend still looks to see milder temperatures, BUT plenty of sunshine.  To be honest, you don’t really want to see temps like this in the forecast but it is going to make for a really nice weekend.  I plan on riding at App Ski Mountain on Monday and am looking forward to riding in minimal outerwear.  I would say it’s going to be a hoody day, but I’m looking at the forecast and it might be a long sleeve t-shirt kind of day.  It’s going to be in the 60’s out there!

Many of the visitors at the resorts this weekend are once a year skiers and snowboarders and may not have the proper gear to deal with extreme cold and snow.  Warmer temperatures combined with sunshine and no snow guns is probably ideal for a busy weekend like this upcoming one.  That said, it looks like those conditions are going to continue into next week which is a bummer.  I’m seriously considering pulling the trigger on a trip to Colorado next weekend.  I need some powder in my life.

That’s it for today.  Sorry for the short post this morning, but I have some work to get to.  Enjoy watching the snow fall today over on Resort Cams.  I know I’ll be checking them out constantly!

Previous Post
Old Man Winter Snarls – It’s Snowing in WV Right Now. Check it Out!
Next Post
A Little Bit More Snow and Lots of Snowmaking as We Head Into President’s Day Weekend