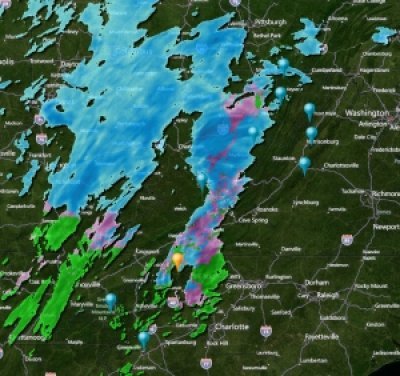 Snowwwwwwwww! That’s what I was thinking when I walked out of my front door this morning and saw that my car had a thin layer of snow on it. It’s not dumping by any means, but it is a welcome sight to see flakes falling from the sky this morning. I just walked outside real quick and it’s continuing to come down here at the Appnet offices in Foscoe. Not a whole lot is sticking though as the temperature is right at the freezing mark. Regardless, it’s definitely a pick me up this morning to see it. 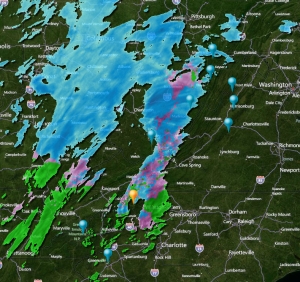 <<< The radar is showing a good bit of snow across the region this morning.  Those blue markers represent the ski areas.

I’d never heard this before, but apparently some Native American tribes refer to full moon that occurs in February as the “Full Snow Moon”. Mike was telling me about it this morning and he wrote a quick little article about it. I am a believer now as we had a full moon last night and then here we are the next morning talking about snowfall. How about that moon last night by the way? It was pretty gorgeous. Check out this gallery of images from last night posted by Brad Panovich.

I know Mike and myself have said it a bunch already this year, but what a difference a year makes! I started this job last year at the beginning of January, and just about each morning for the first several weeks it was crazy how much snow was up here. Getting around town was an adventure most times and I was not used to it. I had driven in snow a bunch of times but I wasn’t used to dealing with it on a daily basis. Fast forward a year later, and I’m all pumped up about seeing a few flakes that aren’t even sticking. What a weird winter!

I know I’m not the only one who is stoked to see the snow flying and colder temperatures arriving again. The people running the ski areas are probably the most relieved of anyone. It’s been a down year to say the least and I’ve been wondering exactly how much money the ski areas are off in terms of revenue. Then, I read THIS ARTICLE yesterday which talks about some financial woes that are currently facing Wintergreen. Basically, it states that Wintergreen experienced a revenue shortfall of 2.5 MILLION dollars just for January and December alone! That is crazy! Hopefully the resort can pull things together and make it through this rough patch. It sounds like they have a pretty good plan in place.

While I’m sure it wasn’t that bad at all of the ski areas, the warmer than normal winter has definitely put a damper on this so far. In fact, the NWS just released info yesterday stating that January 2012 was the 4th warmest on record for the contiguous United States. I say contiguous because Alaska has actually been dealing with one of their worst winters on record. They’ve consistently seen temps of -30 to -50 up there all winter long. Anyways, it was a mild month to say the least. You can read that article by CLICKING HERE.

Back to the current snow…we’re looking at 1-3” today at the ski areas across the region. The northern portion of West Virginia are actually under a winter weather advisory right now. It’s not going to be a significant event, but it’s going to go a long way in improving everyone’s spirits. The next 5 days actually look really good as all of the resorts should be able to make snow each night and some will be able to do so during the day as well. Another system arrives late Friday and even colder air will move in with that one. More snowfall is also expected with it as well so this weekend is shaping up to be one of the best ones of the year. Hopefully this is the beginning of a huge turnaround in terms of conditions. 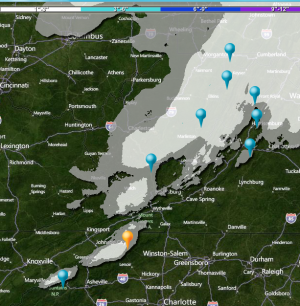 <<< Total accumulations from this system look to be in the 1-3" range.  It’s not a ton but it is welcome nonetheless!

Check back tomorrow and I’ll let you guys know how today went.  Remember, you can head on over to High Country Web Cams to look at the current views at the ski areas and other places around the region today.