Snowshoe Mountain OPENS TODAY at 9am! Cataloochee and Sugar are Open! 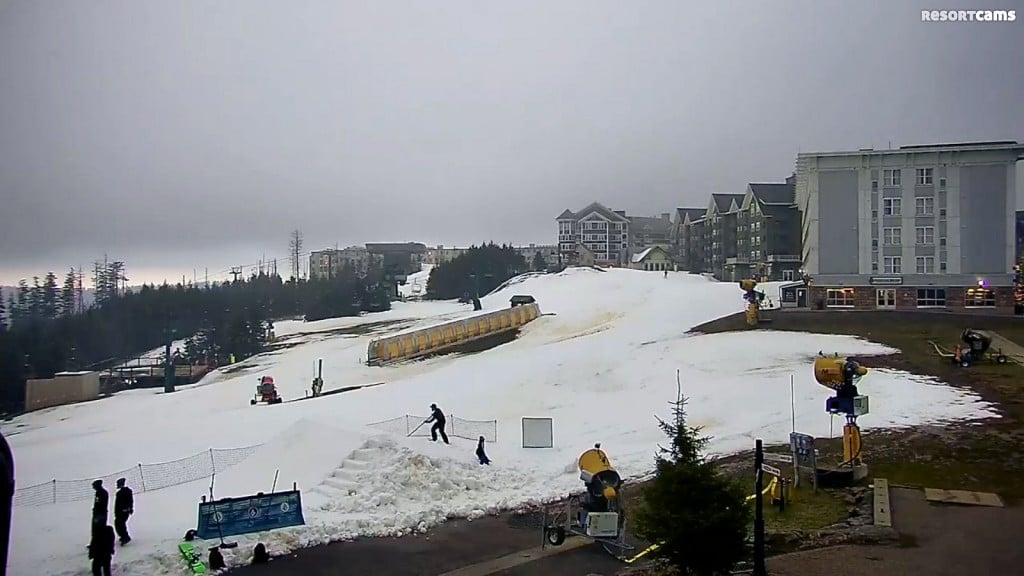 All other ski areas are “Waiting for Cold”.

Let’s get to the good news first. Snowshoe opens today at 9am. They made whales of snow back in November and added a little more over the last week prior to this most recent mild spell. They’ve now pushed that around and are open today for the first time this season.

Photo from two days ago

They posted, “It’s opening day! Ballhooter, Skidder and Powder Monkey Lifts will start spinning and we will OPEN for Skiing & Snowboarding this Friday, December 11th, at 9am.”

Snowshoe also has their Progression Terrain Park open as well as 7 trails, serviced by 4 lifts with a reported base of 26″.

They’ll offer ONE BLUE trail (Tail Tree) and the rest are greens…and they are all groomed. There ARE some thin coverage areas, but they are clearly marked. No night sessions yet as their Silvercreek side of the mountain remains closed.

Cataloochee Ski Area – They’ve dropped one trail to offer FIVE today. They haven’t dropped their base depth in a week – but it HAS dropped. They have some thin areas and bare spots and they are open for day sessions only today.

Sugar Mountain is open for day and night skiing and riding. The slopes have some thin areas and bare spots. Ice Skating is open with sessions at 10am, 12pm, 2pm and 4pm.

The rest are “waiting on cold weather”. I received a couple of emails from readers who are ALSO “waiting on the cold weather” and one posed the question, “Have you ever seen a season where Snowshoe Mountain got opened up before Appalachian or Beech Mountain?”

First of all, to be accurate, Appalachian and Beech have BOTH already had their opening day for the 2015-2016 season – so they HAVE been open. They were forced to close due to the unseasonably warm temps. However, to their point, NO I don’t remember an early December when Snowshoe was open and Appalachian was closed. However it is what it is and right now we have THREE ski areas operating on this Friday, December 11th, 2015 and they are Cataloochee and Sugar in the mountains of North Carolina…and Snowshoe Mountain in West Virginia.

Winterplace Resort in West Virginia pushed their opening date back a week and hope to get open December 19th which is next Saturday.

I’m guessing that they are looking at the same weather forecast that we are and the cold air LOOKS to be filtering into the Ghent, WV area (and Winterplace) on Thursday night and they SHOULD see their coldest air of the season on Friday night as temps look to be dropping into the low 20s. There is also a chance of 1-2″ of snow on both Thursday and Friday nights. Cold temps look to be hanging around for Saturday and Sunday nights according to the 7-10 day forecast.

Snowshoe’s forecast for that same period (December 17th-20th) is for 3-6″ of snow and temps into the teens and even mid-teens for Saturday night (the 19th).

Interestingly, the forecast for Beech Mountain Resort is for a bit more snow around those same dates. We’re still SIX days away – but right now the forecast models seem to indicate some chances of significant snow and lows in the teens and low 20s through that period.

So we COULD be seeing just enough cold air and some natural snow for the ski areas to make snow and get open JUST IN TIME for the Christmas travel week.

HOWEVER, we still have six or seven more days of unseasonably warm temps as we’re expecting to see highs in the upper 50s and even some low to mid 60s over this weekend. The weather pattern looks to be promising more of the same forecast AFTER that December 17-20 burst of colder air and snow as we’re seeing lows in the low to mid 30s through that NEXT week (December 20-25th).

We’ll keep our fingers crossed and hope that the resorts can blast the slopes with enough snow to provide for some good trails to be open for the Christmas-to-New-Year week and then hopefully we’ll see that predicted pattern change move in and get us a typical ski season in mid January and beyond.

I think Wintergreen Resort’s marketing department summed things up nicely for us when they posted,

“Fighting Mother Nature is not an easy thing to do. We started snowmaking last Thursday night, and since then we’ve had inversions every night, robbing us of the low temps we’re looking for and preventing snowmaking.

The good news is that we’re ready. We’ve had the entire SNOWPOWER system running, made our yearly repairs and fine-tuned everything. The system is in great shape, our snowmakers are standing by, and we are itching to turn on the guns.

Rest assured: as soon as temps allow, we will make snow.

For those wanting a prediction on opening day, doing so is impossible at this time. Once snowmaking temps return, predicting an opening day becomes a little easier to do. Thanks for your support and understanding.”

Beech Mountain is being creative. They had hoped to get reopened for today, but Mother Nature saw differently. So Beech is throwing a party! As Talia Freeman of Beech Mountain wrote, “If we can’t ski, we might as well have a beer, or two!”

Unseasonable weather will prevent Beech Mountain Resort from re-opening the slopes this weekend as planned, but the grand opening of the newly-remodeled Beech Tree Bar and Grille will take place this Saturday at 5:00 p.m. and include live music from the Harris Brothers.

As you are probably aware, unusually mild weather has impacted most East Coast ski resorts. Rest assured that as soon as the temperatures drop, Beech Mountain Resort will begin making snow and get the slopes open as quickly as possible. Thanks to upgrades over the summer, our snowmaking capabilities are at an all-time high and we’re poised to create quality conditions as soon as Mother Nature cooperates.

In the meantime, join us for the grand opening of the Beech Tree Bar and Grille. Enjoy live music from the hugely popular Harris Brothers, while enjoying your favorite adult beverages and catching all the games on our many new HD televisions. There is no cover charge for this event and resort visitors do not need a slope ticket.

The Beech Tree Bar and Grille, originally constructed in the late 1960s, recently got a fresh facelift with a new interior remodel. Patrons will notice a ton of improvements, including an upgraded and expanded menu, completely remodeled bathrooms, large projector screen, and the re-opening of the balcony bar.

As an added bonus to our loyal customers, there will be special one-time-only access to the new Red Baron Room. It’s a one-time chance to see this exclusive area and sign up for a membership.
In addition to the Beech Tree festivities, the Beech Mountain Brewing Co. will be open Friday-Sunday, serving noon to 7 p.m daily.  Ski Beech Sports is open this Saturday, from 1 p.m. to 7 p.m., offering 10% off the entire store!

I just wanted to drop a line from a long time member and multiple summit participant that I think this has been your best year yet.  It’s unfortunate about the weather but you guys have really approached the late start with a great chin-up attitude keeping the content rolling.  As you highlighted the other day, Jeffryc/Captain America has the right perspective.  It’s not just a way to approach challenging southeast ski weather, but a great approach to all of the challenges in life.  So, thanks for giving us lots of interesting content to distract from the warm spell.

I was also wondering if the Snow Report daily data is updated statically or if this is stored in a database?  …could do some interesting analysis and data visualization if you have the historical data with dates.  (How long have you guys maintained the daily Snow Report table ?)

Looking forward to the eventual cold and my first day out there and seeing some familiar and new faces.

Thanks to all of you for your dedication to “all things snow” in the southeast and keeping us entertained and informed.

Thanks for that Adrian. I think that our content delivery has kicked up a notch and we appreciate you guys noticing. Per the snow report – we’ve been providing that content for 20 seasons, but the snow report table itself is not archived. However we HAVE archived every single, daily, FirsTrax report for about 15 years and we CAN and HAVE looked back from time to time. If someone wanted to they could literally walk through a history of what each resort was able to offer daily for the last decade or more.

That’s going to “do it” for us today. Keep checking back as we’ll update you with the latest weather and resort news.

Previous Post
Snowmaking Weather Still 7-8 Days Away…but On the Way!?!
Next Post
Weather Outlook for 12/11/15…Looking Towards the End of Next Week