It has finally happened – snow has reached the ground in the Southeast!  Snowshoe has seen the most of the white stuff and has brought their guns to bear full bore.  Take a look at the 3 day time-lapse video and see just how quickly it happened for them.

Our very own Joe Stevens who provided us with the cover photo says, “With the ski season set to begin in a month, Thanksgiving week at Snowshoe, the cold temperatures allowed the snowmakers at Snowshoe to get the snowguns going today as the temperatures dropped below freezing at the higher elevations.  The summit of Snowshoe is 4848 feet. The snowmaking comes on the heels of the season’s first snowfall that began during the day on Wednesday.” 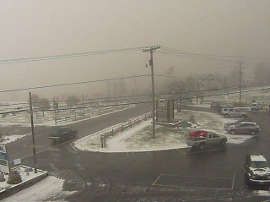 The North Carolina mountains and resorts have not seen the same level of activity but things are definitely starting to pick up.  Beech says they got up to 1 inch and by the looks of the Beech Mountain Parkway, I say they are just about spot on.  And by the way, Beech is hosting the USA Cycling Collegiate Mountain Bike National Championships this weekend (a must see if you’re in the area).  I imagine the weather and snow are going to make for some interesting runs – especially the dual slalom and downhill. 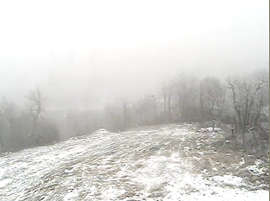 Sugar is claiming that they received 2 inches of snow last night and that they are getting ready to turn on their machines.  With regards to the claim of 2 inches, here are some stills of their base and summit cameras.  Looks like they may have overstated as usual.  I guess it can be hearting to know that from season to 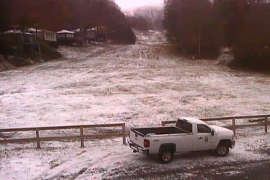 Things should start kicking in big time from here on out.  We’ll keep you guys and gals up to date as things develop and as we hear of firm opening dates.

Wax your bases, sharpen your edges, and hold on to your hat.

Drop me an email at [email protected] to let me know what you think or with suggestions on what we could be doing better.