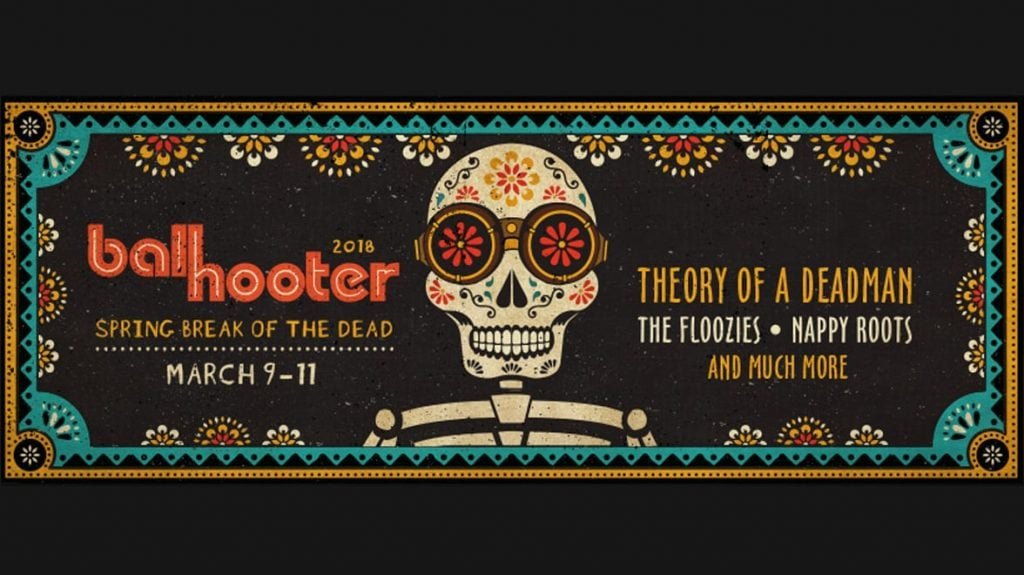 SNOWSHOE, W. Va. – (February 13, 2018) – Snowshoe Mountain has announced the lineup of free village concerts for their 6th Annual Ballhooter Spring Break Festival, March 9-11, 2018. Headlining this year’s “Spring Break of the Dead” will be Theory of a Deadman, a popular Canadian rock band from British Columbia, as well as The Floozies, an electronic duo well known on the festival circuit. Other acts at this year’s Ballhooter Spring Break Festival will include the hip-hop group Nappy Roots, and local favorite Shawn Owen. 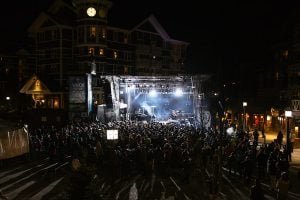 Held during spring break season, the Festival draws thousands of young adults to Snowshoe every March. Spring skiing conditions, free concerts, and a vibrant nightlife scene have made the event popular with students from all over the Southeast, Mid-Atlantic, and Mid-West.

The theme of this year’s Festival is “Spring Break of the Dead” which will include costume contests, live DJ parties, fun games, and the Friday night “March of the Dead” Party Procession in the Snowshoe Village.

Find more information as well as the entire schedule of events for this year’s Ballhooter Spring Break festival here > https://www.snowshoemtn.com/things-to-do/events/ballhooter-springbreak-festival

For more information or to make a Snowshoe lodging reservation, please call 877-441-4386 or visit online at www.snowshoemtn.com.

ABOUT THEORY OF A DEADMAN
Theory of a Deadman is a Canadian rock band from Delta, British Columbia, formed in 2001. The band is currently signed to Roadrunner Records as well as Island Records. The band also includes traits of other music styles, such as country and acoustic, as well as their post-grunge and alternative rock base. So far, they have a total of 5 top 10 hits on the Hot Mainstream Rock Tracks chart, including one #1 hit, “Bad Girlfriend”. They have also released two #1 hits in their native Canada.

ABOUT THE FLOOZIES
The Floozies are producer/guitarist Matt Hill and drummer Mark Hill. These two brothers are bringing their fresh approach to electronic music and live performance to venues and festivals all over the country. The duo’s combination of cutting edge electronic production and party rocking funk energizes crowds and turns venues into epic dance parties. All of The Floozies music can be downloaded for free from www.flooziesduo.com.

ABOUT NAPPY ROOTS
Nappy Roots is an American alternative Southern rap quartet that originated in Bowling Green, Kentucky in 1995, and is best known for their hit singles “Po’ Folks”, “Awnaw”, “Roun’ The Globe” and “Good Day”. They were the best selling hip hop group of 2002. The group consists of Skinny DeVille, Fish Scales, B. Stille and Ron Clutch.

ABOUT SNOWSHOE MOUNTAIN RESORT
Snowshoe Mountain is the perfect winter destination for adventure filled vacations in West Virginia. Snowshoe covers a total area of 11,000 acres in the Appalachian Mountain Range, and includes the second highest point in the state at 4,848’ elevation. With 57 trails and 256 skiable acres, Snowshoe was named to the Top 20 ski resorts in the East by SKI Magazine in 2016. In addition to terrific outdoor winter recreation, Snowshoe offers extensive lodging options, gourmet dining, shopping, wedding and convention areas, and a luxurious spa. Snowshoe Mountain Resort is part of the Alterra Mountain Company.

ABOUT ALTERRA MOUNTAIN COMPANY
Alterra Mountain Company is a community of 12 iconic year-round destinations, including the world’s largest heli-ski operation. The company owns and operates a range of recreation, hospitality, real-estate development, food and beverage and retail businesses. Headquartered in Denver, Colorado with destinations across the continent, we are rooted in the spirit of the mountains and united by a passion for outdoor adventure. Alterra Mountain Company’s family of diverse playgrounds spans five U.S. states and three Canadian provinces: Steamboat and Winter Park Resort in Colorado; Squaw Valley Alpine Meadows, Mammoth Mountain, June Mountain and Big Bear Mountain Resort in California; Stratton in Vermont; Snowshoe in West Virginia; Tremblant in Quebec, Blue Mountain in Ontario; Deer Valley in Utah; and CMH HeliSkiing & Summer Adventures in British Columbia. We honor each destination’s unique character and authenticity and celebrate the legendary adventures and enduring memories they bring to everyone. For more information on Alterra Mountain Company, visit www.alterramtnco.com.

Previous Post
Not Much, But Some Snowmaking This Morning
Next Post
Warm and Wet for the Next Few Days