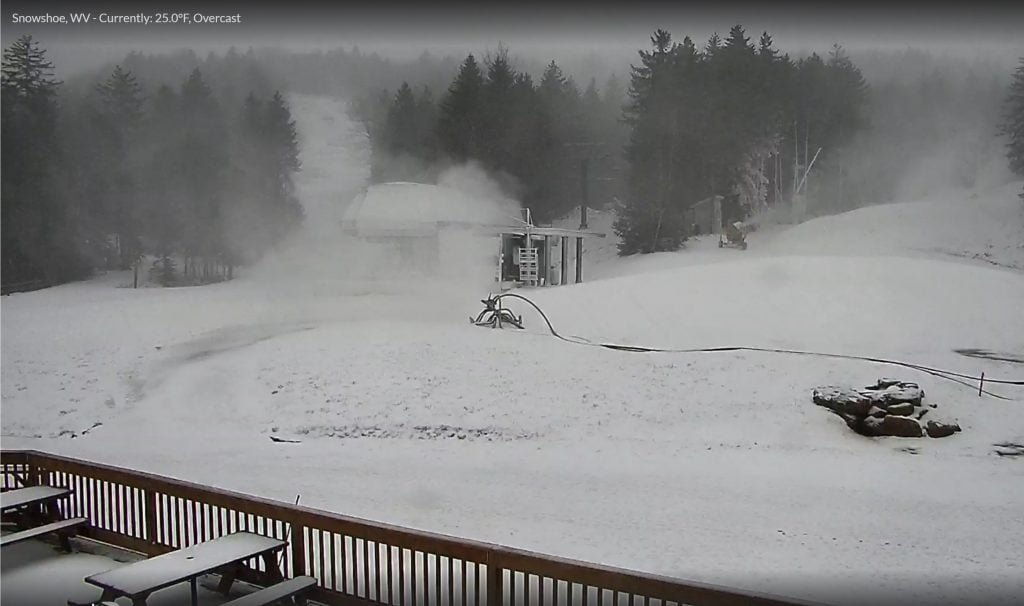 Up to 5″ of SNOW is expected…keep reading to see where!

As I type this early Sunday post it is lightly snowing here at my home base in beautiful Sleepy Hollow / foot-of-Seven-Devils, North Carolina.

I made an all day trek down to Columbia, South Carolina on Saturday and back to the mountains late last night. I’m only bringing that up to share the HUGE swing in temperatures that I witnessed.  It was around noon on Saturday when I hit the midlands and the temperature was 68°. I was attending a football game at 4pm and by then the temperatures were hovering around 71°-72°.

We tailgated a bit before and after the game and I was able to get back on the road at around 8pm. The temps were still at 64°. I was listening to the Tennessee Vols football game on Sirius radio and heard the announcers talking about HEAVY rain that was hitting Knoxville. Evidently they had power surges that took out half of their stadium lights. As I got into the Blowing Rock area it was such a dense fog that I could barely make out the road. Moderate to heavy rain and stiff winds were also blowing…and the temps were still handing around the mid 40s. I couldn’t help but think about the fact that whatever snow was leftover on Sugar Mountain was being washed away.

Fast forward to Sunday morning and the temperatures around the High Country and all ski mountain communities were in the upper 20s as of 9am or so.

Sugar Mountain Resort is making snow (still at 12:22pm) and that is great news that has already prompted a Sugar Mountain buddy of mine to text me the following, “Wanna ski?”. Yes Ron, but I don’t think they’re ready just yet.

That prompted me to have a look around the region and here’s what is happening…as of NOON, Sunday:

Appalachian Ski Mountain – Trace of natural snow according to CoCoRaHs. They made some snow but it’s 34° and the guns are off. Watch LIVE at: http://www.resortcams.com/webcams/app-ski-mtn-live/

Beech Mountain Resort – Ditto (they made snow) but now the temp is 42°. The saw about 3/10ths of an inch of snow and it is fogged in at noon.

While I am talking Beech – I received an email from Emily (last name withheld) that asked, “I noticed you did not mention Beech in your updated opening days. What do you think the chances of them being able to open Friday will be. I know the weather will be good for snowmaking but I didn’t know if you may have an inside scoop up there! 🙂 We own a condo up there and didn’t know if it would be worth making the 7 hour trip over from the coast! Thanks and I hope you have a great Thanksgiving.”

You as well, Emily! Per your question, Beech SAYS they will be open on Friday the 24th. You’re also correct about the snowmaking temps – although the temperatures are going to be borderline Tuesday night through Thursday night. So I’d keep an eye on the updates each day here on SkiSoutheast.com. Our GUESS is that they will be open with the usual “core opening slopes”. As far as driving 7 hours to make that first weekend of possible skiing or snowboarding, man I don’t know. Right now, I’d say hold off as it may not be worth the gamble for that kind of drive and commitment. Two different forecasts are predicting lows each night right around 28-30° and another less dependable one is showing 24° Wednesday and Thursday nights.

I can report that sunshine will rule the forecast Thanksgiving Day through Saturday making for great travel/shopping/football weather and awesome skiing at Beech IF they get those overnight lows to make enough snow.

I can also report that the coldest air of the season will hit us up NEXT SUNDAY, November 26th…so whatever snow that resorts make today, tonight and during some nights ahead will serve as a great base for the colder air to hit.

Canaan Valley – The low was 27° this morning and Steve Drumheller and their crew fired the guns in earnest. They were also aided by 1.3″ of natural snow and although windy, they are covering the slopes and still making snow as of 1pm. Canaan Valley has seen 9.8″ of snow so far this preseason.

Cataloochee Ski Area – Tammy Brown wrote, “Snowmaking began at 6:30am this morning for the 2017-18 season and we will open just as quickly as we can.” They did make a bit of snow and it’s 33.4° as of 12:50PM and the guns are off. Cat will get more snowmaking done later this afternoon and overnight but the temps moderate a bit after that. Keep checking back with us and we’ll update you.

Sapphire Valley – Nothing happening there until December…

Snowshoe Mountain – Their BASIN cam is showing moderate snowfall as of 1pm. See: http://www.resortcams.com/webcams/snowshoe-basin/ They are making snow across the entire mountain today. Silvercreek is reporting 25 degrees and the slopes look good! The photo leading this post is the nicest one from THE BOATHOUSE CAM at 1pm. Nice snow is falling! Watch LIVE at: http://www.resortcams.com/webcams/snowshoe-boathouse/

A WINTER WEATHER ADVISORY is in effect for today at Pocahontas County. Total snow accumulations of 2 to 4 inches, with localized amounts up to 5 inches, are expected.

Needless to say, Snowshoe has BEEN ABLE to make the most snow in the region and they have taken full advantage of every opportunity to do so.

Timberline Resort – 27° and it is snowing (about 1.5″ so far). Can’t really tell you guys ANYTHING about what’s happening there in terms of snowmaking, etc. They’re not ready for primetime just yet.

Winterplace Resort – They are hovering around 31° right now and they have seen a TRACE of snow and are not yet making snow. Probs will be doing that tonight.

Wisp Resort – 27° and no snowmaking. They received .5″ of snow so far today. We’ve probably received more emails from Wisp fans wondering when the snowguns would crank up. Here’s your answer according to Wisp’s marketing peeps:

“Mountain Operations Crew has diligently kept an eye on the weather all weekend and we are happy to say that Mother Nature has decided its time and we will be firing up the snow guns later this afternoon. Stay tuned for more posts, photos and info on all that’s going on with our snowmaking efforts.”

Those guns have evidently fired up moments ago (1:30pm) as Robert Franz posted, “Love seeing and hearing the snow guns in operation from my ski house. Looking forward to teaching beginners and giving refresher lessons to returning skiiers. Lessons are always the best way to becoming a more comfortable dynamic skiier. Sign up for a lesson and learn something new.”

Well there you go!
Wolf Ridge Resort – They actually received the most natural snow of the North Carolina mountain as of early this AM (with .5″ of snow). We’re GUESSING they made snow and definitely can tonight and Monday nights and we heard from Rick Bussey up there that they hope to get the webcam running on Monday. Stay tuned and watch.
Quick summary of ALL of the Virginia ski resorts is that this cold snap has not hit the Virginia resort mountains yet, so no snowmaking as yet.

I’m getting a lot of emails from mountain ops and management peeps today, so I’ll wrap up now and see if I can share more information later.

Until then, email me anything, anytime at [email protected]