It is Snowing and Snowshoe is Also Making Snow! 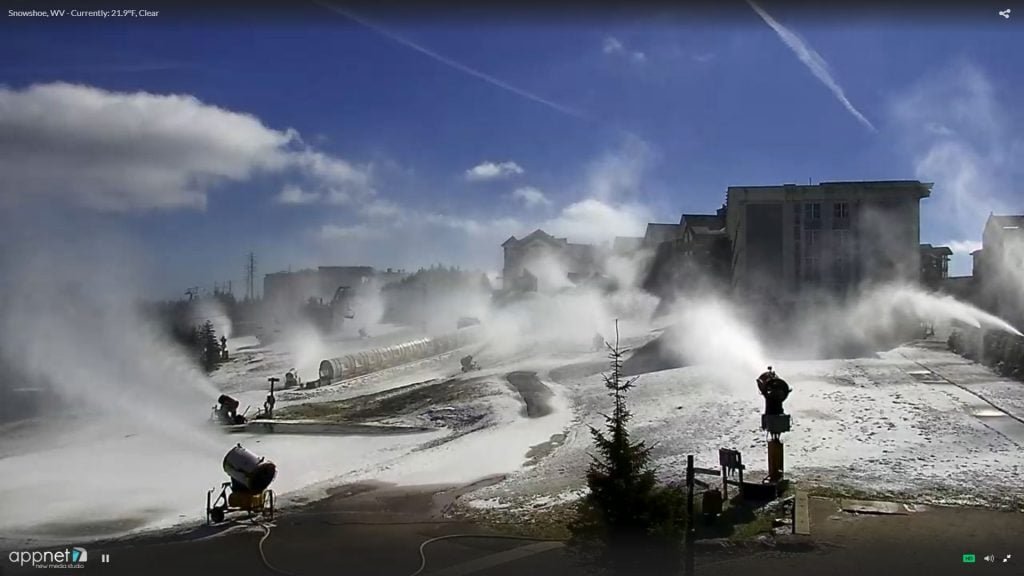 Updated as of Noon:
There are a couple of noteworthy updates over the last few hours.

Thanks to some input from my “sister from another mister”, Lenora Testerman from up in Davis, WV (home to Canaan Valley Resort), it was flurrying there as well this morning. (More than a few people emailed me that they too were seeing snow in various locations around WV, MD, VA and NC.)

By the way, Lenora informed me that they are seeing a couple of days of cold temps, but that they also know that there are a couple of mild days ahead and that their team is going to hold off until perhaps that next window of snowmaking opportunity to crank up the guns.

I just updated the photo at the top of this story from up at Snowshoe where it is STILL 21° as of noon. Snowmaking is beginning to show some nice results on the slopes there.

Also thanks to Joe Berry who emailed me a couple of times about the fact that Sugar Mountain is making snow up on their summit at 28° as of noon. Interestingly I could not see that camera on my desktop here at the office on either Firefox or Chrome…yet I COULD see it on my phone. The summit cam was pretty bad but I could make out some white.

Here’s what we got by phone: 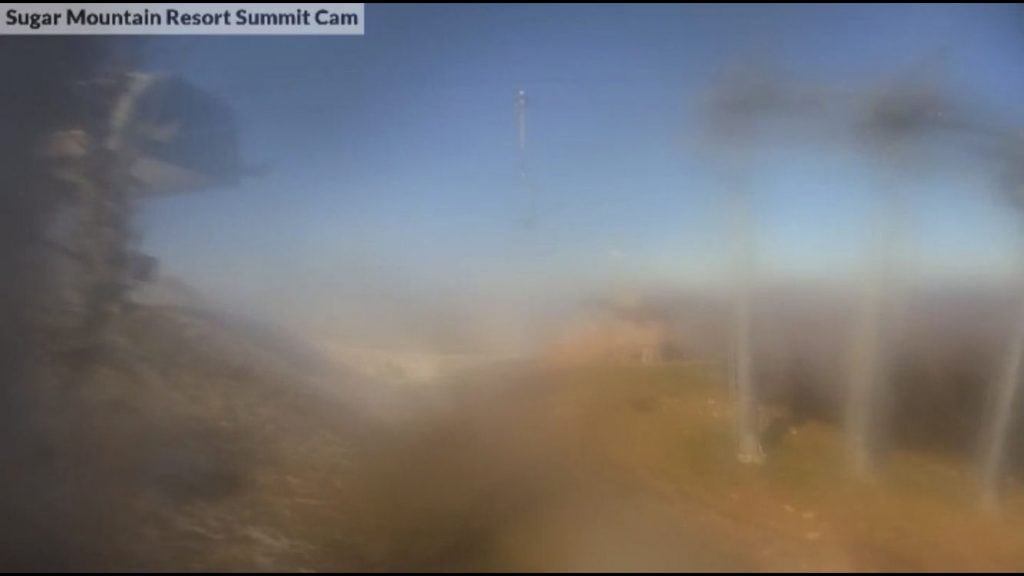 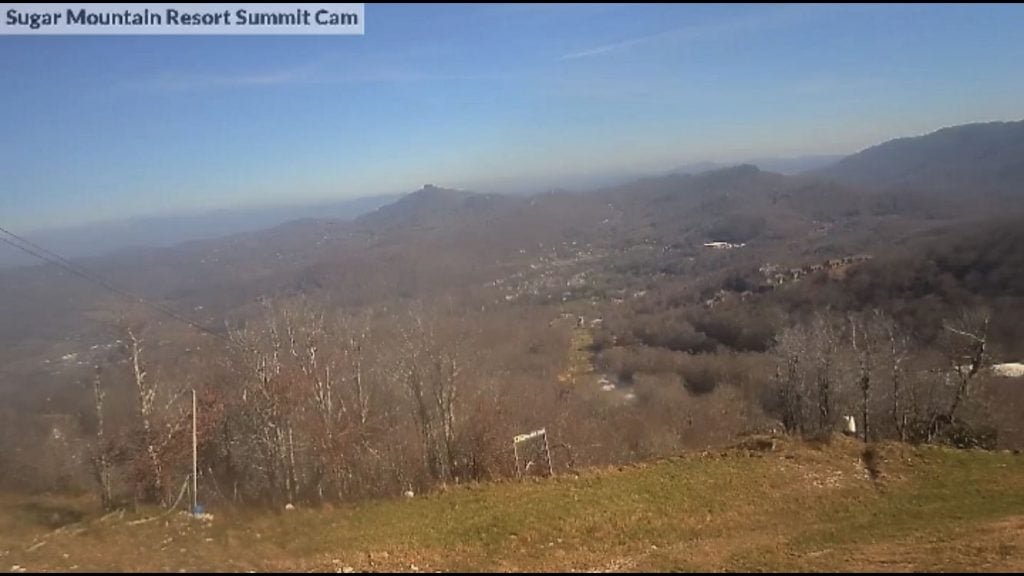 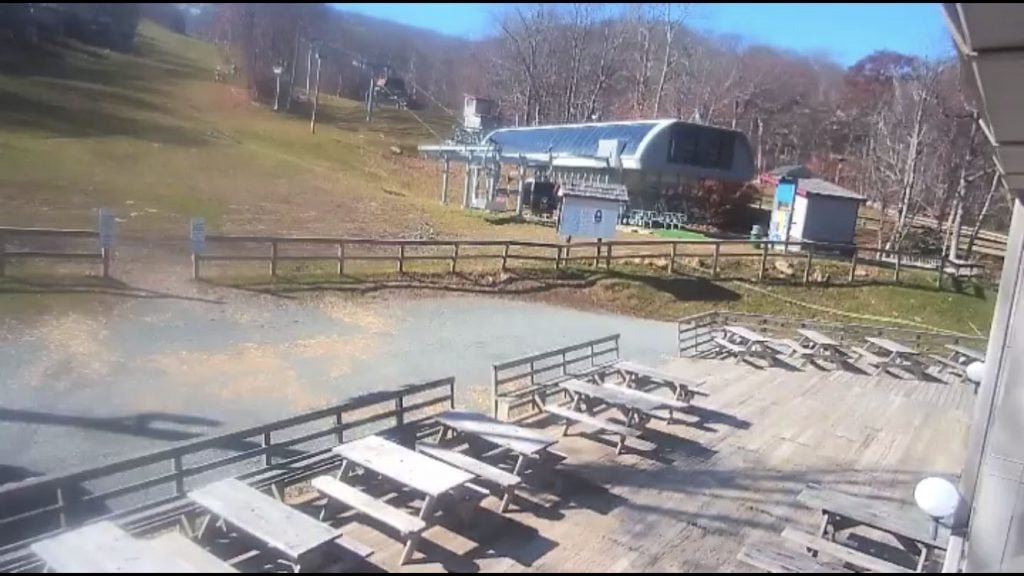 Joe expressed his own HOPE that we may be riding on snow by Sunday and Gunther and his guys CAN perform miracles with snow, but that might be a little stretch. I’m thinking Monday or Tuesday but we’ll see.

It’s Saturday, November 10th and there is some light, natural snow falling in our region and one ski area making snow this morning. For the second time this pre-season, Snowshoe Mountain Resort is making snow across a lot of their mountain. It is 23° this morning at Snowshoe and I saw snowmaking happening on their Silvercreek side of the mountain as well as down at the Boathouse, Ballhooter and also up top at Shavers.

As mentioned, this is the second time this preseason that Snowshoe is the only ski resort in the Southeast and mid-Atlantic making snow. The reason is pretty simple – other than over at Wisp Resort (where the 9am temperature is 21°) it isn’t cold enough to make snow anywhere else this morning. That will change tonight as temps are diving into the low 20s across many mountain tops this weekend and we are expecting to see Cat, Sugar and maybe a few other ski areas making snow. (Appalachian may be among those.)

We mentioned Natural Snow in our title this morning and that is because at 9am this morning it was 21° and lightly snowing at Wisp Resort in McHenry, Maryland. They too may be cranking up the snowguns tonight. We’ll see.

Snowmaking COULD happen on as many as eight of the next ten-twelve nights at various ski areas so it’s really looking like we will see an opening or two or three just before Thanksgiving after all! Once we get a little deeper into the snowmaking window…we’ll be updating you on opening announcements. (We kind of expect Cat and Sugar may open up within the Sunday-Tuesday timeframe this week.)

I hope that you guys have been enjoying some of the “History of Ski” content. Those have been posted by Amanda Kundert and Matt Laws. They have been speaking with all of the ski area ops and getting some nice input. Our ski resorts of the Southeast and mid-Atlantic have some colorful stories behind them. Looking at the challenges that our resorts have even in these modern times with so much in the way of snow-making technologies…it is hard to imagine the hard work and guts that went in to the building and opening of our various ski resorts. Those guys and gals were true visionaries. We’ll continue to post them.

More soon. Until Next Time…

email me anything on your mind at: [email protected]