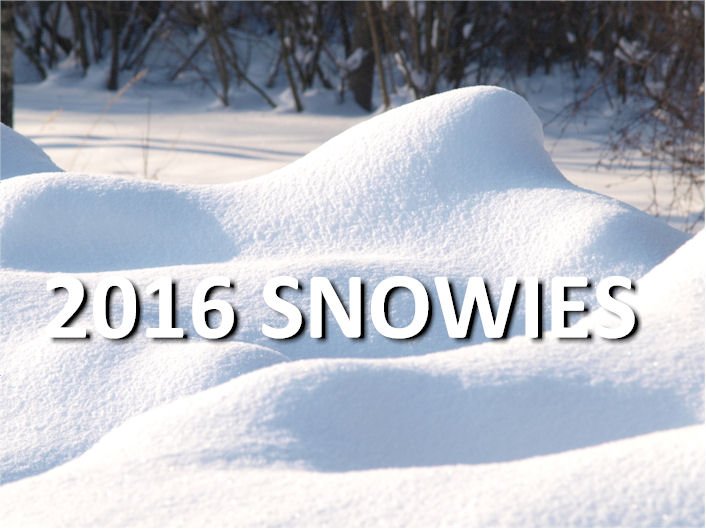 This is my last column of the year and to put a candle on top of this season that has seen Mother Nature throw enough inside fastballs, that most resort operators have dusted themselves off more than everyone realizes.  Again this season, I have come up with Joe’s eleventh annual “SNOWY” awards or “SNOWIES” whichever one you like the best, I am easy to get along with on this matter.  The three-person committee (me, myself and I) picked out ten categories and spent way too much time tabulating the results (hope you are not falling for that line).  So without anymore fanfare, here are the 2015/2016 season “SNOWIES”.

1.    Most Indecisive – Mother Nature – other than one blizzard in mid-January she never really dropped winter on the southeast region.

2.    Most Valuable – Every skier and snowboarder out there, because after the weather finally allowed the mountain ops folks to cover the slopes, you came out to make a lot of turns in January, February and early March.

3.    Unsung Hero – The region’s snowmakers, when temperatures allowed the slopes were covered.

4.    Most Overrated – For the second year in a row, the naming of winter storms by The Weather Channel.  It’s all about the advertising dollar for TWC these days.

5.    Go For It – The various mountain operations in the southeast that roll the dice every year and work or fight with Mother Nature to get it done.  Way to go.

6.    Fighting To The Bitter End – Every resort in the region as most are closing with much more snow than skiers or snowboarders.

7.    Most Patience – To the chaperones who handle the young people on school trips to the various resorts.  Every one of you have the patience of Job.

8.    Going The Extra Mile – To the various resort employees who while out skiing on their free time always stop to help skiers or snowboarders on the slopes, even if they don’t really have to. Great karma.

9.    Cy Young (Best Pitch) – All of the resorts that are providing very inexpensive season passes for the end of this season and all of next season.  That really helps people be able to afford the great sport.

10.    Stepping Up To The Plate and Hitting It Out Of The Park – The folks with Learn to Ski and Snowboard month promotion.  This sport needs new, young participants and the promotion goes a long way in helping do just that.

That’s it folks for the 2015/2016 season – it’s been fun riding with you again this year, this time for real and to top it off seeing my son make his first ever turns. Just remember to always be patient as whether it be cold or whether it be hot, we’ll weather the weather, whatever the weather will be.  Think about it!  Time to get everything tuned for the 2016/2017 season, my 32nd in the industry, wow how time flies when you are having fun.