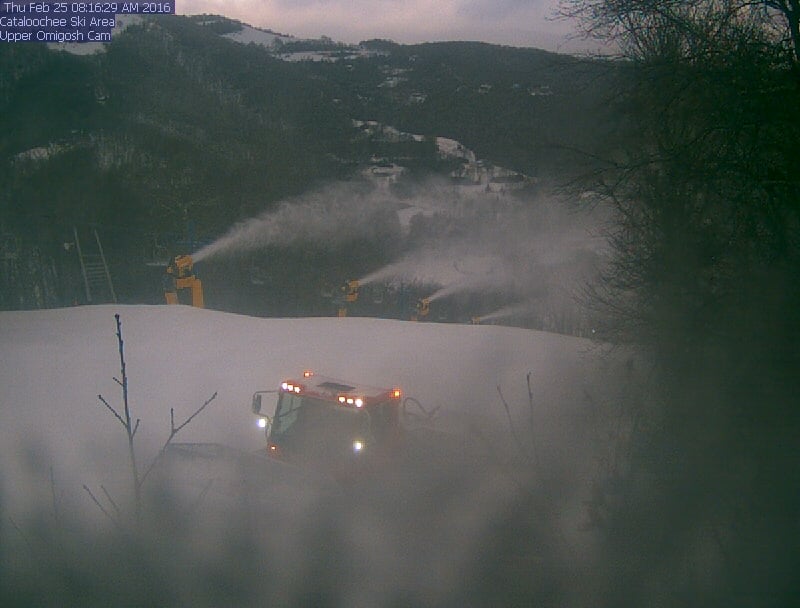 Ah, finally.  After several days of rain and warmer temps winter has returned and we actually have some snow to talk about this morning.  The last few days have not been great to us.  Yesterday’s weather included some storms that caused a few of the resorts to shut down early for the day.  Thankfully, that is all behind us now and we have a few days of cold and snow to look forward to.

A little bit of snow has already fallen as of this morning.  Numbers aren’t very impressive as of right now, but who cares.  It’s snow and we needed it.

Some flakes were falling at Wolf Ridge this AM 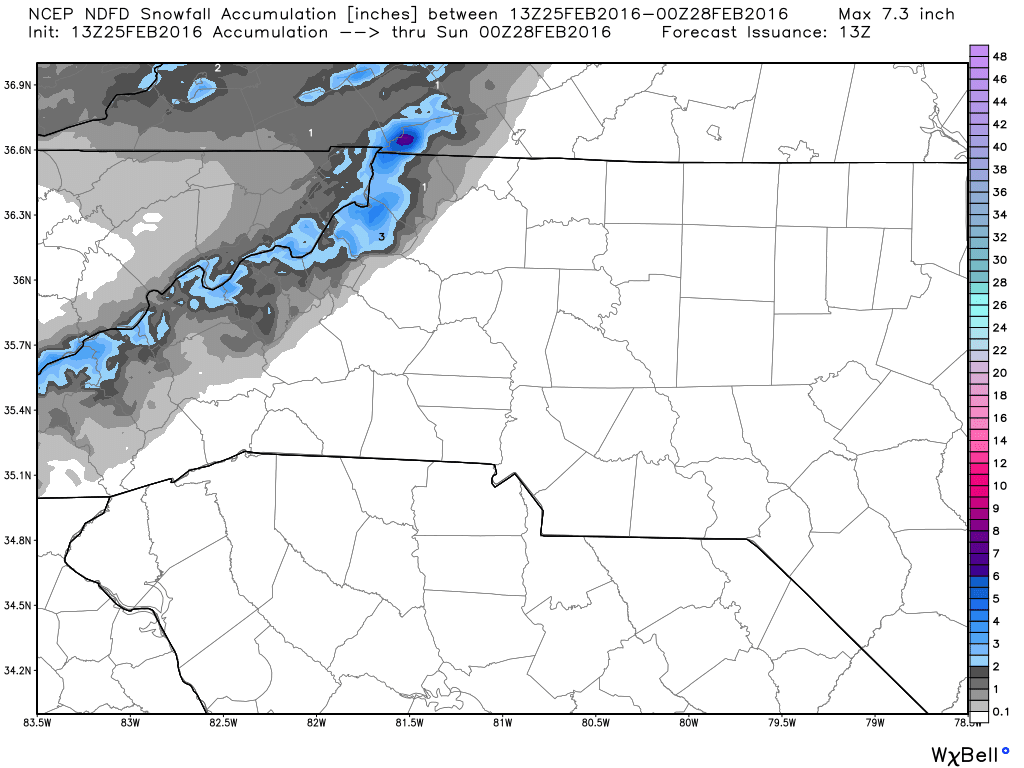 The forecast for the West Virginia resorts is a little more bullish.  The general consensus from the National Weather Service is in the 3-8″ range up that way.  Here’s Snowshoe’s forecast from the NWS.

Today
Snow showers. High near 24. Windy, with a west wind around 26 mph, with gusts as high as 45 mph. Chance of precipitation is 100%. Total daytime snow accumulation of 2 to 4 inches possible.

Tonight
Snow showers. Low around 13. Wind chill values as low as -3. Windy, with a northwest wind 26 to 29 mph, with gusts as high as 48 mph. Chance of precipitation is 80%. New snow accumulation of 2 to 4 inches possible.

The higher end of that range would be 8″ and that sure would make for a fun day up there tomorrow.  Heck, I’d take the lower end of that range right now as even 4″ would fun.  I’ve been powder deprived this year (Tahoe in two weeks!), so even a few inches of fresh snow gets me excited.  With the high winds a lot of spots will get windloaded as well and make it even deeper.  Should be fun!

We also have much colder temperatures accompanying the snow this morning.  Temperatures were a good 20 degrees colder for some locations.  A majority of resorts were below freezing this morning and there were a handful or so that were making snow once again.  App, Beech, Cataloochee, Sugar, and Snowshoe all reported that they fired up the guns overnight which was very nice to see.  I could be wrong, but I believe it’s been a week plus since we’ve seen any snowmaking.  No snowmaking + warmer temps + rain = this cold and snow was very much needed.

Snowmaking at Cataloochee this morning.

Several resorts that haven’t made snow yet are noting on their snow reports that they will be doing so as soon as possible.  Those include Massanutten, Ober Gatlinburg, and Wintergreen.  So we should see the list of resorts who made snow grow by a few tomorrow morning.  Hopefully.

The weekend still looks good if you have a trip planned.  Saturday looks like the better of two days as Sunday is going to be much warmer so the snow won’t be quite as nice.  Both days should see plenty of bluebird skies though.

I’ll talk more about the weekend tomorrow and look ahead to next week’s Ski Southeast Summit at Snowshoe Mountain.  We’re only 8 days away now!  In the meantime, enjoy the sights of snow falling today over at Resort Cams.  We’ve got every resort covered!

Previous Post
One More Day of Rain, Snow On the Way
Next Post
Canaan Valley Resort Offers Free Lift Tickets to Weeknight Guests Through the End of Ski Season