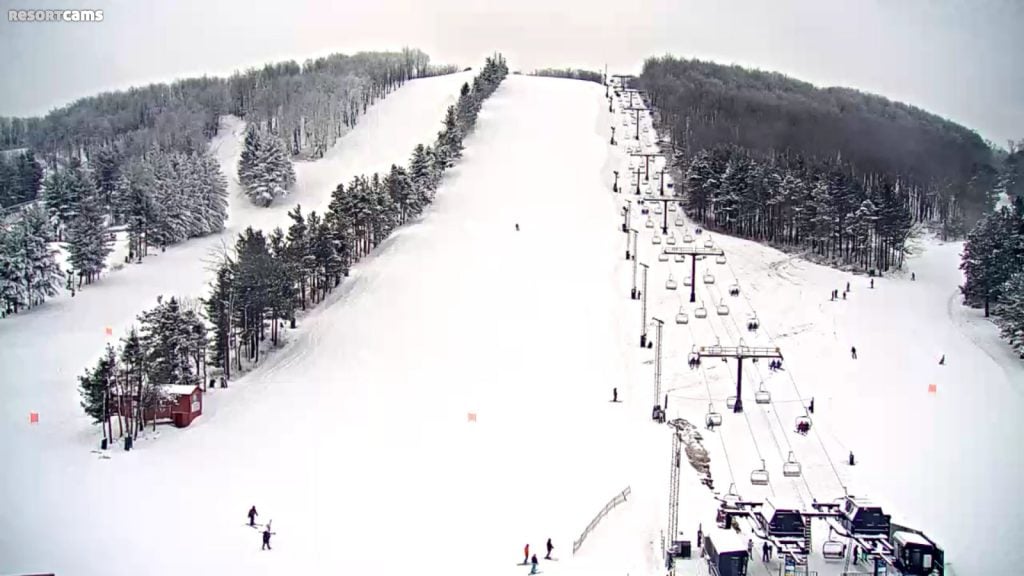 Yes, I am stealing our Joe Stevens’ tagline this morning. The photo above is from the LIVE WISP RESORT CAM THIS MORNING! 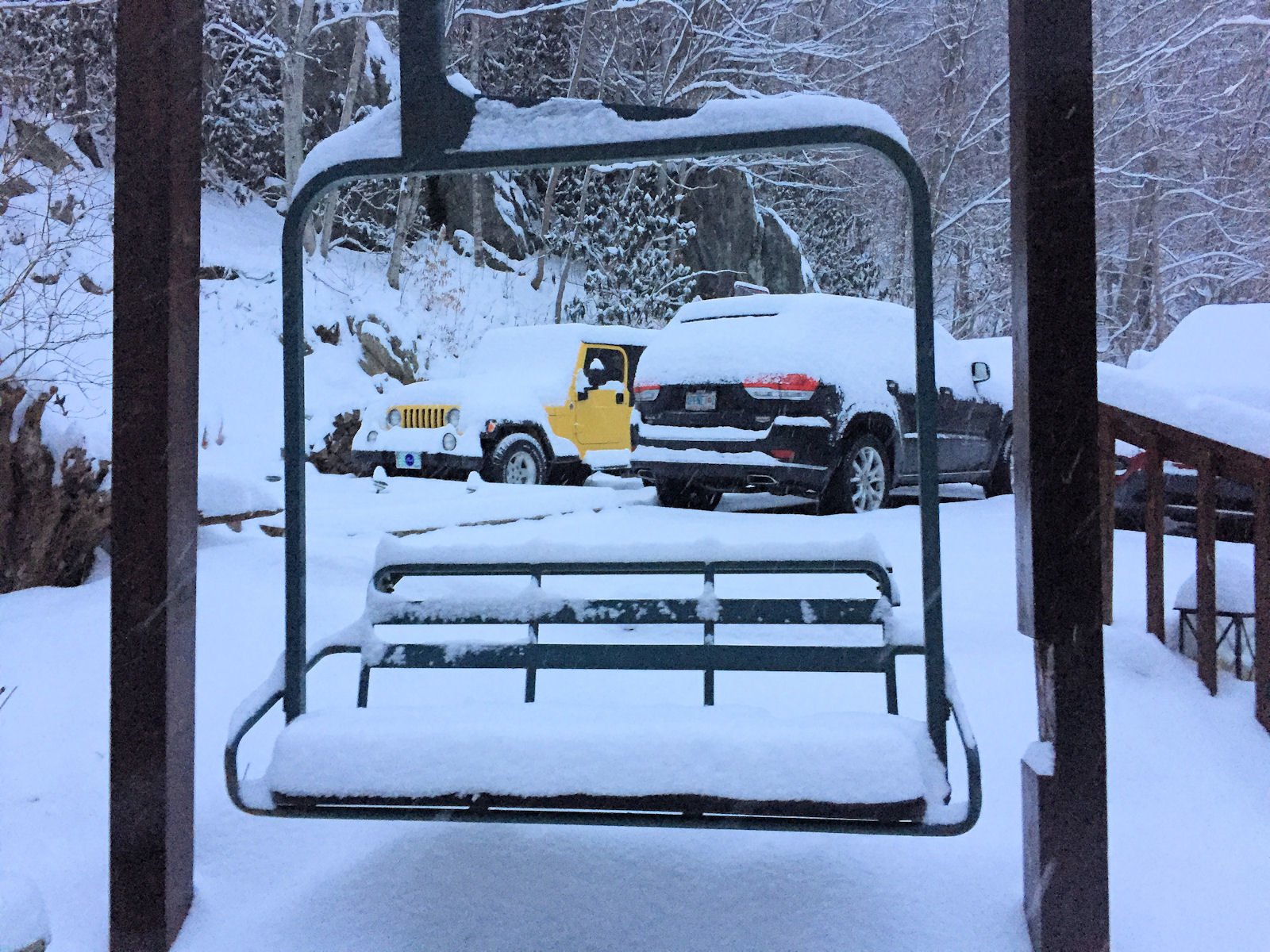 One of the old Green Chairs from Sugar Mountain a few years back. Click to Enlarge!

As I woke this morning and looked out of the French doors of my bedroom, I witnessed the biggest snowfall of the last two years. A good 8″ of fresh snow lays beautifully across the railings, tree limbs and everything else. It prompted me to post a nice photo of the “Doble Mountain Chairlift” which is actually one of the old green chairlift chairs from Sugar Mountain that I put up in my yard.

I bought it several years back and recently installed it for extra deck seating. Hopefully that old Sugar chairlift will inspire ‘mother nature’ to dump some Sugar-like snowfall in my yard! 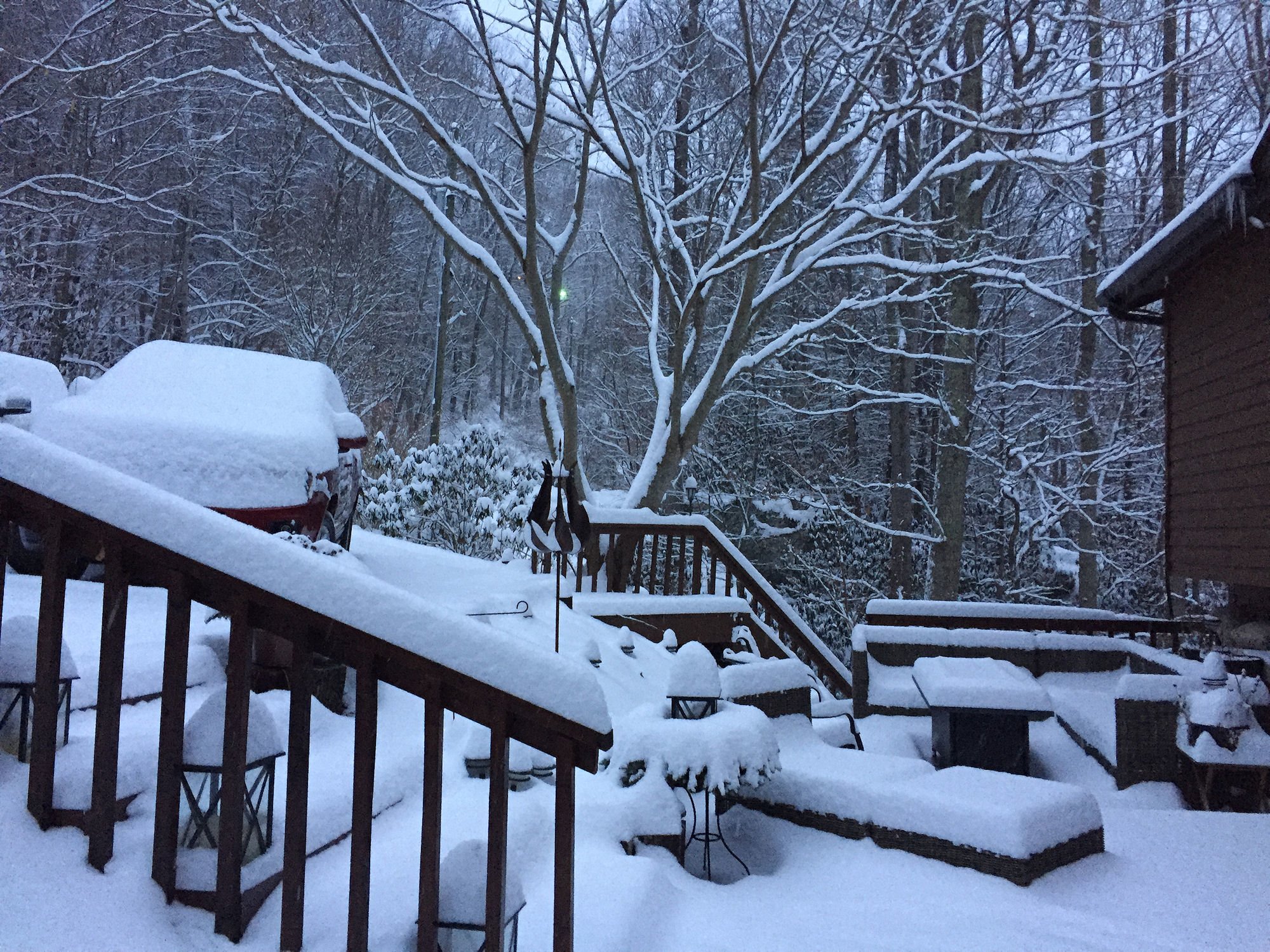 8″ of snow blankets my front deck. Click to Enlarge!

It has continued to snow for the last few hours as I went through updating the snow totals from around the region. We’re still getting moderate snowfall as of 9am. Everyone is excited as my skiMail inbox is being flooded with people from OFF the mountain who are ALSO getting significant snowfall. Our Kenny Griffin, who lives in Charlotte reported 4″ of new snow.

We’re seeing from 3″ to 8″ of new snowfall across the ski mountains this morning with the highest snow totals coming from Beech and Sugar Mountain this morning. Those reports are right on as we’re seeing a good 8″ now on my deck and being reported from several CoCoRaHs snow reporters.

The largest snowfall totals being reported this morning are actually OFF THE MOUNTAIN over in Norlina, North Carolina which is northeast of Durham in Warren County (close to the VA line and in the northeast portion of the state) where 12″ of snow has fallen! Old Fort and Morganton (in the foothills) has seen 9″ of snow so far this morning.

Kenny Griffin informed me that we saw 240,000 cam views yesterday on ResortCams.com and that was as the snow was just starting up! He JUST TEXTED me at 9:08am saying, “I think we’re gonna have a record day today!”

News stations from all across the southeast and mid-Atlantic are showing our LIVE STREAMS on the air and visitors are bombing the servers. Kenny reported that are new server setup is barely being taxed! That’s awesome. I remember the days when this kind of snow event would all but shut us down!

I will tell you that as I was touring around the LIVE CAMS most of them were near “white outs” as the snow is still falling and not making for the prettiest views right now. Once the snow clears out and things clear up a bit, there will be some amazing photos ops. I’m sure Kenny will share some updated data as well. 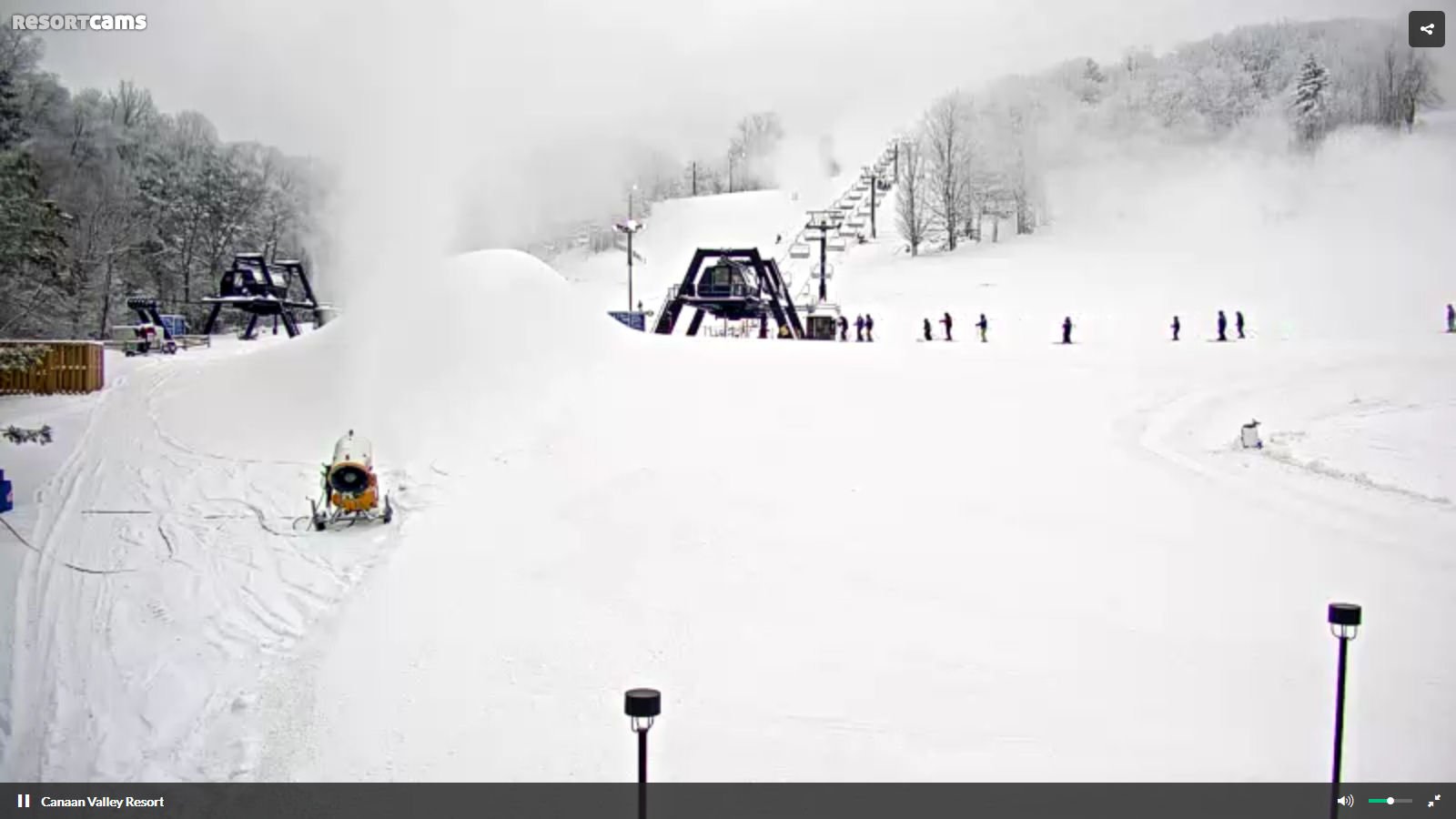 One of the clearer views this morning was at Canaan Valley! Check out that huge whale of snowmaking! Click to Enlarge!

I and my crew are torn between simply going out and hiking around in the surrounding forests or going snowmobiling with some friends. (I know, it’s a tough life!) We’re also toying with the idea of heading to Beech to make some turns today or tomorrow. We’re all still fighting head colds, sore throats and everything that comes with these crazy temperature swings.

Last week we spent 7 days at Snowshoe Mountain where we saw nearly a foot of snow over three days and then we got back to the High Country and earlier this week we had temps in the upper 40s and 50s. Now we’re getting dumped on with snow and 6-10° temperatures.

The snow will reportedly move out around lunchtime today and that’s when the gorgeous cam views will be on display. That is also when the arctic cold temps will be moving in. Highs today here in the High Country should be around 6° with a low tonight in the MINUS 1-2 degrees. Cold temps will stick around through Tuesday and that means tons more snowmaking for the ski areas although I think most of the resorts will leave snowmaking ops to closed terrain.

Enjoy the snow – wherever you are – and if you have the opportunity, head to the mountains. While road condition may be weird in your neck of the woods, the mountain community DOT crews do an awesome job of keeping the main roads and highways open to the ski areas.

Here’s a tour of the region and there’s LOTS of POWDER the play in!

Beech Mountain Resort – 7° and 8″ of snow being reported and that is pretty close to what we are seeing from Sugar, Seven Devils and Beech CoCoRaHs reporters. That takes Beech to 16″ on the season and they are open with snow tubing, terrain park features and 9 of 17 trails open for day and night sessions.

Appalachian Ski Mountain – 12° and 6″ of new snow and that takes them to 10″ on the season. App is open with 8 of 12 slopes, terrain parks and ice skating.

Sugar Mountain Resort – 6° and 8″ of new snow since Friday and it is still snowing! That 8″ matches the snowfall for the season up until today so Sugar has now seen 16″ of snow. They are open for day and night sessions with 10 of 21 trails open. Snow tubing and ice skating are open as well.

Wolf Ridge Resort – 8° and 7″ of new snow reported and it is still snowing! They have snow tubing open as well as 8 of 15 trails for day and night sessions. This is the first real snow of the season for Wolf.

Snowshoe Mountain – 2° and reporting 3″ of fresh snow, 8″ in the last 48 hours, 17″ this week and 34.5″ on the season. Three new black diamonds– Upper Shay’s Revenge, Widowmaker and Bear Claw– open today, along with J-Hook, a blue trail. With a fresh surface on everything, it will be a day for tearing up the mountain. 50 of 57 trails are open on 189 acres of terrain!

Canaan Valley Resort – 3° and reporting 2.5″ of new snow; 9.6″ from the storm and 42.1″ on the season now. They have 15km of cross country skiing terrain open along with 16 of 47 trails for day sessions only. Ice skating is open as well as tubing.

Speaking of Canaan Valley, David Lesher reported this morning, “We saw periods of very light, fluffy, dry snow continuing overnight, producing an extraordinary 40:1 snow/water equivalent. Near calm wind through this entire event has also contributed to that. Very light snow and temp +3F at 7AM.”

Timberline Resort – 3° and the same 9″ from the 48 hours snow event. They are open for both day and night sessions with 12 of 39 trails open.

Wisp Resort – 5° and reporting NO new snow in the last 24 hours but they did get 7″ from the 48 hour storm and are now at 18″ on the season. They are promoting a “Heightened Chance of Downhill Adventure” on 18 of 34 trails open for day and night sessions along with ice skating, tubing and mountain coastering.

The Omni Homestead Resort – 10° and it is snowing rather hard this morning via the webcam although they are not reporting any snowfall. We received reports of 3″ of new snow to take them to 6″ on the season. They are open for day sessions only with 3 of 9 trails and tubing open as well. It looks awesome at The Homestead today.

Cataloochee Ski Area – 7° and snowing as of this report. Tammy Brown is reporting 5” of fresh POW POW!!!! It’s going to be a great day!” She added a, “Yippie!” That is the first appreciable snow of the season for the Maggie Valley ski resort. They are open today and tonight with 7 of 18 trails and snow tubing as well.

Massanutten Resort – 12° and they saw 2″ of new snow, which matches what they’ve seen so far this season (4″) and they are open today and tonight with 8 of 14 trails and snow tubing. Free Style demo days Saturday and Sunday.

Wintergreen Resort – 6° and 3″ of new snow although they are not reporting ANY (crazy!). That is their first significant snow of the season and nobody is reporting it?!?! Anyway they are in super shape for this weekend with 16 of 24 slopes open for day and night sessions, snow tubing and terrain parks are open!

Bryce Resort – 13° and 2″ of new snow and 7 of 8 trails open as well as snow tubing for day and night sessions.

Ober Gatlinburg – 11° and 5″ of new snowfall (their first of the season) and they have their huge ice skating rink, mountain coastering and snow tubing open as well as 5 of 10 trails for day and night sessions. 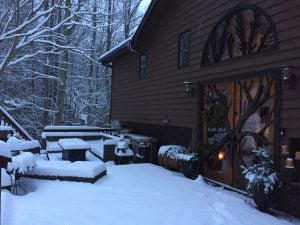 Light snow is still falling but the skies are clearing at least here in the High Country. Click to Enlarge.

UPDATE: 9:46am – As I am posting these last notes, we are seeing the snow begin to cease and the skies brighten a bit. This should be an epic day on and off the ski slopes.

That’s it for me today. Enjoy your day.

Previous Post
Lots of Snow and Cold to End the Work Week!
Next Post
FIRST TURNS OF THE SEASON, ALWAYS MEMORABLE