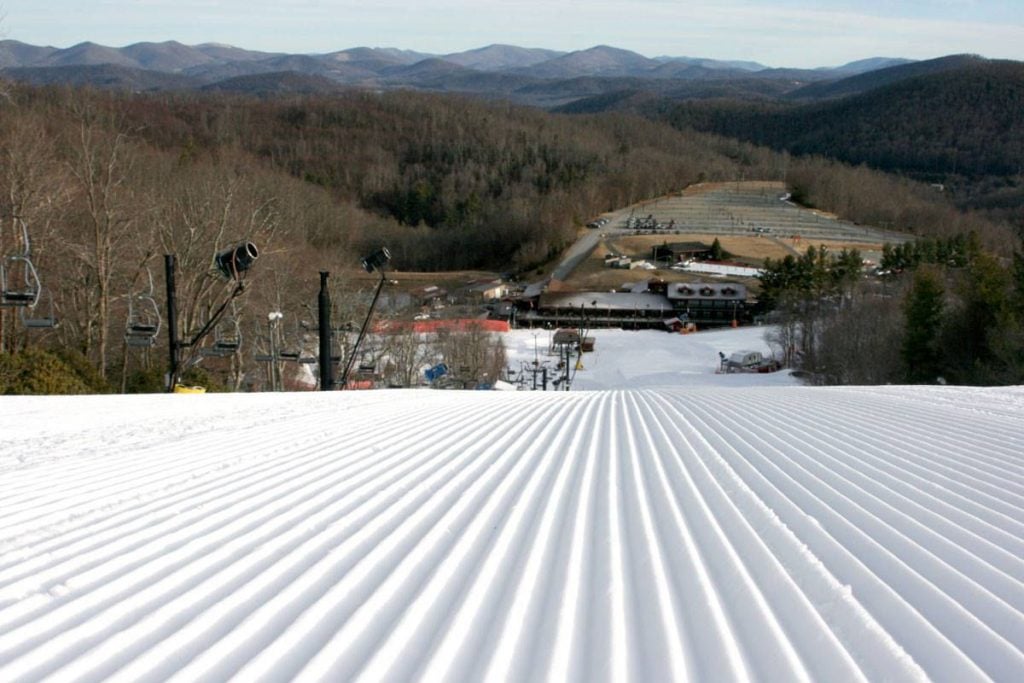 That’s right. Not ONE of the other ski areas are reporting a base depth drop after one of the warmest, Spring days of the season. Saturday’s high temp soared to 58.7° in Boone and Blowing Rock and to 49.9° atop Beech Mountain. It was from 45-62° for highs across all of the Southeast and mid-Atlantic’s ski resorts on Saturday.

According to today’s forecast we’ll see another sunny Sunday with highs of from 47-60° across all of our mountain communities.

Get out and enjoy the conditions on this beautiful Sunday as some rain is in the forecast across the entire area for this evening and into the first part of this week.

Cold air should re-enter the region on Monday evening as we’re seeing some light snow and temperatures dipping into the TEENS again Monday night. Expect the snowguns to crank back up.

CHECK THE SNOW REPORT FOR ALL THE DETAILS

After I posted my Saturday mountain blog I received a few pretty good emails that I thought I’d share. Since there’s only a couple of ways that I can keep reporting about how NICE the conditions are right now – I also looked BACK into some of my earlier season emails and thought I’d share some of the more unusual ones.

Yesterday I alluded to the fact that Sapphire Valley and Sugar Mountain lead the entire United States’ ski areas in base depth being reported. I really think Sapphire’s is uber-exagerated, as they are reporting a base of 30-120″. IF there’s a whale of snow on that mountain that is 10 feet deep you can’t ski on it…and it certainly isn’t across a wide expanse of their mountain.

That “news” included a comment of mine that compared base depths to other national leaders…one of which was “Bogus Basin” in Idaho. That prompted an email from someone who I GUESS didn’t read or believe that Bogus Basin is a real mountain in Idaho.

“I’ve followed your website for years and I know that you seem to be anti certain ski slopes. But to makeup a name like bogus to express your opinion is unprofessional and doesn’t make you look good besides ski slopes have been inflating base depths ever since they’ve had ski slopes.”

I could REALLY have fun with this email, but I’ll pull some punches just a bit. (I emailed Thomas directly and he chose to get pretty profane in his responses, so I’ll take my gloves off and share my response here. How unprofessional of me, right?) 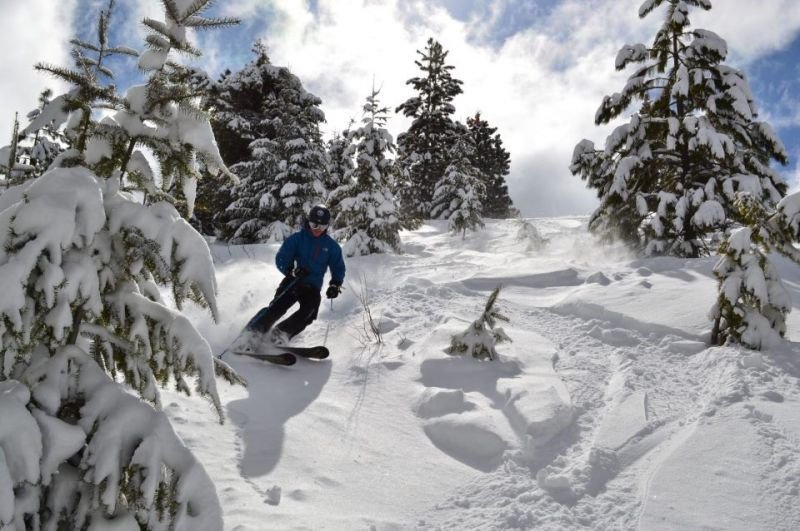 Okay Thomas…FIRST they’re called ski areas or ski resorts. Ski SLOPES are the downhill slopes and trails ON a ski area or ski resort. SECOND, there IS a ski resort in Idaho named “Bogus Basin” so I wasn’t making the name up to illustrate any notion that I felt that some ski areas were mis-reporting their base depth. THIRD, I have NO anti-ANY-ski area sentiments. None. Nada.

…and finally I don’t think that JUST BECAUSE ski resorts have been mis-reporting base depths for years – that we should simply accept it.

I AM clearly stating that I don’t believe that Sapphire Valley has 120″ of base depth that can be skied on their two slopes. I’ve had some “fun” at their expense this season because someone over there has chosen to report MAN-MADE SNOW as “NEW SNOW” all season long and when you combine that with their reporting of a TEN FOOT DEEP BASE it does come off as a bit disingenuous.

As for the rest of the ski slopes (I mean resorts), they’re base reporting is “within reason” in terms that they’re all reporting base depths that you’ll probably be able to ride on their mountains. However NOT ONE of the area’s ski resorts take measurements on a daily basis. Most just know ABOUT how deep their bases are as they’ve “done this” for a few decades. They post the numbers as a relative bit of data and that’s that. They fluctuate their numbers when they feel it is appropriate.

(I feel like I JUST gave away Colonel Sanders KFC recipe!)

As far as the name “Bogus Basin” I had no CLUE where the name came from, but leave it to one of our readers to give me an assist.

Teresa Chance wrote, “I thought you were pulling our legs with the ‘Bogus Basin’ resort name. But I looked it up and found that there are two stories about where they got their name.

One version dates to the 1880s, when two prospectors loaded a shotgun with a few dollars  worth of gold dust and blasted it into the walls of a worthless cave near Shafer Butte. They galloped down to Boise where they slammed their “find” on a local bar and sold shares in the “mine” to gullible patrons. By the time the new owners realized that they had been fleeced, the swindlers had disappeared.

Another version is a two-paged story of a hard-to-find drainage and an 1863 mining claim. Captain Tom Morgan and a group of no-accounts, filed a claim in the area of the current base facilities, near Shafer Butte. Later they returned to Boise with the fruits of their labor, reportedly as much as $50,000 worth of gold. After a legendary spending spree, it was discovered to be Fool’s Gold (iron pyrite) that had been chemically tuned up. The group was neither caught nor ever seen again.

THANKS to Teresa for WikiPedia-ing that!

SKISOUTHEAST IS ONLY ABOUT “FEELGOOD ISSUES”

…or so says Peter Buhanist of Helsinki, Finland. Peter emailed me:

We are a Nordic expat family living in Washington DC. After some serious brainstorming before moving here, we decided to take our skiing gear to the US. Having nearly forgotten about them, I suddenly saw them in the basement and remembered it is winter right now. Unfortunately, your website is high on “feelgood” issues but low on actual information. Do you have cross-country skiing maps? Could not find them. How many km/miles of groomed (classic style) tracks you have? Do you have downhill skiing maps? How much do you charge for one day downhill skiing? What is the max. elevation of your downhill runs? How many black runs? Red runs? are the slopes icy or what? Is the lift capacity coping with demand or is there much waiting time? Perhaps I was just navigating badly but could not find these. Thanks beforehand for answers!

Well dang, Peter! Way to trash on our website and THEN ask a bunch of questions that you want me/us to help you with.

As per Cross Country Skiing “MAPS” – no we don’t include them on the website – YET. Timing is everything I guess, but I AM CURRENTLY in discussions with one of the region’s best authorities on cross-country terrain. Randy Johnson has written MANY books on the subject, complete with maps, and we’re trying to recruit Randy to “come on board”. He’s an undepletable well of knowledge about Southern Skiing and he’ll help us get away from the “FEELGOOD” direction that our website is in now.

As far as a lot of those questions, Peter…just click on ANY ski area link and then click on “MOUNTAIN STATS” and you’ll see the trail maps and verticals for all the mountains that we cover on the website. It will also show you the BLACKS, BLUES and GREENS. We have no REDS…

By the way – LIFT CAPACITIES are also covered. Hmmmm…we DO HAVE a ton of information on here!

In closing, our long-time readers will tell you that we’re NOT JUST about reporting on “FEEL GOOD” issues on this website.

MY LAST SHARED EMAIL FOR TODAY includes something cool that I’d never heard before. Amy Ames of Atlanta wrote:

“I really enjoy reading your daily stories about skiing in the area. It’s obvious how much passion that you have for the sport and especially as it pertains to the south. I thought you’d enjoy another person’s take on skiing.

He said, “For me, personally, skiing holds everything. I used to race cars, but skiing is a step beyond that. It removes the machinery and puts you one step closer to the elements. And it’s a complete physical expression of freedom.”

That was written by Robert Redford

Amy included some other questions that we answered, but THANKS Amy for sharing that. I knew Mr. Redford was an avid skier, but I had never read that. Thank you also for your kind words. Yep – I think I have a passion for skiing. I don’t get to do it enough…and certainly not as much as many of our readers, but I too enjoy the hell out it.

As mentioned earlier ONLY APP reflected any drop in base depth…and hence I start today’s tour with the popular, Blowing Rock ski area.

Beech – 100% Open and 6 of 7 lifts operating for day and night sessions. For those wondering, the one lift NOT operating is the #6 lift. The QUAD has been running fine after some sporadic issues.

Ober Gatlinburg – 9 of 10 slopes open for day and night sessions.

Wintergreen – 24 of 26 trails open – Big Acorn and The Advanced Terrain Park will be closed for events. Open for day and night sessions.

Snowshoe – 55 of 60 slopes open and the mountain is open for day and night sessions.

Wisp – Dropped 4 slopes to now offer 27 of 34 today and open for day sessions only.