10:54am: Update: man the snow is really coming down at some of the ski areas right now. We’re seeing some rather heavy snow on the Wolf Laurel cam so maybe that is heading up and will bring more snow as the day goes on.

Good Lord are we getting bombed this morning! I wish I was talking about snowfall. We are getting some natural snowfall, but not what we’d want yet! The "bombing" I am alluding to is our webcam and snow reports pages!

I get started every morning with any natural snow and snow reports around 6:30am and this morning I was up a bit earlier anticipating the snow and lots of questions, etc. The snow had not started in earnest until just before daybreak and quickly dropped fron one-half to one inch of snow around most of our coverage area. Snowshoe reported one-half inch of snow at 6:30am, Wisp about the same, Winterplace nothing. Beech and Sugar had already received 1" of new snow. Then it kind of dropped off in intensity but as of this writing (9:00am) it has picked back up and we will try to get you some video of the snow falling once I wrap up this morning’s update.

Sugar Mountain is reporting 2" of snow thus far and we’re sorry to report that isn’t the case peeps.  Maybe Sugar’s admins need to look at that Dartmouth College study that came out last week that claimed that ski areas exaggerate snowfall! Naw, really!?!

Sugar’s admins are true snow lovers and like myself they find it hard to control their enthusiasm up there when it comes to natural snowfall reporting.  Last season Sugar probably did one of the best jobs of all resorts in the region in reporting snow, but perhaps there’s some pent up frustration over the fact that the season didn’t begin in November and they’re in a hurry to get the snow totals up where we’d all like to see them.  The problem is that Sugar, Beech and most of the higher elevations have only seen one-half to one inch of snow thus far as of 9:36am.

We have two official snow reporters at the top of Sugar and the official report as of 6:30am this morning was less than one inch of snow. One look at the live cams at the top and bottom of the mountain confirms that assessment.

(I know that we’ll get an email or two asking us "what’s the big deal, let them report what they want" but that isn’t the way we roll around here. We know that people will head to one resort or another looking for the most snow and if one resort reports more snow than another, visitors will go there. We just want accurate reporting so all resorts are on an equal playing field.)

THE COOL THING IS THAT IT"S SNOWING!!!

Top billing today has to go to Ski Beech or Beech Mountain Resort as they prefer to be called these days as they opened with North Carolina’s most open terrain on their first day of operation for the 2009-2010 ski and snowboarding season. They open with 4 trails today for day skiing. We called up there this morning because they don’t show a snow report on their website anymore. There is a trail map page but it only reflects three trails being open. We’ll get you guys an update on that ASAP. Several people emailed us this AM that Ski Beech’s phone center is saying that they are not open. We checked that as well and the voice is Gil Adams reporting that they would not be open November 28th. THEY ARE OPEN with either three or four trails which gives them the most slopes open in North Carolina either way.

Give them a break as this is opening day and everyone has to find their link in the system and we’re sure they will get the kinks out. 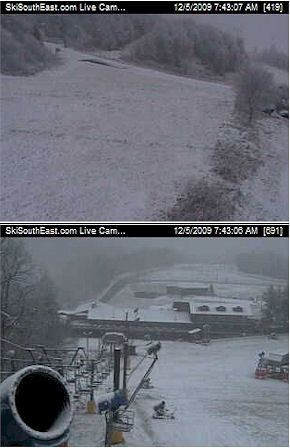 THE NEW TOWER CAMS AND MORE…

The new SkiSoutheast.com LIVE STREAMING tower cams at Beech and App are working fine, but we are not ready to display those on the site just yet. We are waiting until perhaps Monday to do that. We’re working out some tweaks to the programming that will allow us to show you some awesome shots! I logged in this AM and watched the snow falling. Seems like everytime we add a new webcam we get several days where you can’t really see much on it! That’s the case with both cams as it’s "snogged" in. The snow and low cloud cover has both cams almost not usable except for closeups! That’s okay, when the clouds go away we’ll have some awesome views!

www.HighCountryWebCams.com  is getting bombed this morning.

As far as we can tell there are as many as 20,000 people viewing at least one of the camera pages right now!

You guys like snow! We’re debuting a NEW High Country Web Cams next week so stay tuned for some new enhancements!

Brad Panovich forecasted 2-4" of snow for most of the ski areas today and overnight last night he emailed that his forecast was still "on". He prepared a nice snowcast map that we’ve made the photo of the day on the front page.

Here’s a quick tour of the state!

29° – Beech Mountain Resort – They open today for day skiing! Today marks the beginning of the 2009-2010 ski and snowboarding season for Beech Mountain Resort and it’s perfectly timed with 1" of snow thus far and snow is falling. That takes Beech to 4" of snow thus far on the season. They will be only for day skiing only today with 4 trails and 3 lifts which gives them the MOST TERRAIN open in the state of North Carolina today! Lifties are $30 for today all day and they are making snow. There will be a bit of thin cover here and there, but its opening day, snow is falling and they will be making tons of snow today so look for good, early season conditions improving over the next 24 hours!

32° – Cataloochee Ski Area – They saw one-half inch of snow this AM. Of course the snow just kicked up a notch so more is coming down. Cat will drop a trail today and operate from the mid station for day skiing only on Saturday and they will make snow as temps allow.  They have 3 trails open for day skiiing only.

31° – Appalachian Ski Mountain – They received their first measureable snowfall this morning, but they were not able to make as much snow as they’d hoped to on Friday or Friday night.

Ice Skating will begin on a regular schedule beginning Saturday, December 5 with 2-hour skating sessions starting at 12 Noon, 2:30 and 7pm. Ice skating is scheduled to be open Christmas Day on a normal schedule, but will be closed the night of Christmas Eve. The ice skating season is scheduled to last through Sunday, March 21.

30° – Hawksnest Tubing – It doesn’t appear that they are making snow although they have picked up an inch of snow so far. They JUST announced that they will not be open today or Sunday.

29° – Sugar Mountain – They will operate for day sking on the same two slopes and one lift for Saturday. Look for Sugar to get open to the top on Sunday. The ice rink is open as well and they have received 2" of snow thus far and are offering an all day adult ticket for $32.

30° – Wolf Laurel – 10:30am update: Shaun Lowery of Hendersonville who works on ski patrol at Wolf and had previously reported to us that Wolf was making snow last night and the word is that they plan to open December 12th!

Todd Mingus who lives at Wolf wrote, "Hello Mike, Unfortunately, Shaun is incorrect. We are close enough to see and hear what goes on at Wolf Ridge. The lights were out last night (even though it was 31 degrees) and as of this writing they have not started snowmaking operations.  We have 2" on the deck rails already at 28 degrees and it is coming down hard! I have no idea what they are waiting on and no one is answering the phone. I don’t even think anyone is there today. "

According to Accuweather the cold and snowy weather is just getting started. The storm that brings snow to the South and East Friday night and Saturday is just the beginning of a cold, stormy weather pattern that is likely to persist through at least the middle of December.  Woohoo!

Be sure to click over to www.SkiSoutheast.com to see who else had snow and how much! You can check the snow reports for all of the ski resorts of West Virginia, Virginia, Maryland, Tennessee and North Carolina via https://www.skisoutheast.com/skireports.php as well as videos, photos and more.