Snow is Falling Across the Entire Region. Up to 2″ so Far… 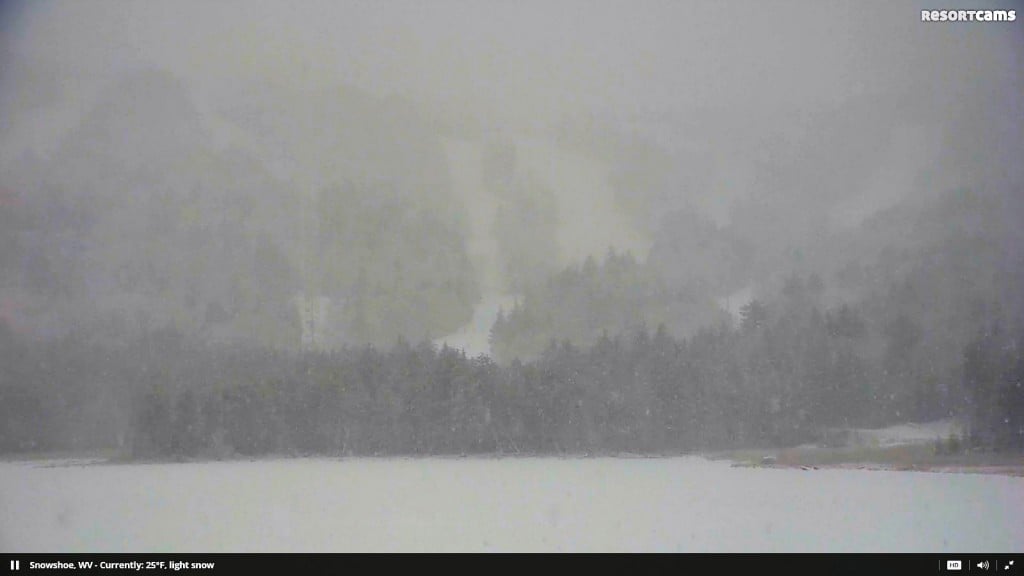 Simply checking all of the LIVE webcams this morning will show you some sweet snowfall happening at least as of 9:30am this morning. While most resorts were only reporting from a TRACE to an inch of new snow … the snow was intensifying especially around Snowshoe Mountain where as of 9:55am we saw the heaviest snow yet this season.

The most accumulated snow so far today was atop Sugar and Beech Mountain where about 2″ had fallen overnight. However as of this report, we’ve begun to see some sun popping through in the High Country and even over towards Cataloochee….while moderate to heavy snow is falling around Wintergreen Resort, Snowshoe and some of the Virginia and West Virginia areas.

Snow bands are pushing across the area so we’ll see some additional snowfall across our entire coverage area throughout the day. Only about 1-3″ is forecasted for even the most snow-prone areas, but this snow is certainly a delight for the MLK weekend skiers and snowboarders who made the trip up this weekend. 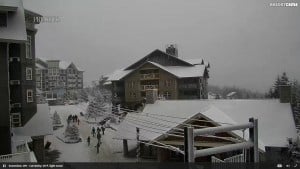 It was funny to see how HARD it was snowing at the basin area of Snowshoe and yet up top at the Village the snow was light.

All of the ResortCams links are getting bombed with traffic this morning…so you guys should check them out as well. See Ski Resort WebCams

On Saturday I received an number of updates from some weather gurus from around the region. One of those came from OpenSnow which is a national, snow-reporting service. I was most interested in the fact that all preseason long – and really up until this week – they have been forecasting 100-120% of normal snowfall for this season…even as we were experiencing “summer in December”. They have now updated all of the snowfall predictions and I was surprised to see that they are STILL predicting that most of our coverage area should see 75%-100% of normal snowfall.

Snowshoe Mountain has seen 21.5″ of snow on the season and to even approach 75% of their normal 180″ would mean that they would need to see 113″ of snow during the rest of January, February and March.

Beech Mountain has seen 6″ of snow against the normal of 80″ for a full season. OpenSnow is still predicting 75%-101% of normal. Assuming normal is 80″ then Beech will need another 74″ during these remaining 10-11 weeks of winter.

We can hope, right?

The cool news is that we’re in the midst of some of the coldest air of the season today through the next week and there’s more natural snow in the forecast for the entire area over these next 4-5 days. Some forecasters are showing 3-5″ of snow for Wednesday-Friday of this week atop Beech Mountain. You can add a couple of inches to the forecast for the West Virginia mountains.

I would STRONGLY recommend that you make reservations to come up today through this next week if you have the opportunity to go play at YOUR favorite ski area. Conditions are THE BEST of the season to date and they are only going to get better with cold, snowmaking and natural snow in the mix.

Beech Mountain Resort – 19° – 2″ of new snow and surprisingly Beech is not making snow. They have 12 of 15 slopes open, terrain park and snow tubing are open as well as ice skating. Visibility is low this morning and with some light snow that could be why Beech is holding off on snowmaking. View their Webcam

Sugar Mountain Resort – 20° – 2″ of new snow and snowmaking is ongoing as well. They are open with 12 of 21 slopes and snow tubing and ice skating open as well. Operating for day and night skiing. Fresh snow! View their Webcam!

Appalachian Ski Mountain – 26° and App made snow overnight but the snowguns are off this morning. They saw a TRACE to .6″ of snow and they are 100% open with all slopes, terrain parks and ice skating all open for day and night sessions! View their Webcam!

Canaan Valley Resort – 21° – Making Snow and a .6″ of new snow (about one-half inch). They have a winter wonderland ready for you to play at today with the ice rink open and 11 trails and snow tubing. Canaan is open for day sessions only today. Awesome conditions. View their Webcam!

Timberline Resort – 21° with another one-half inch of new snow. 17 trails are open with one being the longest ski trail in the region at 2 miles long! Timberline has groomed all of the trails and looking for a sweet day on the mountain.

Snowshoe Mountain – 17° with another ONE INCH of new snow. That’s 10″ in the last 10 days and now 21.5″ on the season. Snowshoe is boasting 125 acres of skiable terrain open with powder conditions. That’s 33 trails, including Cupp Run. Tubing and snowmobiling are open as well as night skiing and snowboarding on the Silvercreek side of the mountain. Snowshoe’s webcams are down this morning but once running check out: View their Basin Webcam!

Wintergreen Resort – 21° – Trace of new snow! – In fact as of 8:45am this morning we were seeing pretty moderate snowfall! 16 trails open with snow tubing and night skiing and snowboarding as well! View their Webcam!

Massanutten Resort – 28° and light snow is falling. Massanutten made some snow and they are open with 12 of 14 trails and snow tubing as well. If you haven’t checked out Massanutten’s snow tubing hill, you simply need to soon. It is one of the best around. View their Webcam!

Bryce Resort – 30° and no snowmaking. They have received a TRACE of new snow and they are 100% open for day sessions today. Snow tubing is open as well.

Ober Gatlinburg – 27° and light snow is falling. Snowmaking is ongoing as long as temps allow and Ober is open with 6 of 10 trails for day and night sessions. They also have snow tubing and ice skating all open. View their Webcam!

Wolf Ridge Resort – 26° with a TRACE of new snow and they have 13 of 15 trails open as well as terrain park, snow tubing and more! View their Webcam!

Sapphire Valley Resort – 30° – trace of snow with both slopes open and snow tubing open as well.

Cataloochee Ski Area – 27° – Trace of new snow and 100% open with all 18 slopes and trails. They are making snow and have snow tubing open as well.