Snow Fell Across the Mountains! See WHERE and When More Snow May Fall. 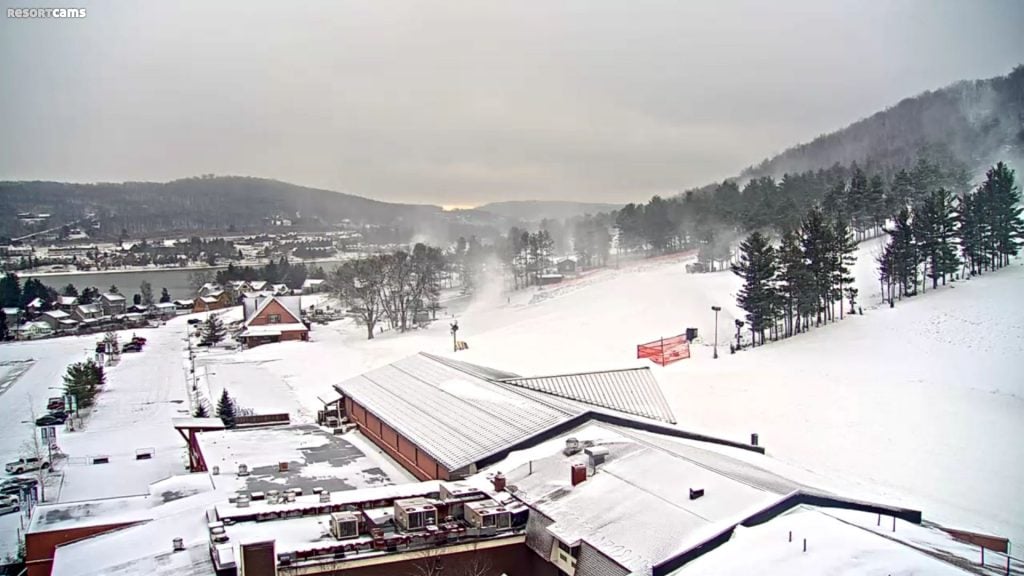 Check the SNOW REPORT for all of the details. We’ve included a few notables below but the news of the day is the extreme weather swings, COLD, some snow and more resort openings.

Tuesday was a crazy day for us as we received several calls from ski resort ops from around the region; we received numerous press releases and probably the coolest video of pushing snow around and preparing a slope for opening from Snowshoe. If you didn’t watch that video which IS posted to the front page, you can CLICK HERE and enjoy it. (By the way, Snowshoe Mountain opened Cupp Run today!

As I was touring the area for this FirsTrax Mountain Blog I witnessed temperature ranges from a low of 22° at Snowshoe Mountain to Ober Gatlinburg’s 41.1°. ALL of the ski resorts NOT located in the Smoky Mountains were seeing temps in the upper twenties to 30° or so and yet NONE of the ski resorts were making snow except WISP RESORT in Maryland’s Deep Creek Lake area. They were reporting 24° and a skiff of snow at 8am this morning and they were making snow across the face of the mountain.

They evidently were making snow most of the night as you can watch via the cool, timelapse video that our Kenny Griffin setup. CLICK HERE and then click on the TIMELAPSE ICON at the top right of the video player (you may have to put your mouse on the video player to see it). 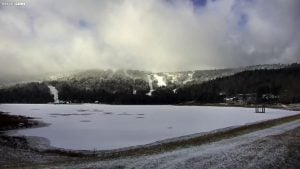 The FOG is lifting and Snowshoe Mountain IS making snow as of 9:45am this morning! Click to Enlarge!

By the way – by the time you guys read this report later in the day, things will be different and you’ll be seeing every resort making snow, however as of 8am this morning only Wisp was doing so. One look at all of the webcams this morning told the story of potentially WHY none of the rest were making snow despite the apparent cold temps. DENSE FOG was enveloping nearly every resort we looked at. That happens when the ground/surface temperature is the same as the air temp. That can produce some wacky, wet-bulb scenarios that prohibit resorts from making snow.

Add in the knowledge that temperatures will be PERFECT and OPTIMAL from later this evening all the way into sometime on Saturday – dictates why resorts were in a holding pattern.

EVERY RESORT WILL BE MAKING SNOW BY THE END OF TODAY as the next round of really cold, arctic air hits our mountains. Snowshoe Mountain, Canaan Valley and Wisp all reported from .7″-1″ of snow from overnight and that area could see some significant snowfall according to our Meteorologist Brad Panovich. We’re seeing lots of cold and chances for snow in West Virginia with a forecast HIGH at Snowshoe tomorrow of 6°!

The forecast for resorts into Virginia and North Carolina is PLENTY COLD for great snowmaking ops although perhaps 6-9° “milder” with highs apparently meant to be around 14° for a HIGH at Beech Mountain tomorrow.

The summary is that we will see several rounds of very cold temps with some wintry precip thrown in across the region and ski resorts will be able to lay down some deep snow across unopen terrain to get those open as we creep closer to the Christmas-to-New-Year week where resorts NEED to get everything open to ease heavy skier-visit traffic on the slopes.

A star-studded lineup of celebrities and music stars, brought together by Dolly Parton, helped raised millions of dollars Tuesday night  to support the victims of the Sevier County wildfires.

The ‘Smoky Mountains Rise’ telethon led to such a huge response that phone lines were overwhelmed and organizers had to add another two lines for people to call in on. (Additionally for the first 30 minutes of the concert, organizers were displaying the wrong number to call. Ouch!)

They got it all straightened out and Dolly did her thing. Although it was unclear just HOW MUCH was raised, Dolly reported late last night that “MILLIONS” had been raised for “her people”. Dolly and others shared that some 1300+ families had been displaced by the horrible wildfires. Reports are somewhat mixed about how many homes were destroyed and how many people lost everything, but according to most reports up to 400 homes were totally destroyed with those homeowners and renters losing everything. Dolly Parton has LONG supported the Gatlinburg and Pigeon Forge community with her time and certainly with her money.

Many stars donated and before I crashed for the evening I saw Kenny Chesnee give $250K and Taylor Swift donate $100K.

How much the evening raised remains a mystery, as of late Tuesday night but Dolly promised that the final tally would be revealed later today.

Gov. Bill Haslam and First Lady Crissy Haslam joined Dolly for the reveal of the donation total, but then she explained that they’re going going to wait to give that out because the telethon would be airing on the West Coast and phone lines would stay open until 3 a.m.

The check presentations featured throughout the broadcast totaled $2.1 million.

East Tennessee’s favorite daughter kicked off the emotional evening with her first of several performances, singing “My Tennessee Home.”

More than a dozen performances filled the three-hour show including Alabama, Hank Williams Jr., Cyndi Lauper, Reba McEntire, Chris Stapleton, and many others.

I urge all of our readers to join in this worthy drive for donations. “Millions” sounds like a lot of money and we expect to hear that perhaps $4M-$5M was raised (although it could certainly be higher). Dolly promised that 100% of your donations will go directly to these needy families and if you consider even $4,000,000 divided by 400 families who lost their homes and everything in it – you only come up with $10,000 for each family unit. That’s a GREAT help, but it’s certainly not going to bring these people totally back – if that is even possible. Obviously many more than 400+ people were affected so the need for assistance is there and while other organizations like the Red Cross have stepped in to help – it isn’t enough.

It’s Christmas and the time for giving. If you feel the urge to help and you have the resources to do so – give online at https://dollywoodfoundation.org/

As Dolly says, “I’ve always believed charity begins at home and that’s why I’ve asked my companies to help me establish a fund to assist the victims of the Great Smoky Mountain wildfires in Tennessee.”

Ober Gatlinburg and the community of Gatlinburg has always had a very special place in our hearts as I’ve traveled to the Smoky Mountains nearly every year since I was 10 years old. Ober is part of our family here at SkiSoutheast and we urge you to join us on spreading the message and the link to help those who need our help…here…close to home.

Again – check the SNOW REPORT for all of the openings and other information and email me as you feel the urge at: [email protected]