Snow and Cold Is In Our Immediate Future! 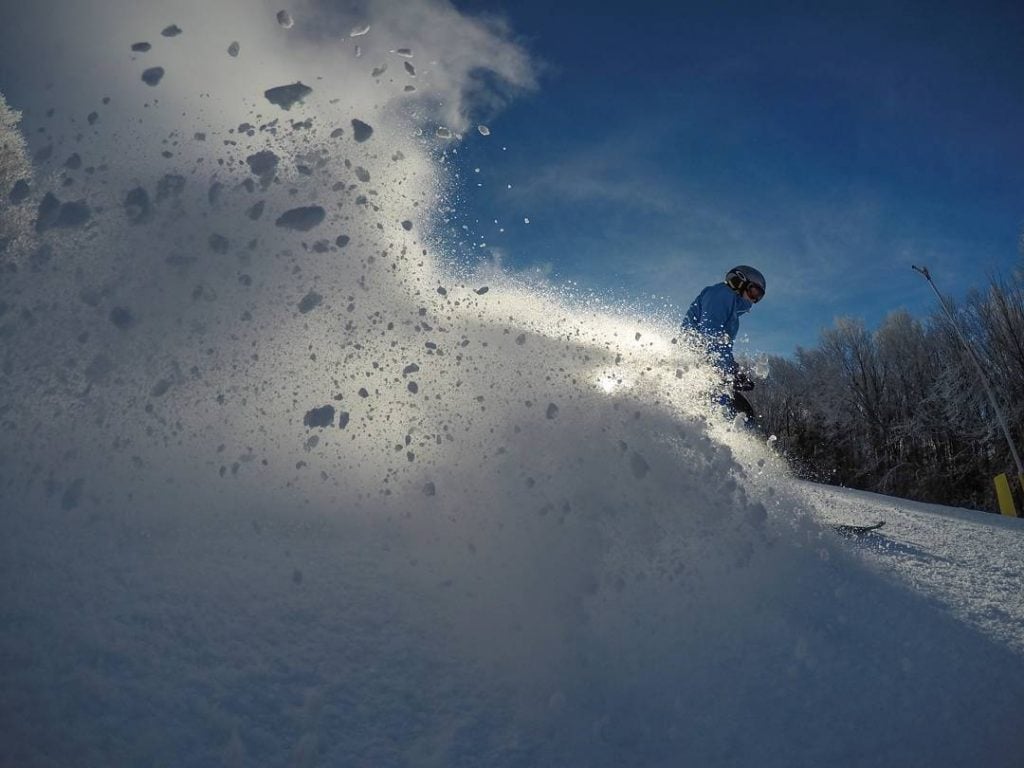 As mentioned yesterday morning, colder temperatures arrived during the day and overnight hours.  It is much colder this morning especially up into West Virginia where temperatures are downright chilly right now.  Snowshoe Mountain is the cold spot this AM has they are sitting at 10 degrees.  Brrrrr.

Several resorts resumed snowmaking as early as the late morning hours yesterday.  EVERYBODY is reporting as having made snow in the last 24 hours.  That’s right, every single ski area in the region made snow over the past day which is fantastic to see.  Here’s a video from Cataloochee yesterday evening.  I wish they would turn the camera sideways!

Don’t expect these snow guns to turn off anytime soon as we are looking at a majority of resorts being able to make snow around the clock into Tuesday of next week.  It’s going to be that cold for that long.  Wooo!  The only limitation to snowmaking will be the availability of water.  I suspect some resorts will make snow for so long that they might drain their snowmaking ponds.  It’s been a while since we had a window of snowmaking like this.

Beech Mountain continues to make snow this AM as evident on the Pinnacle Inn cam, which is back up and running!

There was also a brief period of light snow yesterday morning in northern West Virginia and at Wisp Resort in Maryland.  Snowshoe, Canaan, and Timberline all saw a dusting or so.  It was exciting to see but it didn’t last too long.  I think some people got a little too excited by it as I get an emailed snow report from one resort where they said it was supposed to snow 1-3″ throughout the day.  I had to do a double take as I looked at the NWS forecast where it called for little or no snow accumulation.  Regardless, a little dusting is better than nothing.

And several inches is much better than a dusting, which is what the ski areas are about to see.  I’ll go into a little more detail right after Brad Panovich’s latest video forecast.

First things first, way to rub it in our faces that you’re going out west Brad.  Thanks!  I’m not jealous or anything at all.

We’re looking at two separate events over the next 2-3 days.  The first of which is a quick moving disturbance today and tonight.  This one will mainly benefit the West Virginia resorts and Wisp in Maryland.  Brad mentioned 6 inches for up there with this event and that is pretty spot on with what the current National Weather Service forecast is.  Below is the current forecast for WV and Maryland through midday tomorrow.  With my fancy art skills I have circled the approximate location of the ski areas. 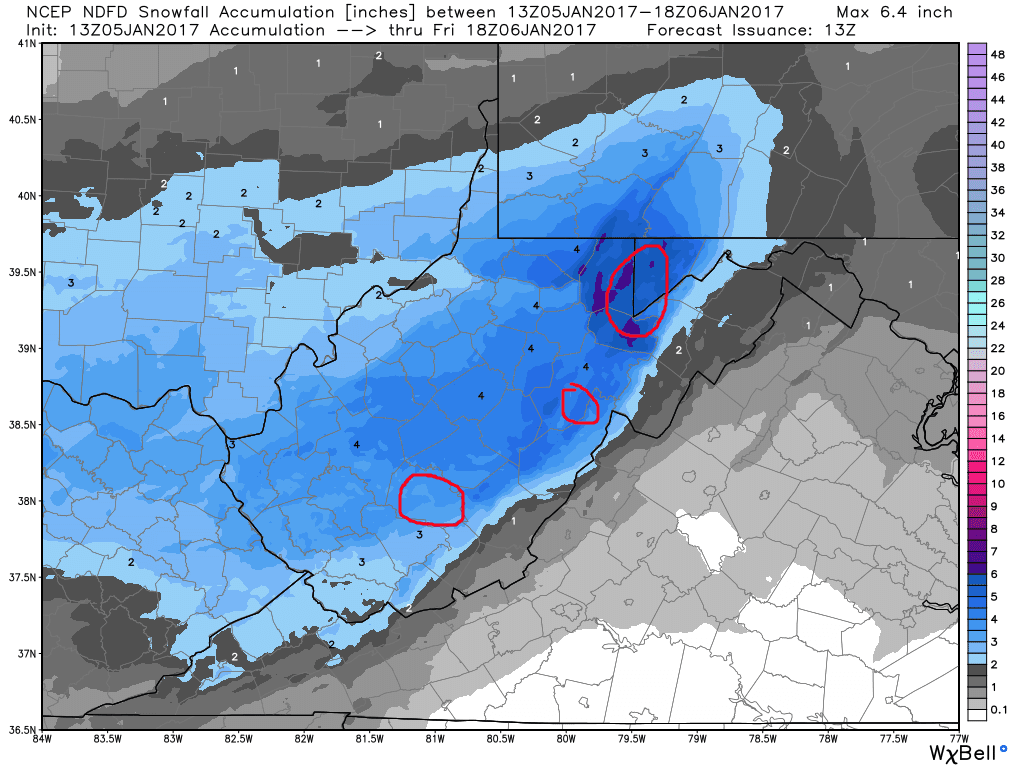 Anywhere from 4-6+ inches for Canaan, Snowshoe, Wisp, and Timberline should make for a great little mini powder day tomorrow.  We might see some spillover into the Virginia resorts which would be nice to see since they get shafted a lot of the time being in the snow shadow and what not.

Some of the North Carolina resorts will see a little snow tonight but the main event for them arrives Friday evening and into Saturday.  Weirdly enough, the heaviest of snow is going to fall outside of the mountains as it looks like the system is going to track just a little too far to the south and east to really make for a good snow event in the NC mountains.  It’s time to buy stock in bread and milk if you can.  Lots of french toast is about to be made.

Raleigh, North Carolina might actually see more snow than Beech and Sugar Mountain.  What’s even weirder to think about, by this time on Sunday it is possible that there are areas in eastern North Carolina that might have more snowfall for the season than Boone, NC.  In January.  CRAZY.

That said, 2-4″ of snow is the general forecast for the NC ski areas right now through Saturday and I don’t think anybody is complaining about that.  Here is the NWS forecast.  I have circled the approximate axis of ski areas. 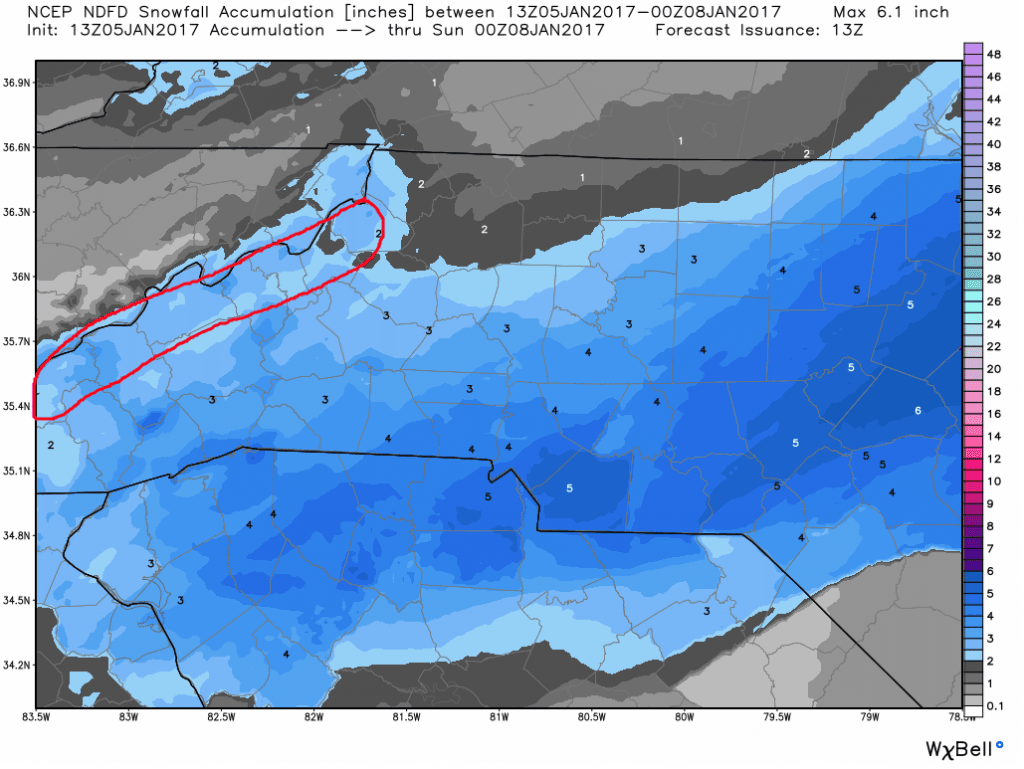 We are snow starved this season so this snow is going to delight many.  Right now, it looks like every ski area will see at least a little bit of snow.  And as Brad mentioned in his video, with temperatures being so cold all of the snow that does fall will be of high quality.  That means it will be nice and powdery with snow to liquid ratios of 15/20 to 1.  We call that champagne powder.  You can pick up a pile of it and just blow it all away.

Combine the natural snow with the continuous snowmaking and you have one good looking weekend ahead of us.  Maybe even the best weekend of the season thus far?  Probably!  I can guarantee you that it will definitely, definitely be the best weekend of 2017 so far.  Whatever you want to call it, Saturday and Sunday look superb and I highly suggest making plans to get some skiing or snowboarding in.  It’s going to be a good one!

Previous Post
Snow in the Southeast Plus Arctic Air Blasting In!
Next Post
Lots of Snow and Cold to End the Work Week!