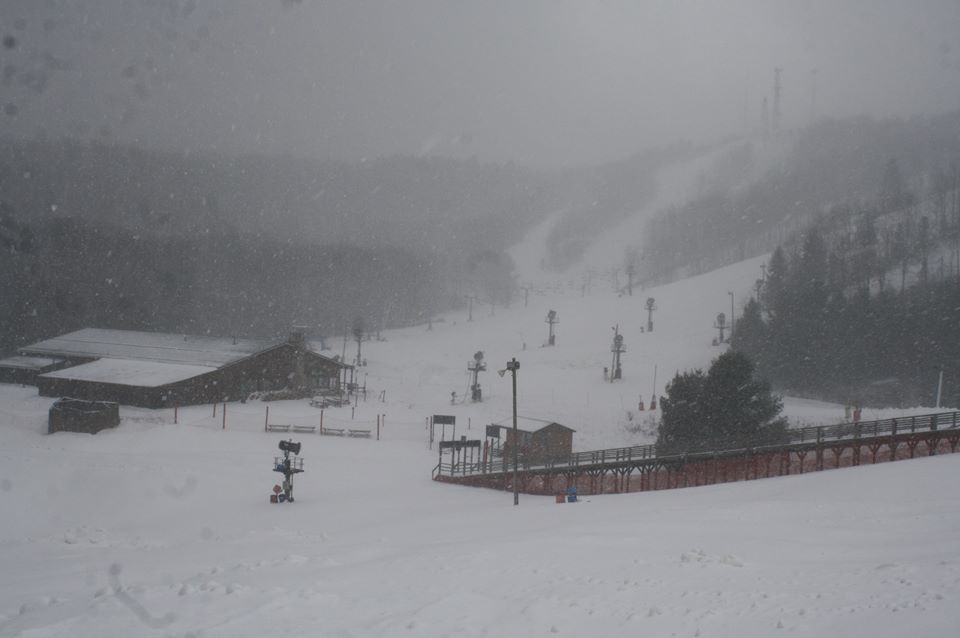 I believe this is the coldest morning of the season thus far.  Temperatures at the ski areas are in the single digits and teens and the wind is making it feel even worse.  Gusts of 40+ miles per hour has wind chills in the negatives for a few spots.  It’s BRISK to say the least.  I was just watching our Pinnacle Inn cam atop Beech and it was shaking like crazy due to the wind.  The weather station atop Beech Mountain (shown below) shows wind gusts of 43 right now so I guess that explains why.  Also, the temperature was 3 degrees and the wind chill was -22 this morning!  Wowza! 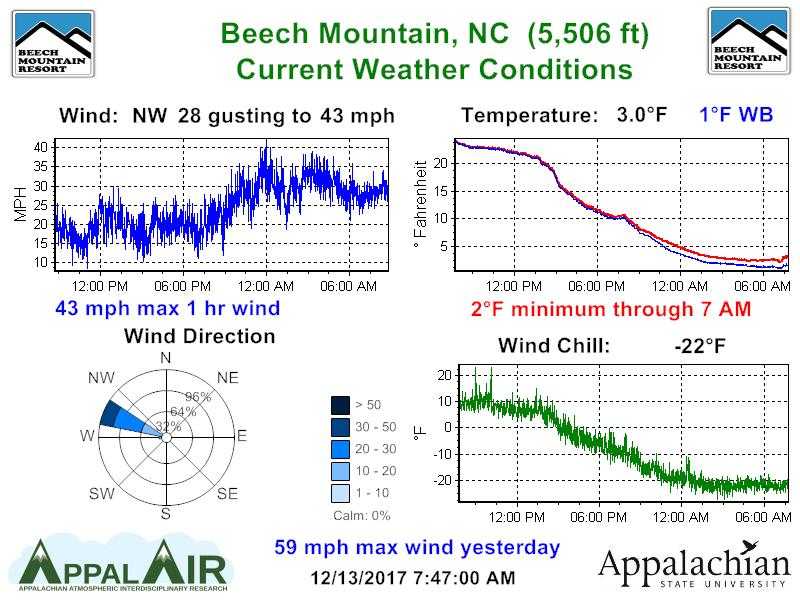 The overnight snow didn’t quite pan out for the North Carolina resorts.  It looks like Beech, Sugar, and App only saw a trace so the forecasted 1-3″ totals were a little ambitious.  However, up in West Virginia and at Wisp in Maryland the forecast was spot on as those ski areas saw 3-6″.  Here are the totals… 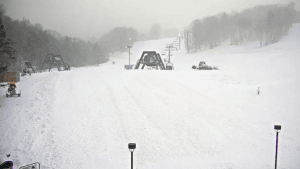 It was still snowing at Canaan this morning.

Unfortunately, the only place where you can take advantage of that snow today is at Snowshoe.  The four other resorts do not open up until this weekend but they will be able to stockpile it and add it to their already impressive bases.

Yesterday, Brad Panovich mentioned the fact that this snow would be nice and fluffy due to lower water ratios.  That indeed is the case as the 5.6″ of snow that fell up at Canaan and Timberline only contained 0.32″ of water.  Some quick math reveals a 17.5 to 1 ratio.  That’s good.  That’s real good!

Another quick moving system is slated to dump 1-3″ of snow for those same resorts tonight.  It doesn’t look like we’ll get to those double digit numbers that I mentioned yesterday, but we’ll get pretty close.  Factor in the ridiculous amount of snowmaking that has been going on and we all have nothing to complain about.

Speaking of snowmaking, it’s another morning where literally every single resort is making snow.  It makes me very happy when I get to toggle the snowmaking option on “Yes” for each ski area when I do the morning report.  The last week has featured some amazing snowmaking and this morning is no different.  Minus the wind, these are prime snowmaking conditions right now and that is evident on the webcams.  Every ski area looks so good right now.  A lot of ski areas have snow all over the mountain, not just on the slopes.  The recent snow has stuck around thanks to the continued cold and it really is just a beautiful sight in the Southern Appalachians right now.

It’s been a long while since we’ve had conditions like this in December.  Snowshoe even noted on their morning report that by the weekend “It will be the most open terrain we’ve had by mid-December in over a decade!”.  Excellent.  Snowshoe posted a sweet aerial video yesterday showing the snowmaking progress.

We’re only a few days from the weekend now and we have some definitive opening dates for the remaining ski areas who haven’t done so yet.  App, Beech, Cat, Sugar, Wolf Ridge, Ober Gatlinburg, and Snowshoe all remain open for business but I wanted to highlight the other ski areas who open this weekend so you can you make your plans now!

Canaan Valley Resort:  They open on Friday and plan on skiing and riding on 10 trails (2 from the top).  Tubing and ice skating will also be open.  Some of the pictures that have come out of there over the last few days have been rather impressive.

Timberline: Canaan’s neighbor also opens on Friday.  Here’s what they plan on offering…

Opening Friday is the base area, Woods Hole, White Out, Timberline Trail from mid-station to White Out and the Teaching Area. On or by Christmas Week we will have Salamander, White Lightning, Lower White Lightning and Lower White Out. Then, the focus is bringing out Dew Drop, Winterset and Lower Almost Heaven. Followed by Upper Dew Drop, Lower Thunder, Lower Heaven and Upper Twister.

Winterplace: The most accessible ski area I’ve ever been to opens Friday.  They plan on having at least 14 trails and 4 lifts open with something for everyone from beginner to expert.  Tubing will open on Saturday.

Sapphire Valley:  The lone remaining North Carolina ski area left to open will do so on Saturday.  As they say on their site, “Best conditions in years will greet skiers this Saturday!”.

Bryce Resort: The Virginia ski area will be opening on Saturday.  From their site…

The lift will open its gates beginning at 9:00 a.m. to take skiers to the top for the first run of the winter season. Horst Locher Snowsports School will also kick off winter with First Time Packages, Kinder School and Private Lessons for those new to all things winter. Snowsports School features something for all ages.

Not sure about skiing down the mountain? We offer three 800-foot snow tubing lanes packed with adrenaline – no skill required. Each tubing session lasts one hour and 45 minutes.

Massanutten: The Nut will open on Friday and be open for day sessions only for the time being.  No word yet on what trails will be open, but based on the recent photo below I’d say they will have plenty. 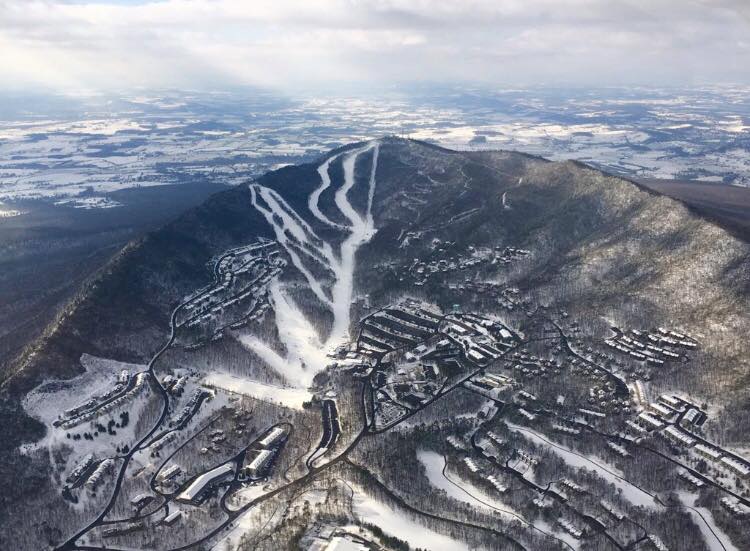 Massanutten lookin’ good from the air!

Wintergreen: Like Massanutten, they too will open on Friday.  Projected opening trails will be Upper Dobie, Lower Dobie, Potato Patch, Progression Park, Upper Cross Trail, Lower Cross Trail, Eagles Swoop.  Tubing may open as well but that is not a sure thing right now.  Here’s a nice aerial video they posted yesterday showing how things look.  Man, the ski areas are all about the drones now.  I like it.

Wisp Resort: The lone Maryland ski area announced yesterday that after 151 hours of snowmaking they will open this Friday.

Welp, better start making your weekend plans now.  We’ll have 15 open ski areas and some of the best December conditions in recent memory.  Is it Friday yet?