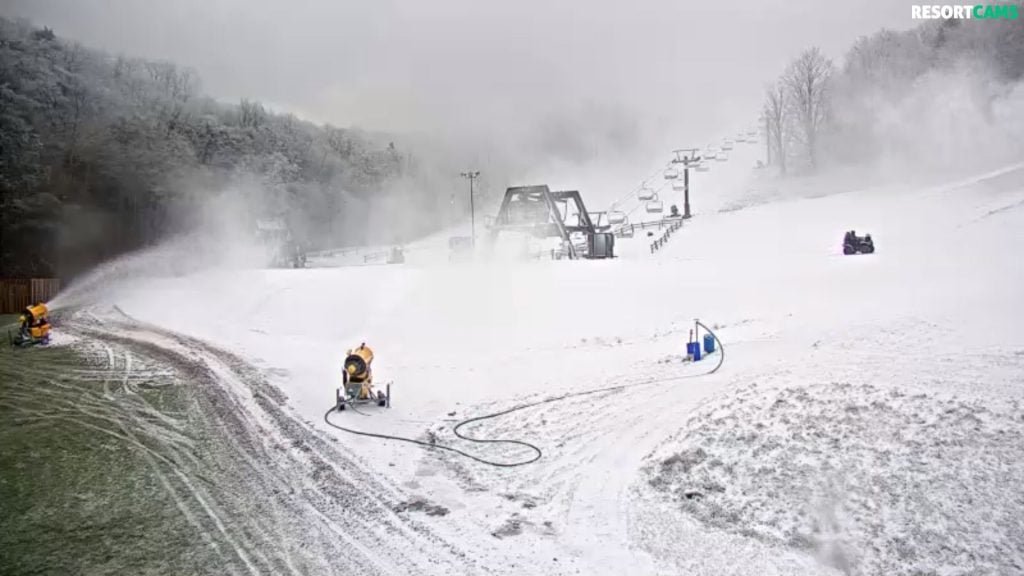 (The photo above is not the best quality, but we wanted to feature that Canaan Valley IS making snow this morning!)

It’s plenty cold enough to make snow at Wisp, Wintergreen, The Homestead, and Winterplace and yet there is nothing happening.

On the other hand, temperatures are in the 34° range in most of the North Carolina and Tennessee ski mountains and understandably no snowmaking is happening just yet…except that Sugar Mountain IS MAKING SOMETHING. There IS something magical about that place as Gunther’s team will crank up those snowmaking machines at temperatures above what any other ski area will. 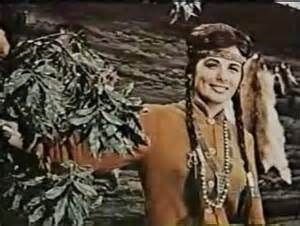 I’m going to show my age again this morning, but as I was “touching” each ski area virtually this morning and getting the eerie feeling that nobody was “out there”, I was reminded about an old television show in Charleston, South Carolina (where I grew up). The show was called “Happy Raine” and it featured a beautiful woman dressed up like an indian princess – who used to look in her magical mirror and talk to viewers of the show. She would occasionally tap on the television monitor (camera) as if to see if anyone was paying attention.

I felt something similar as I checked in at each ski area. I DO have news to share but to give you an idea of what I’m alluding to:

Timberline Resort – has not updated anything on their website, YouTube Channel, Facebook (except for a share of our David Lesher story October 26th). There’s no update on whether they will be opening this season or not.

Wintergreen Resort is strangely quiet and not making snow as early as they have in recent seasons.

Wolf Ridge Resort – while they have a new website, nothing has been posted to it since early October.

It’s early yet and some ski areas could be simply waiting to see what kind of ice or ice/mix comes from this system and then look for the next window of opportunity to begin making snow in earnest.

Okay, YOU GUYS ARE OUT THERE! THANKS!

As I was looking around and getting that eerie feeling of “the lights are on, but nobody is home”, I decided to check in on our analytics to see what IS happening. Whew! You guys are paying attention!

Yesterday we saw 15,600+ visitor sessions, which is p-r-e-t-t-y darn great for November 13th, with only ONE ski area operating and nothing much else going on.

Thank you guys for that.

WHAT’S HAPPENING WITH THIS WEATHER SYSTEM?

As reported recently, we’ve been getting more than the usual bursts of cold and moisture for this early in November. Snowshoe Mountain has already registered 6″ of natural snow via their official, NWS weather station. They are not reporting that just yet, as they usually only report snow once their season begins. Canaan Valley has seen 3.8″; Beech has already seen 1″ of snow.

So we’re off to a good start in terms of the kind of weather pattern we will want to see all season long. If we can get the cold air and moisture at the same time…awesome.

The weather that is coming in this afternoon and over the next couple of days DOES look challenging…and more about ice and wintry mix, than snow. But we’ll see.

A deep low pressure system moving east from the plains states
will send abundant moisture into the region atop a wedge of
surface-based cold air tonight. This setup will be favorable for
not only heavy precipitation, but also the development of freezing
rain and sleet – especially over the central and northern Blue
Ridge mountains and the adjacent foothills. Heavy accumulations of
freezing rain and sleet could lead to power outages and hazardous
travel conditions.

* ADDITIONAL DETAILS…Power outages and tree damage are likely
due to the ice. Travel could be nearly impossible. The
hazardous conditions could impact the morning commute.

The temps for the next few days…

Snowshoe and WV
Temps about the same with Wintry Mix tonight and Thursday with chances of 1-2″ of snow.

17° at Snowshoe and they are making snow. They also had a TRACE of natural snow and they look ready for their opening day, November 21st (one week from today!)

37° at Appalachian Ski Mountain and unfortunately they have postponed their opening. They reported:

Unfortunately, due to heavy rains after our concentrated snowmaking effort and a very moderated forecast for the remainder of the week, Appalachian Ski Mtn. will not be able to open for the 2018-19 season as planned on Friday, November 16. We are scrutinizing the forecast and will be continuing to make snow anytime temperatures allow. Please check back for future Opening Day updates as they will be posted as this information becomes available. Think Snow!

Our Alpine Ski Shop will be open this Saturday, Nov. 17 from 9am-5pm and Sunday, Nov. 18 from Noon-5pm
36° at Cataloochee, no snowmaking
36° at Bryce Resort, no snowmaking

18° at Canaan Valley Resort and another .2″ of snow and they are making snow. See photo header!

18° at Timberline Resort and as mentioned earlier…there’s nothing happening there just yet.

32° Massanutten Resort, not making snow
31° Ober Gatlinburg and fogged in. No snowmaking yet this morning.
26° Omni Homestead not yet making snow

Wisp Resort DID make snow this past Saturday and posted this:

Snowmaking Begins
Here we are on November 10, 2018 and the snowguns are ON! The snowguns on the front side roared to life shortly before 9am this morning. Temps are hanging in the low to mid 20s and we’ll keep those guns blazing for a while. With no exact opening day currently set, our Mountain Operations Team is watching the forecast and looking for a prolonged window to lay down a solid base.

43° Sapphire Valley – tested the snow making system 11.11.2018 and seem to be shooting for a target date of December 16th to open…but they don’t rule out opening for Thanksgiving, next week.

34° no snowmaking at Wolf. No word since October.

33° Sugar Mountain is making something and open with 5 trails today.

We ARE seeing a pretty cool pattern of cold and moisture and it’s only mid-November.

If you want to drop me an email or comment, feel free.

[final-thoughts]
Previous Post
Rain, Rain, Go Away…Waiting for the Cold Front to Come in…
Next Post
Blowing Rock WebCam is Back!