Snow and Snowmaking Have Started Back Up 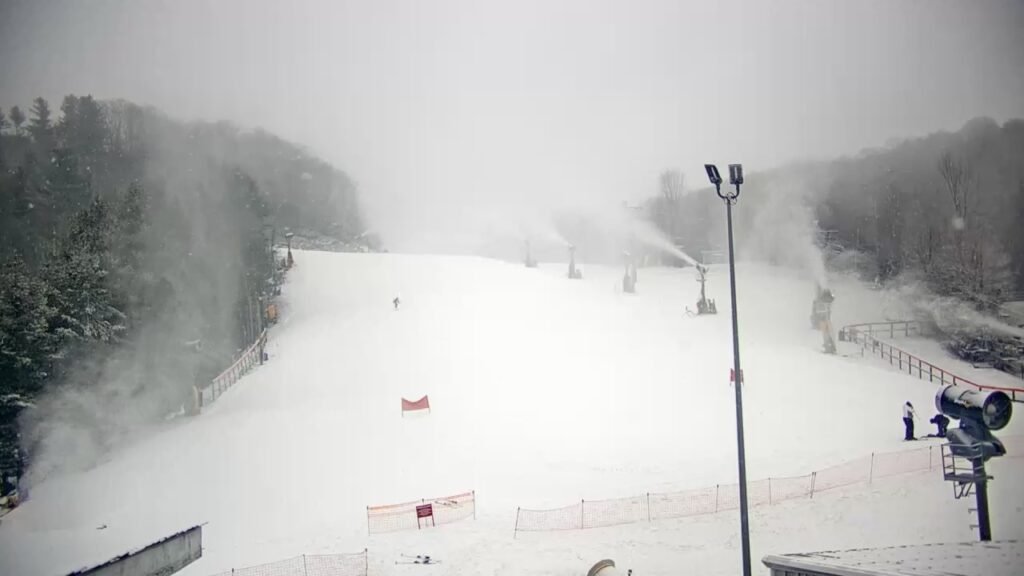 The flakes have started to fly this morning.

We are seeing the snow starting to fall in the southern part of the region, while snowmaking is ongoing at several resorts this morning.

Local Yokel Weather – who does a great job forecasting in the southwestern part of North Carolina – shared a great capture of the Cataloochee mountain ops crew grooming for the day while the snow was falling.

Talk about a great start to the day.

The big news of the day is the natural snow forecasted to fall across the North Carolina resorts and Ober Gatlinburg in Tennessee. Forecasts seem to have the resorts getting 2-4”, but with the right scenario could see around six inches or so.

I might make a last-minute change tomorrow morning, but this is pretty much my last call. Worried about mixing reducing totals but the bust potential covers that possibilities. Rain early to snow by mid-day to early afternoon in most locations. #snOMG #cltwx #ncwx #scwx pic.twitter.com/8OVFaYbUBI

That boom scenario looks really good to me.

This has been a tricky system to forecast as there are a ton of factors at play so we will definitely keep an eye on those totals as we get into nowcasting mode.

Not to be completely left out, the northern resorts – especially the Virginia resorts and Winterplace – may also get an inch or so today which will be a nice way to start the weekend.

However, everyone will be in the snowmaking window today that could last into the weekend.

Things are going to be fan-freaking-tastic on the slopes today and into the weekend. Check out the full report over on the Snow Reports page.

Here is a quick snapshot of where we stand this morning.

North Carolina
App Ski Mountain – Playing at 100% open today with 12 open slopes and five lifts turning. Currently, they have a groomed surface with a 36-42” base.

Beech Mountain – Beech is offering 12 open trails with five lifts in operation today. They are making snow and currently have a 36-64” base with a groomed surface.

Cataloochee- The snow has started to fall in Maggie Valley this morning. Cataloochee is playing on 16 trails with five lifts open. They have a groomed surface on a 33-63” base.

Sugar Mountain – Sugar got a bit of jump start on snowmaking as they were able to get cranked up yesterday afternoon. They are playing on a 41-85” base with a powder (both manmade and natural) and frozen granular surface. Currently, they are offering 13 slopes with five lifts.

Wolf Ridge – The Wolf has an 18-40” base with a groomed surface. They are riding on seven slopes with three lifts in service. Light snow was falling this morning.

West Virginia
Canaan Valley – Snowmaking has freshened things up in Davis as they are playing on 24 slopes with all four lifts in operation. They have a frozen granular and groomed surface and are reporting a 15-30” base.

Snowshoe – Snowshoe continues to offer the most available terrain in the region as they have 52 trails on 192 acres open for play. They have 12 lifts servicing the mountain and will be making snow throughout the day. They have a 40” base with a groomed surface.

Winterplace – With a 24-40” base, Winterplace is playing on a groomed and granular surface. They are offering 16 runs with six lifts in operation.

Virginia
Bryce Resort – Bryce is rocking a 100% open rate this morning as they have all eight trails open. They have a 30” base with groomed conditions. It doesn’t appear they have started making snow this morning, but look for them to start as soon as possible.

Massanutten – Massanutten has a 28” base with a groomed surface. They are offering nine trails with six lifts in operation.

Omni Homestead – Things are cranking back up for the weekend in Hot Springs. Homestead is opening up with three trails and two lifts today, and they are playing on 18-22” base with a groomed surface. Tubing is open, but mini snowmobiles are not available today.

Wintergreen – With a 28” base and groomed surface, Wintergreen is playing on 15 slopes with four lifts in operation. They have closed around six trails for today for snowmaking, but those will be back open tomorrow.

Tennessee
Ober Gatlinburg – Ober’s rally in the second half of the season has been incredible. They are playing on six trails with three lifts in operation. They currently have a 20-36” base with a groomed and granular surface. Of note, Spring Fling has been moved up to this weekend – which will be a great event!

Maryland
Wisp – The McHenry resort is playing on a 28” base with a groomed and frozen granular surface. They have 24 trails with eight lifts open and are making snow this morning.

It is going to be a day of changing conditions so be alert on the slopes today.

If you are able to get out and enjoy the snow, be sure to send us photos and trip reports over on social media – we would love to see them!