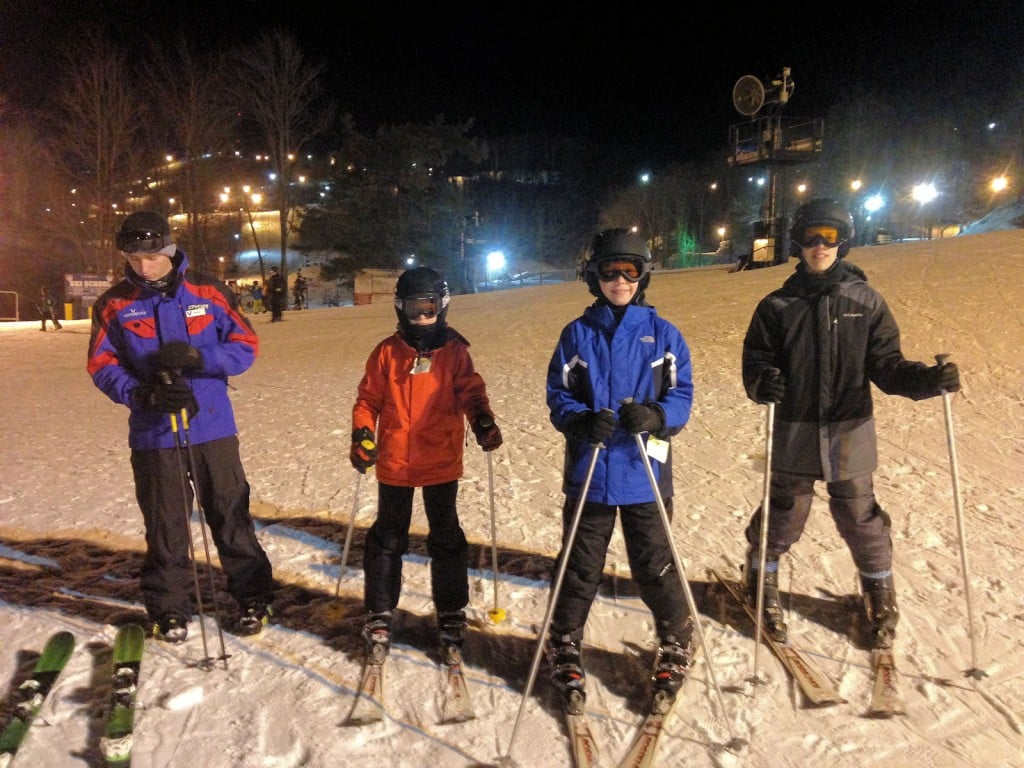 First the story about the veteran, me. In September of 2014, I had my left hip replaced after succumbing to an ailment that my doctor described as one of the worse he had ever seen and have a patient still walking without assistance.  By the way I was still running, competing in a five-miler just ten days prior to my first examination. As my wife will be the first to tell you, sometimes I am not the smartest person around, just one of the most stubborn.

When the 2014-15 season began I was only three months into my recovery from the operation and really didn’t think snowboarding, which I love, and which should have been high on my activity agenda. I did start to run though on a limited basis, please refer to the stubborn description above, trying to strengthen the affected muscles.

My snowboard was leaning in the corner of our garage, not being used since being on the slopes at Snowshoe with Mike Doble in January 2014.  On that day, I could not reach forward and strap in my bindings and knew right then and there, the time had come to do something about my health.  It just took me nine-months to really do something about it – remember the stubborn thing as it is just a trait that’s tough to break.

Now let’s get back to Friday, January 29, it was a day that Christian was scheduled for his first school ski club trip, making it his first time strapping on skis and letting gravity be his friend.  The ski club was headed to Winterplace Ski Resort in Ghent, West Virginia and one of my longtime friends in the recreational industry Tom Wagner is the Executive Vice President for the resort and has been a listening post for my recovery from the surgery.  Both Tom and I decided that the day would be perfect for me to once again strap on my board and see if the hip will hold up to some downhill fun and the watch my son make his first turns on skis.

Before heading to Winterplace, I found myself not for sure what to pack for the day on the slopes.  This got me thinking, if I am having problems, remember I have been doing this for over 30 years, what goes through the minds of a first timer, who might be seeing snow for the first time ever. I think I checked the forecasted temperature at Winterplace five or six times, trying to decided how many layers (at least I remembered that part of the deal), I should put on my body.  With temperatures in the mid-20’s expected, I made my choices and headed on the interstate to the West Virginia ski resort.

After arriving at Winterplace and catching up with Tom, it was go time. I have to admit stepping into my boots was almost like doing it for the first time, with the thought going through my head “now how do you do this?”  Again, if I had questions or concerns, what the heck is going through the head of that first timer. After getting everything arranged and with my lift ticket correctly fastened (more of that in moment), it was time to head to the slopes with my mountain guide for the day. 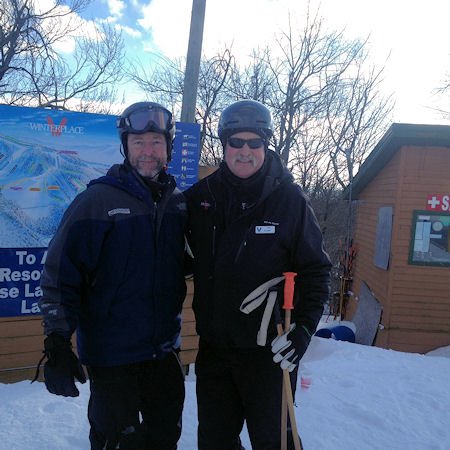 We took a moment to pose at the top of the mountain. That’s me on the left with my buddy Tom Wagner of Winterplace Resort on the right.

Remember it had been over two-years since the last time I pointed my board downhill and said, “let’s go.”  Tom was nice enough to take to a slope that as it turns out that my son made his first true turns on later that evening. Ironic, huh? Tom looked at me and stated, “it’s just riding a bicycle,” at least he didn’t say, “it tastes like chicken.”  You know what, he was right, after making sure the balance thing was happening, the first turn was followed by the second turn and away we went.  I was given a tour with Tom making sure that with each new slope we were pushing the envelope just a little bit more.  Well 90-minutes later, I basically didn’t want to press my luck, knowing soreness was going to follow, remember the old thing and everything.  Also my son was going to be arriving in about an hour or so for his first time getting a lift ticket, standing in a rental line and making his way to his first ever lesson. Now back to my experience, I can sum it up by saying “I’m back!”

I have been asked why Christian hadn’t been skiing before this year, with me being involved as I am in the industry.  No excuse other than, it just hadn’t work out, even with five or six of my friends in the industry offering their time to teach him how to have fun on the slopes. A number of the school’s trip chaperons showed up prior to the buses getting to the resort and one described the on-coming situation as “controlled chaos.” Wow, was he ever correct.

On this trip there were thirty-eight, count them, thirty-eight never ever skiers.  When I was informed of that, I remembered that January was “Learn to Ski and Snowboard Month,” so why the heck not?  After the kids’ arrival and helping all of them get the lift ticket, ski rental, helmet and locker scenario taken care of, it was time for that first lesson.

Don’t forget the thirty-eight never evers situation and with that said, the teaching staff of Winterplace was ready for the task.  By the way, whenever a middle school ski club has a night on the slopes at Winterplace, every one of the kids have to take a 90-minute lesson. Again, even if they know how to ski or snowboard, they still have to take a 90-minute refresher. That may I say, makes this parent very happy.

I, along with other parents, helped their kids who were skiing for the first time make their way to the lesson lineup.  Christian’s toughest thing so far was walking in his ski boots and carrying skis and poles up the steps.  A little frustration set in at that point, but we got through it.  That was a reality check for yours truly, because after 30-years I take things like that for granted.

So Christian and his two other first time skier buds, Logan and Jake shoved off to the learning area at Winterplace to give it a go.  As I sat patiently (somewhat) for 90-minutes, I headed out to the learning area with Tom to see how things went.  Well I was basically greeted with a “why are you here dad look” but wasn’t turned down when I asked if I could help him with his equipment.  So far so good I said to myself and with some additional assurance from Tom, I felt like we were on our way.

Reaching back into my memory of my first time on the slopes, I remembered that having another lesson right after my first one helped tremendously and that’s what Christian, Logan and Jake received, some one on one teaching after the initial never ever class.  I have to admit, there was some “we just want to ski on our own” comments but with some friendly parental persuasion, the boys went out again with ski instructor Michael, a high schooler from Blacksburg, Virginia to fine tune their newly found skills of having fun in the snow.

This time the class was an hour in length and we were greeted by three great big smiles and lots and lots of tales when the three young skiers arrived back at the lodge.  After some quick eats, the stories continued and the smiles never left their faces.  Look out world, we have three new skiers, who can’t wait for the next trip.

None of the boys took the school bus back home, riding back instead with us parents and after about 20 or so more minutes of stories and smiles, the eyes were shut and exhaustion took over.  Thank you Winterplace for the learning experience, not only for the veteran, but also the rookie.  The memory will never be forgotten.

Previous Post
A Young Davis, West Virginia Couple Could Use Your Help
Next Post
The Beginning of February Looks Kind of Meh