In a first ever move we decided to test the limits of providing video coverage on the website by filming all three-plu hours of the Shred for the Cup Big Air event at Appalachian Ski Mountain on Sunday. After deleting the in-between jumps "dead space" we ended up with over an hour of coverage which shows every rider from the intermediates to the advanced.

There were some amazing tricks put down on the hill and Sunday and we’ve covered every single one, including the crashes, etc.

Editor’s Note: On Monday we accidentally posted a link in our main story that didn’t work properly. That is now working so view on! 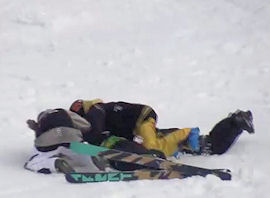 <Fellow competitors celebrate with Berkley Wilcox after "stomping the landing" and winning on Sunday!

First of all there were skier and snowboarder divisions. There were beginner, intermediate and advanced divisions. In some cases there were divisions for women. However, the big winner of the day was unquestionably Berkley Wilcox. The Watauga High School Senior not only won the advanced skier competition, he won the biggest and loudest roar from the crowd and the biggest celebration from his peers after his last jump of the day.

Each rider in the advanced skier and snowboarder divisions were given a few warmup jumps and then three jumps within the official competition itself. It was pretty safe to say that Wilcox had the competition already sewn up after his first two tricks, however just prior to his third and final jump, "JP" Pardy of Recess, who was co-announcing the event stated, "Dropping in is Berkley Wilcox. Berkley has the chance to take the podium with a well stomped trick."

It’s unknown whether Wilcox heard the announcement or whether it would have made any difference because Wilcox pulled off the trick of the competition as he aggressively took on the hill and landed the first ever, double rodeo, flip, retard something or other in the state of North Carolina – coming in switch, which was some kind of crazy double flip maneuver that defys both gravity and a sane person’s thought to try it!

Upon landing the trick the PA announcer pretty much anoited Wilcox the winner by saying, "We’ll wait for the awards ceremony to announce the winner but in our hearts and in our minds I think we have a number one."

EDITOR’S NOTE:
For those of you who missed the event (parents, friends, grandparents and local trick enthusiasts) we filmed the entire three hours and condensed it to 1:08 (over an hour) of video and you can sit back, watch and enjoy the entire show at www.SkiSoutheast.com/videos

Berkley’s winning trick is at the 53:40 mark of the video!

The competition was well ran by the Recess crew, the ATP Park Crew and Appalachian Ski Mountain. Ski patrol was in attendance to help keep the crowds back and there was quite a crowd spectating.

Here are the winners (Forgive a few inaccurate spellings. If you know the proper names, let us know!) 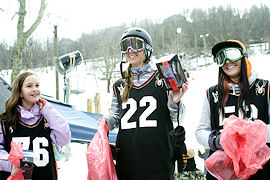 (A little preferrential treatment was given to this photo as Emma B is one of my soccer ladies.) 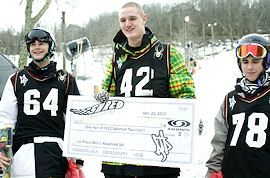 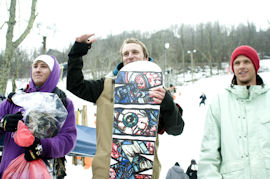 Previous Post
THANKS FOR PITCHING IN!
Next Post
Berkley Wilcox Wins the Shred for the Cup Big Air Skier Competition at Appalachian Ski Mountain