Ski Resorts are Holding Their Own and Open for this Weekend! 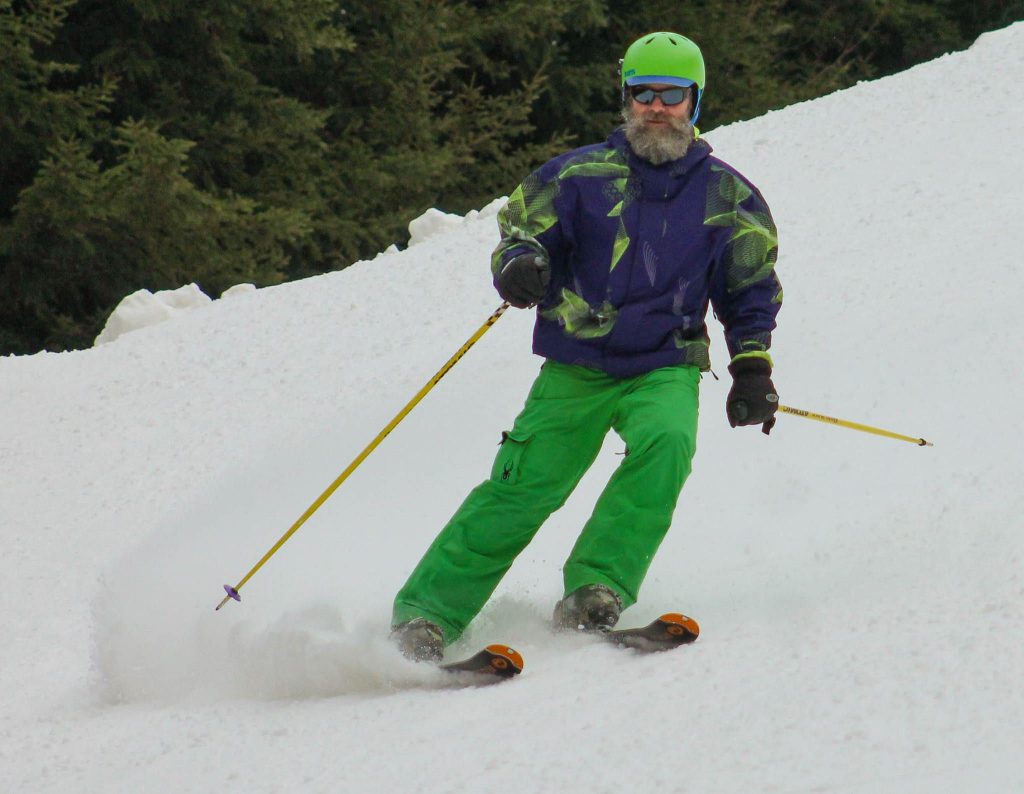 I am updating the FirsTrax report this morning from crazy, strange and wonderfully eclectic Asheville, North Carolina. I’m in town with my youngest daughter who is taking the SATs over here today. We got into town last night and went into the always exciting downtown area for a nice dinner at “The Lobster Trap” and were immediately “entertained” by a few dozen screaming freaks – expressing their displeasure over our new President. (By the way, for the record they weren’t freaks because they were protesting our President. They were freaks because they were freaks.)

One was enjoying his freedom of speech to the point of dropping F-bombs at full volume. His efforts got him a nice invitation for free lodging, first in the back of a police cruiser and presumably at the local, city jail. Unfortunately for us, his disruptive nature blocked the front of the Lobster Trap. So we headed elsewhere for dinner.

I ADORE democracy…even when it screws up my dinner plans 😉

The Weather is Still Messing with Visitor’s Plans to Ski…

Traffic at the ski resorts will be down again for another weekend. This morning will be about the best conditions of the weekend with showers in the forecast for much of the rest of the weekend. Chances of rain range from 50% chance across WV and Maryland, to 90% chance this afternoon, Sunday and even into Monday.

If you’re in the area, don’t let that stop you from enjoying the snow. Only Cataloochee Ski Area is CLOSED for today. The rest of the ski areas are open and operating and some with remarkable conditions and plenty of slopes. 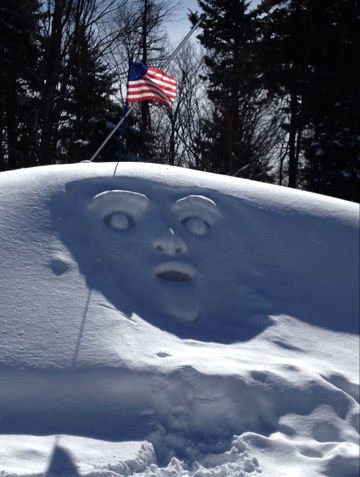 Canaan Valley Resort is kind of showing off today by ADDING two more open trails to their offering today. They have 18 slopes open and that had me thinking that Steve and his talented grooming crews up there had pushed that big, snow whale around to build base. They haven’t used that pile yet, so they’ve got plenty of snow to spare to make it through the rest of this January, winter thaw.

Snowshoe Mountain is still boasting 54 of 57 trails open. As has been the case thus far this season – things are somewhat better into West Virginia and Maryland.

I heard from a long-time, Wisp Resort fan (Nils “Bear” Warga) on Friday as he emailed me, “Just arrived at Wisp. Snow is far deeper than I expected, even on slopes that were only opened 7-9 days ago (the East Ridge). So happy.”

Anyone named “Bear” will get “an open mic” on this website. Seriously though, the conditions look pretty good up that way. 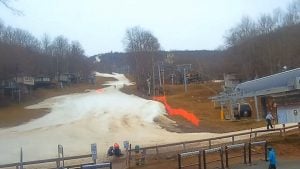 Sugar Mountain this morning at 9:30am. Click to Enlarge.

I like sleeping at night, so I tend to be honest to a fault – and saying that, you’re gonna find the snow soft and thin in some spots EVERYWHERE. You’re just going to see better conditions further north and more of the “thin coverage and bare spots” into the North Carolina mountains.

I’m still VERY impressed with the conditions at Beech Mountain this morning. They’ve held up well and while there ARE some thin coverage areas, they look better than Sugar. Appalachian is still looking like the best snow in the High Country right now.

Again we DO have some more rain and continued mild temperatures in the forecast for this weekend and even into Monday. So things won’t be getting any better for yet another five to six days.

We would highly suggest that you have a look at our webcams for a look at conditions at your favorite ski area. As Bryce Resort’s marketing crew reported, “Get outside and come play with us! We still have plenty of snow on the slopes! Don’t believe us? Come see for yourself!”

The theme of today will be:

Snow coverage may vary in areas due to weather and skier traffic. We’ll also see some “Spring Conditions” on the SNOW REPORT.

We mentioned earlier that Cataloochee Ski Area is still CLOSED. They are awaiting the next cold snap, scheduled to hit midweek next week…probably Thursday.

Wolf Ridge Resort was closed the last few days. They are OPEN AGAIN with 7 slopes. Sugar Mountain is down another slope and now have 8 slopes open with thin coverage. One of my good buddies skis Sugar a few times a week and he called me on Friday to say, “Man I cried a little bit when I passed Sugar this morning.”

It isn’t THAT BAD….trust me. Things are looking a but sketch in some areas at the base of the mountain and truthfully I didn’t think they’d be open today, but I think they were able to push some snow around and they may make it to Monday. I’m thinking they will close a few days prior to the cold air hitting next week. We’ll see. I’ve heard from a few complainers about visiting Sugar lately. They reported not being happy about purchasing a lift ticket only to find the slopes not up to their liking and then being disappointed when they couldn’t get a refund.

That’s not fair – since Sugar actually is recommending that you have a look at the slopes BEFORE buying a liftie. Some people…

Appalachian Ski Mountain is going strong with plenty of good coverage on all but Thin Slice and Hard Core.

Ober Gatlinburg wrote, “Today the temperature high is 62 and unfortunately we have a 90% chance of rain beginning at noon. We are excited to see that snowmaking temperatures have entered the 7-day forecast– when the time comes and the temperature/humidity is right, we will be in full force with our snowmaking team. THINK WINTER! At the close of the day, Ober Gatlinburg will suspend ski operations on Sunday (1/22) until cold air returns. All other activities will continue, including tubing and the ski mountain coaster.”

Check the SNOW REPORT for all of the conditions.

SO WHEN ARE WE GETTING THE COLD AIR?

Last season, Joe Stevens coined the phrase “Ski Season Reboot” when things were the pits for all of December and through the Christmas to New Year’s period. Winter got going in earnest at the first of January and we had a good finish. This season we at least had a good Holiday week even though most ski areas, not named Snowshoe, Winterplace, Bryce or Appalachian were only about 50% open. However as we all know – it’s been the PITS for the last couple of weeks and weekends. We’re now HOPEFULLY at the tail end of what will be around two full weeks of January thaw.

Thankfully the forecast is now looking like COLD will return around January 26th and we may even see some snow. Watch Meteorologist Brad Panovich share his Skier’s Forecast video here.

According to Brad and most weather peeps – we should see at least a WEEK of sustained cold temperatures and maybe even AROUND THE CLOCK snowmaking temperatures for the last few days of this month. The pattern is also looking like it could change to give us a good finishing kick for the season.

Man, we could use a great February and March!

Now we just have to hope that Punxsutawney Phil WILL see his shadow and run back in his hole to usher in six more weeks of winter. (The forecast up there IS for sunny skies so we can hope!)

Joe Stevens is a great voice for this cause. The West Virginia Ski Areas does THE BEST job of promoting the month AND the practice of getting more newbies introduced to the sport. On Friday Joe shared a VERY NICE video that was sent to him by Mary Joe Tarallo, the Executive Director of the Learn to Ski and Snowboard program.

The video was produced by a very talented young woman by the name of Halley O’Brien and a worthy watch. I think she wonderfully shares the joy that we all have about skiing and snowboarding. She reminds us that we should share that joy with others and invite new people to share in that joy with us.

Have a look and then give some thought to phoning or texting an invitation to someone you know to introduce them to the sport we all know and love.

SOME CLOSING NOTES AND SHARES…

A week or so ago I complained that more ski areas needed to share video…and coincidence or not…here’s a couple of good ones.

Previous Post
Not the Ideal Way to End the Work Week But Cold is in Sight!
Next Post
Thank God that COLD and SNOW are on the Way this Week for Ski Resorts