SATURDAY WAS PROBABLY A RECORD SKIER VISIT DAY FOR THE SKI RESORTS! 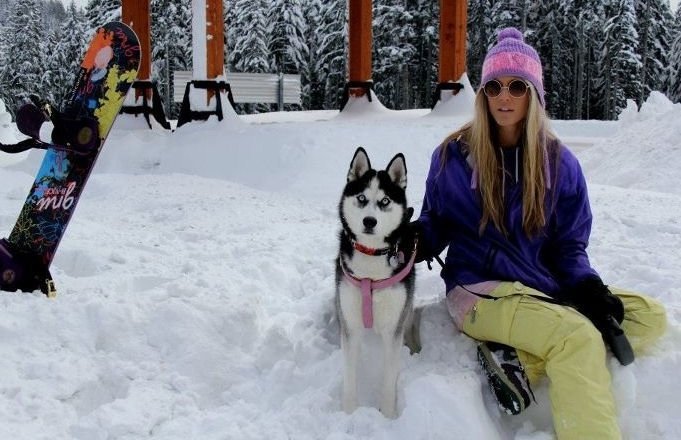 (Thanks to Tina Hernandez for sending this nice photo of a very pretty girl from the other day. Actually BOTH of the girls are pretty but Tina didn’t share WHICH ski area they were visiting and I don’t recognize the scenery in the background. Tina wrote, “Here are my two best friends at the resort from early today.”)

It’s obvious (from all the snow) that they had to be in either West Virginia or Maryland…or perhaps not from around here…but thanks for the photo.

Today marks the midway point in the season for a lot of ski resorts. For some, we’ve only got about six weeks left. That’s only six weekends or 42 days of sliding fun left to be enjoyed. I’ll bet THAT got some of you to thinking…and perhaps a little depressed. Some resorts like Cataloochee, Sugar, Snowshoe, Winterplace, Wisp and others will ski at least another EIGHT weeks and maybe longer. 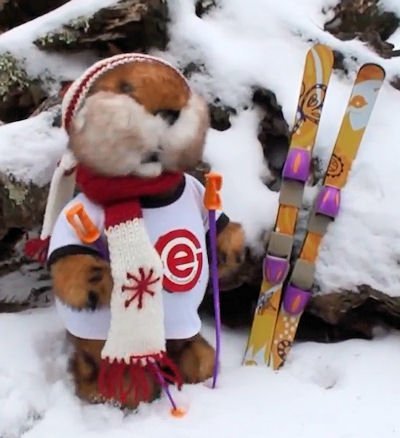 < Southeast Ski from 2013…complete with SkiSoutheast Tee and skis ready to ride.

If the GROUNDHOG sees his shadow up in Pennsylvania…or if our own “Southeast Si” comes through with a favorable prediction tomorrow – we MIGHT have such a strong finish as far as the weather is concerned that it MIGHT prompt some ski resorts to ski on into April. Wisp has gone on until MID APRIL before…at least offering skiing and snowboarding on weekends.

Of course THAT will depend on whether or not YOU GUYS keep coming. Resorts depend on skier interest to keep their ticket windows open. If the weather is SNOWY, the people will come – and the resorts will stay open.

It’s funny – THIS time of year the resorts actually only care that we see perhaps an inch or two of snow to excite the masses off the mountain to drive up and ski or ride. HEAVY snows can actually keep people away. However as we get into mid March, those light snowfalls might not actually do the trick…

So HERE’S hoping for a cold and snowy February, March and early April.

As I hinted, all of the region’s furry critters will be doing some weather forecasting of their own on Monday. Obviously THE MOST famous of all of them is “Southeast Si”.  Okay, it’s Punxsutawney Phil of Gobbler’s Knob and Punxsutawney, PA.

It’s that time again when meteorologists step aside for a furry rodent to make a weather forecast.

Punxsutawney Phil, the world’s most famous groundhog, will be coaxed out of his burrow on Gobbler’s Knob early Monday to let an anxious nation know whether we’ll have an early spring or six more weeks of cold and snow.

The forecast for Monday morning in Punxsutawney, Pa., calls for cloudy skies and a chance of snow showers, but Phil is fickle, so who knows what he’ll do?

No matter the outcome, it’s best not to bet heavily on Phil: His forecast is no better than flipping a coin. Based on an analysis of weather data over the past 27 years, “there is no predictive skill for the groundhog,” according to the National Climatic Data Center in Asheville, N.C.

The center found that since 1988, the groundhog has been right 12 times and wrong 15 times in matching his prediction with the national average temperature for the remainder of February.

So maybe our own “Southeast Si” might be THE authority. At least he’s TWO FOR TWO since we debuted him in 2013. We forecasted an early Spring in 2013 and HERE is that video. We’ll film tomorrow’s forecast…ummm…tomorrow.

Saturday just might have been a record attendance day at some ski resorts. I saw some early signs of that around noon on Friday as I watched some amazing lines on the tubing hill at Wintergreen Resort. They were five and six people deep across ten lanes at 1pm or so on Friday.

On Saturday we drove up to Beech Mountain to have lunch and we were stopped by the Beech Mountain Police just before the town’s sledding hill. They were inquiring about the purpose of our visit. At first I thought, “Damn, this is like going across the border; at least our NORTHERN border.”

Then I thought, “Well darn, is it REALLY anyone’s business WHAT the purpose of our visit was?”

Of course, I was being an idiot. They were inquiring about the purpose of our visit BECAUSE if we were on the mountain to go skiing or snowboarding, they were going to SAVE us an extra couple of miles of driving and have us park at the huge field just below The Pinnacle Inn – BECAUSE all of the gigantor parking lots at the ski area WERE ALL FULL!!!

As it turned out, Beech had every lift cranking, and the lines were only hefty for a few hours around midday as I checked them out from the distance AND from the convenience of my phone (viewing the web camera).

The weather could not have been more perfect. Our ski mountain communities had all had some snow and although only the West Virginia and Maryland ski communities were blanketed with natural snow – the PERCEPTION was that lots of snow had fallen for the previous several days. Conditions ON THE SLOPES at every ski area was the best of the season thus far – even if every ski area wasn’t 100% open.

Appalachian, Beech, Sapphire Valley, Bryce, Massanutten, The Homestead, Canaan Valley, and Winterplace were ALL 100% open on Saturday – much to the satisfaction of their fans. Cataloochee, Sugar, and Wintergreen were ALL only ONE slope short of being 100% open so in reality those ski areas appeared to be fully open as far as skiable terrain and skier visit control is concerned. (The more terrain and lifts that are open, the SOMEWHAT shorter the lift lines are at the main lifts…at least at the larger ski areas.

Highs on Saturday FELT even milder than the 36.8° that it actually hit (taken from atop Beech Mountain at 11:35pm on Saturday) with the strong dose of sunshine. It was in the low to mid 30s pretty much everywhere on Saturday after lows that ranged from 1° at Canaan Valley and Timberline to 9° at Beech Mountain Resort.

Today SHOULD be another awesome day although it’s ALREADY about as mild as yesterday’s HIGH on top of Beech Mountain this morning. As of 8am it is/was 34°.

THE FORECAST…is for some UNDER-DEVELOPED SNOW (rain) to hit a large portion of the region with some snow forecasted a little further north. Another 2-4″ of natural snow is forecasted for Snowshoe and the West Virginia ski resorts while the Virginia ski areas could see a wintry mix of sleet and snow. UNFORTUNATELY the ski resort into North Carolina may see some RAIN this afternoon that MIGHT change over to snow late this evening.  WE DO have a forecast of 1-2″ of SNOW on Monday.

If we’re lucky MAYBE the burning of “Frankie the Snowman” might have affected something for the positive.

That’s IT for me today. Enjoy your day and the Super Bowl. I’m pulling for a good game as I don’t have a horse in the race. I guess I’m pulling slightly for our east coast Patriots.