Saturday was an Awesome-day…and Sunday Should be Even More So. 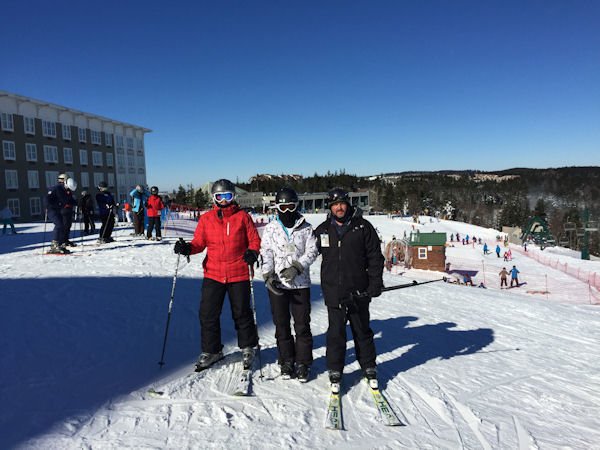 It appears that the front that is affecting our temperatures this morning is “all over the place” as it’s colder in the Southwestern part of North Carolina this morning where temps are still in the teens and low 20, whereas Beech and Sugar are reporting low 30s.

Those colder temps are also in place around Bryce Resort where it is 14°. It’s 18° at Massanutten and 16° at The Omni Homestead Resort.

It is a notch milder at 31° at Wintergreen Resort although some areas close-by are reporting 22°. As I said – temps are “all over the place” this morning. I’m not certain that I’ve seen these kinds of variances from one mountaintop to another in one morning.

The COLD SPOT this morning is at Canaan Valley with 5°.  You can read some of the “notables” below and check the SNOW REPORT for all of the details. 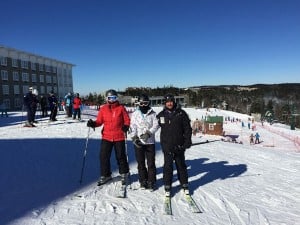 (That’s Ron on the right and his wife, Mindy in the middle posed with my wife Darlene.)

It’s always great skiing with friends. I mentioned Saturday morning that I had the pleasure of introducing some new people to West Virginia and specifically to Snowshoe. My “Bring a Friend to the Slopes” recruits were Ron and Mindy Kent and their daughter, Mackenzie. He and his family are longtime and frequent skiers at Sugar Mountain.

Like ALL skiers…they love to ski a-n-y-w-h-e-r-e that there’s good snow and a downhill slope. …and like EVERYONE who I have introduced to Snowshoe – suffice to say that they now have a different “favorite” ski resort on the East coast.

MY OTHER RECRUITS TO “LEARN TO SKI AND SNOWBOARD MONTH”… 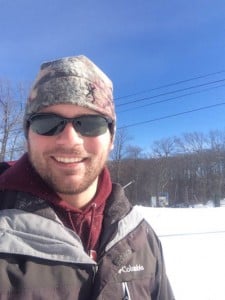 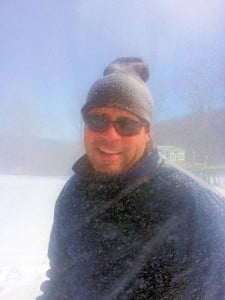 …were Eric Pennypacker of Chesapeake, Virginia, his dad, Joe and friends Tim Renn and John Kelly. They enjoyed Wintergreen Resort this past Thursday.

Eric is the boyfriend of my daughter, Carrigan and after introducing him to Appalachian Ski Mountain over the Christmas break – he’s now hooked. I gave him a few lessons and off he went. According to Eric, he and his dad conquered Wintergreen’s greens on Thursday and I’m pretty certain we have some new ski enthusiasts on our hands.

MORE WEATHER OBSERVATIONS AND OTHER RAMBLINGS…

The quick observation is that it is some 23° “milder” this morning than on Saturday morning and yet lows are still in the teens at a lot of places. THAT tells you how cold it was on Saturday morning. It was -4° at Snowshoe when we took to the slopes. Thankfully the winds from late Friday night had moved on to some other location and that made it a gorgeous and amazing day to ski and ride.

Here’s a NEW ONE for me. This morning the temperature at 7am at Beech Mountain, Appalachian and Sugar are ALL in the low 30s with Beech reporting a 32° reading. Sapphire Valley, over in the Southwestern part of the state typically has been fighting for cold temps these last few seasons – is experiencing a 16° reading this morning. Sapphire is also reflecting the new TREND of reporting “New Snow Last 24 hours:  6-12”

Folks that is ALL man-made snow. Great stuff…but it’s not traditional to be reporting man-made snow in that fashion. Traditionally when you see a report of “New Snow in the last 24 hours” you think “Natural Snowfall”. I wrote about that on Saturday morning and now here’s Sapphire participating in reporting of that nature. With several ski areas reporting man-made snow as “new snow” over the last few days – it IS as if there was some “memo” that went out that suggested the new practice. I sincerely DOUBT that happened but it’s also kind of like when ONE ski area bumps up their base depth by a foot…others quickly follow and do the same.

I’m not sure what the impetus is for these practices. It COULD be explained by using three letters – M.L.K.  (Thanks to Joe Stevens for allowing me to steal that insight.)

MLK weekend in close at hand and resorts need to market the fact that conditions are at the best they’ve been all season and what better way to do that than to report massive base depths of snow and evidently NOW CALL IT “New Snow”.

I did notice that a couple of resorts PULLED that new bit of errant nomenclature from their reports this morning. Glad to see it.

A lot of the mountain snow reports reflect “NO” under the “MAN-MADE SNOW” column and I GUESS that’s a perception thing. Most visitors HATE the snow guns roaring when they’re skiing so resorts are reporting NO snowmaking. Actually every resort MADE SNOW in the last 24 hours but the guns are OFF now so you’ll have the best of both worlds for Sunday. They MADE SNOW and that means awesome surfaces and yet there will be no snowguns “in your face” for Sunday sessions.

Sunday could be “one of those days” to enjoy sunny skies, cool to cold temps and AWESOME slopes conditions with NO snowmaking. Put on the sunscreen and take your cameras with you on the slopes today.

Appalachian Ski Mountain is now 100% open for the first time this season with all 12 slopes and trails open and well-groomed for your Sunday enjoyment. NO Snowmaking for today!

Beech Mountain Resort is reporting 33° this morning. They HAVE turned the snowmakers off and the grooming looks awesome for the Sunday early sessions. Everything on the mountain is open for skiing and snowboarding with the exception of Upper White Lightning.

Wolf Ridge Resort is reporting, “After nearly a week of snowmaking, we have a DEEP base (8 feet or more in some areas). Today is going to be a great day to be on the slopes with plenty of snow and warmer temperatures. We look forward to seeing you out there.” They have 9 of 15 trails open now.

Ober Gatlinburg is looking great now with 8 of 10 trails open. It is amazing what several great days of snowmaking can do!

Wintergreen Resort is reporting a 31° reading this morning and that, “Everything is open except Big Acorn, Outer Limits and the jump section of the Advanced Park.” That makes it 23 of 26 trails.

Snowshoe Mountain is still holding at 51 of 60 trails but there were some MAJOR “whales” of snow on unopened slopes so I’ll bet that a few more slopes get opened up on Monday or so. I have to tell you that Cupp Run was awesome to ski on Saturday. Upper Cupp was groomed nicely and had very few “hard pack” or slick spots even later in the day. Lower Cupp was nearly perfect. The MIDDLE section of Cupp Run was a beast but fun to ski. They had the snowguns blasting and it really affected visuals. It wasn’t so much that your goggles froze up, it was more of a manmade BLIZZARD where snow was coming down so hard. On top of that the snow on that section was over a foot deep in heavy manmade powder and you really had to work to carve the turns.

As I said though – it was really awesome hitting Cupp.  The other side of the mountain over on Sawmill, Camp 99 and Widow Maker were all nicely groomed and frozen crisp so that it was very fast. I was tracking TRACE SNOW on Saturday and some kind hit 63 mph on Widow Maker. My top speed on Widow was 40.2 mph and I thought that I was on the edge of being out of control…so I can not imagine the kid who did 63! I wished I had seen that…as I’m wondering if the “GPS gremlins” were incorrectly reflecting that speed.

Canaan Valley Resort is THE COLD SPOT of the region this morning with a reading of 5°. I thought that was an error when I first saw it but then confirmed it with other resources. It IS indeed 5° at 8am this morning. Conditions are THE BEST they’ve been all season long and in ONE WORD the conditions are “AWESOME”. 17 trails make up the Sunday offering for skiers and snowboarders.

Ditto those conditions for the “brother resort” in Davis, West Virginia of Timberline. These guys have some of the best terrain in the region and you’ll hear that from competitor resort ops in the region. Conditions are AWESOME right now and with 19 trails open for day sessions Sunday…

Winterplace Resort is reporting 20° this morning and everything on the mountain is open except for “Turkey Shoot”. That’s 26 of 27 slopes and trails with awesome conditions.

By the way, we got some awesome photos from Will Mauney and Jordan Nelson from up at Beech Mountain over the last couple of days and I’ll try to share some of those with you guys later today or Monday.

In the interim, email me with any comments or questions at [email protected]

Previous Post
WHEN DID SKI RESORTS START REPORTING MAN-MADE SNOW AS “NEW SNOW”?
Next Post
A Cool Drone Photo from at Beech Mountain on Saturday!