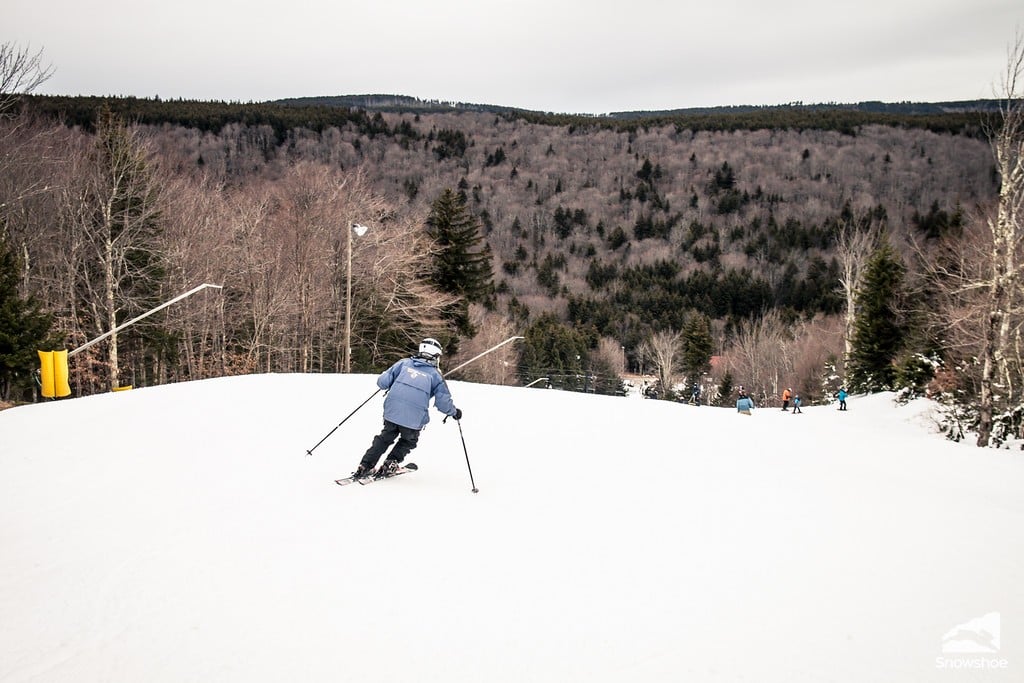 Merry day after Christmas!  If that’s a thing.  This is Kenny here with you guys today.  Mike is currently on his way to Snowshoe for a week of fun, snow or no snow, so I’m doing the morning report.  This is actually the first time I’ve done the First Trax article all year, which is really weird as usually I start it up in early November.  With the warm and slow start to the season though, Mike has been handling it since there really hasn’t been a lot to talk about for the most part, save for a couple of cold days here and there. 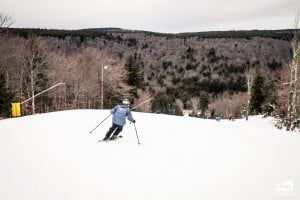 From last weekend at Snowshoe. Oh how things have changed! Click to enlarge.

I’ve been in Northern Virginia for about a week now, so I missed out on the fun last weekend when there was about a 48 hour period of snowmaking.  That seems like such a distant memory right now as it’s been nothing but warm temps and rain all week.  I have been reading Mike’s updates every morning, and it’s crazy to see how we went from all the excitement of last weekend’s cold snap to seeing posts with “bleak” and “rain report” in the title.  Even weirder was earlier this week when I made some posts talking about some of the resorts re-opening their golf courses for the holiday time period.

Crazy stat, I have more days of playing golf in November and December than I do days on snow!  Didn’t think I’d be saying that on the day after Christmas.

A couple weeks ago I posted an article where I compared the weather at the start of this season to years past, wanting to see if truly was as bad as we thought.

I posted that 10 days ago and my conclusion was that there were a couple years with similar starts up to that point in the ski season, but that if it continued through the end of the month we would be in unprecedented territory.  Unfortunately, that has happened and we are in the midst of the worst ever start to a ski season here in the Southeast.  You can take some solace in the fact that the entire East Coast has been in a similar situation.  I follow a snowboard community on Reddit and I can’t tell you how many snarky comments there have been from East Coasters whenever somebody from out west posts a powder picture or video.

Some Hope for the New Year

There is some (more) bad news but there is some good news to report in terms of the weather outlook.  The bad news is that it’s going to continue to be warm and wet for the next 5 days.  Right now, Cataloochee, Timberline, and Snowshoe (EDIT: And Wisp) are the only resorts operating for skiing and snowboard activities.  Quite honestly, I don’t expect any of them to make it to Wednesday, or even the end of the weekend for that matter.  However, it looks like Thursday is when we are going to see things change for the better.  Brad Panovich talked about this in his video update from the other day.  If you haven’t seen it yet, here it is.

It looks like we’re FINALLY going to see some prolonged colder temperatures arrive on Thursday and stick around for a while.  Check out the GFS model meteogram for Boone, North Carolina which is close to App Ski Mountain, Beech Mountain, and Sugar Mountain. 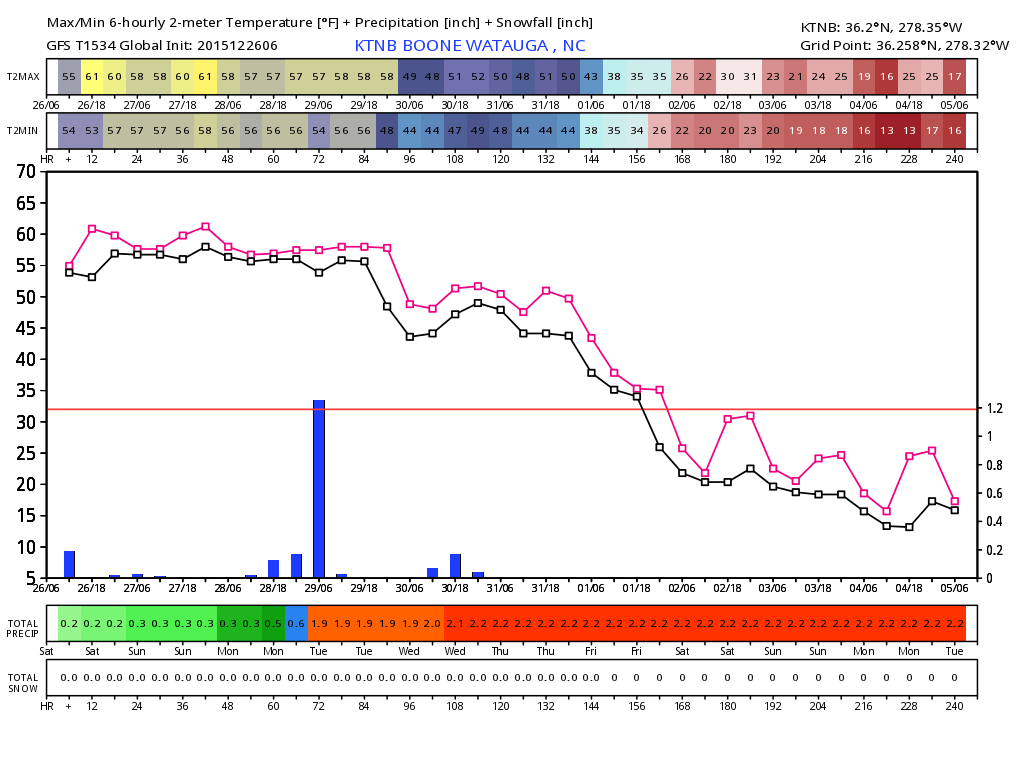 That red line is the freezing mark and you can see temperatures look to take a nose dive late on Thursday.  Here’s another weather geek map for you that shows some positive signs for the new year.  This is the GFS ensemble 5-day average temperature anomaly for January 1st through January 6th. 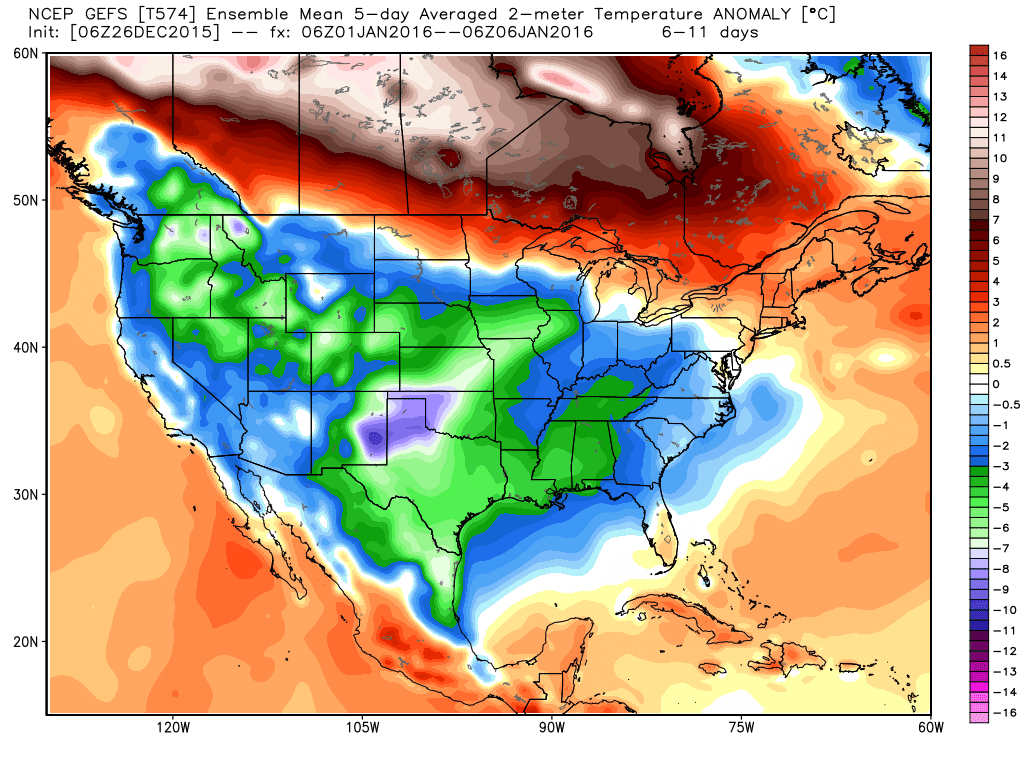 Blue and green is good!  We like those colors!  Anything but red!

So while it looks like the end of 2015 is going to be a dud, the beginning of 2016 looks to be better.  Always remember that the forecast can change, but it is promising to see this in the models.

We probably won’t see any significant snow during this time period, but if we can get several days of snowmaking that would be fabulous.  The resorts have had basically two days in a row max to make snow this season.  And they’ve worked miracles with those windows of opportunity.  If they could get something like 5 days in then we’d be in business.  So keep your fingers crossed!

As I mentioned, there are three resorts that are opening for skiing and snowboarding today.  Cataloochee, Timberline, and Snowshoe are all hanging on.  Cataloochee has a big announcement on their homepage stating they are not open for night skiing and to call ahead before making plans to ski.  Looking at their base cam, I’d highly suggest doing this and I’m not sure they will be open after today.

In West Virginia, Timberline is open with a couple of trails and Snowshoe somehow has double digit runs open with 10.  I have no clue how they have managed that but kudos to them.  Hopefully Mike can get some turns in today and tomorrow!  Snowshoe is having a rail jam today in the Powder Monkey park, so that might be pretty fun to go check out if you’re on the mountain.

EDIT: Woops, I forgot that Wisp was opening today.  They have one trail open, Sunset Boulevard, and 1 conveyor carpet open along with the Wisp Kids area and carpets

Other than that, it’s all quiet right now across the region.  I think I’m about to go play some more golf and/or run off some of the enormous amount of Christmas food I ate yesterday.  Next weekend at this time hopefully I’ll be talking about going snowboarding!  It looks promising.  Think cold and think snow!