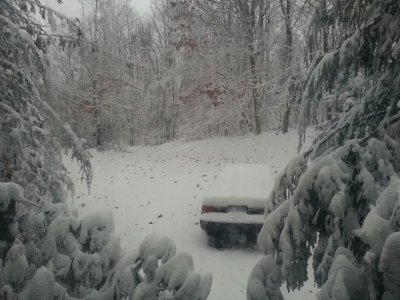 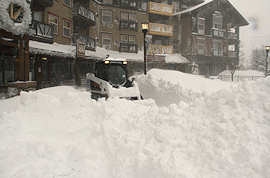 <Photo from today at Snowshoe from Krysty Ronchetti

I hope your Halloween costumes consist of snowsuits! Sandy’s snow is here to stay. Flurries started to fall late Sunday night in the mountains of North Carolina, and the rest is history. With the snow pouring down, numbers will continue to rise, but here’s the latest from the area resorts: Cataloochee with four inches, Beech with eight, Sugar with seven, Wolf Ridge with eight, and the winner, Snowshoe Mountain, with a whopping 24! And yes, just yesterday it was reported that Snowshoe had a mere dusting.

We’ll continue to check in regularly to get updated information so be sure to follow us on twitter @SkiSoutheast for the latest and the greatest.

With the heaping amounts of natural snowfall, many resorts have the potential to open early. Here’s a look at what’s happened over the past two seasons:

It’s safe to say that many resorts will break their own records this year, or at least the late streak. If that’s the case, we could be looking at well over 100 days to get out and ski/board. Heck, maybe even closer to 130; wouldn’t that be nice?

Feel free to email me your comments, photos, videos, etc. to [email protected].

Previous Post
Snowshoe Mountain is Getting Dumped On!
Next Post
It was only 8am but People Are Waiting to be the First to Ride at Sugar this Morning