Right Around the Corner 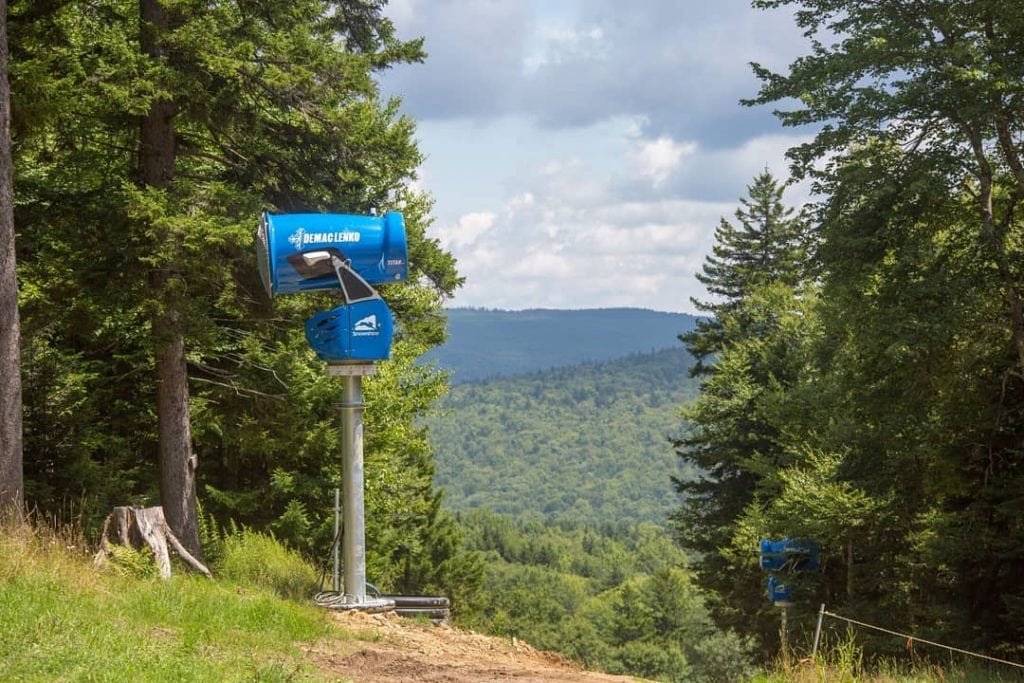 In my not so busy life these days (that is until the snow starts) I serve on the board of directors of the West Virginia Hospitality and Travel Association. At the most recent board meeting I got to announce to all around the table that snowmaking will be starting in about two and a half months. Just to make sure I used my fingers to tabulate the time frame and that’s what I came up with.

There was some hand clapping from the snow lovers on the board, but there were also some noticeable groans from the majority of the members on the board. I got to thinking, which my wife says usually gets me in trouble. These are probably the same folks that complain the first time the temperature reaches 90-degrees during the summer. In other words, you just can’t please everyone.

But think about it folks, as I scribe this column, high school football starts across the state of West Virginia, meaning the sound of snowguns can not be that far behind. The last two mornings I stepped outside to take my son to catch his school bus, the temperature was in the mid-50’s. So, a nip in the air has started. But as I look at the upcoming temperatures I see the number 90 for daytime highs, so that means most of you out there will still be thinking about hitting that little white thing around for a while longer. However, I know most of the mountain operations folks around the southeast have been getting things ready for that true first cold snap.

If you don’t realize just how important snowmaking is to each and everyone one of the ski resorts in the region, you just don’t understand the winter sports industry in the southeast. There was a day (dinosaurs may still have been alive) when the days of having fun on the slopes in the southeast was depended on just natural snow. Wow, I can only imagine what that meant to anyone who wanted to make plans to go skiing and have some fun in the snow. May I take this opportunity to say thank you to the folks who decided to start making manmade snow. With the fact that the snowguns are going to be fired up, weather permitting, in two and a half months, we have come a long way.

Along this line of thinking, I ask you, how much do you spend up updating your ski or snowboard equipment each year. That is of coarse if you even buy anything new at all. Now if you have kids in the sport, I know that you are buying at least new clothes each year and probably news equipment every other year as they grow up. My 14-year old has already gone through a couple of ski jackets. I did get smart on the last one and bought a couple of sizes too big for some grow in space. Don’t tell me you haven’t done that if you have young ones out on the slope.

Now let me get back on the subject of spending money on updating your equipment each year. Most of us, probably don’t do that. Heck I am still snowboarding on a board that I purchased over ten years ago. This is not the case with just about every resort in the southeast region, when it comes to spending money on snowmaking. A number of years ago, the majority of the resort owners in our region realized just how important snowmaking was and still is to the industry and made the choice of putting capital investments in snowmaking to the head of their yearly capital wish list. All you have to do is read any “What Is New” resort article that is published on this website. I can’t remember that last time when I didn’t read about an upgrade in the resort’s snowmaking system. Many case, the upgrade reaches into the million’s of dollars. That’s right, it’s not cheap to make sure there is snow on the slopes in the southeast for everyone to enjoy.

Seriously folks, the next time you complain about wearing your goggles during your time on the slopes because snowmaking is occurring, just think while you on the lift, that you probably wouldn’t been having any fun that day if it wasn’t for the art of snowmaking.

I recommend to start watching the slope cameras at the resorts. You can find links to cams at every resort in the region right here on skisoutheast.com. I do it every year. I find it fun to watch the snowmakers out on the slopes getting everything ready for those first days or nights of snowmaking. If you have been watching over the summer, then you have seen, like me, that some resorts even replaced some underground piping used for snowmaking.

Since I first got into the business in the mid-80’s, there isn’t as many guns that get towed around out on the slopes anymore. Most of the snowmaking is now coming from more efficient tower guns. I have also enjoyed watching those towers installed along the sides of the various slopes. Hey just like mother nature, the higher you can drop the stuff, the better it is for making an impact on the slopes.

I was talking to a veteran snowmaker just the other day and he mentioned that most of the work these days happens at a control desk in the resort’s mountain operations offices. Instead of 10 guys out on the slopes moving guns, most of the tower guns are now remotely controlled and is operated by just one person inside an office.

So as we get closer to that magic day of the guns firing up, here’s hoping you are looking forward to the upcoming season. There is a lot of work going on right now to make sure everyone’s time on the slopes is enjoyable.