I was visiting with Lori Epp, Wisp Resort’s Events & Public Relations Manager and Matt Taylor, Director of Operations of Wisp Resort’s new Adventure Sports Center International atop Wisp at Deep Creek Resort. They had just opened the new Adventure Sports Center main building which will serve as the main retail space and ticket center once the whitewater park opens. Drawing

Adventure Sports Center International (ASCI) is home to the world’s only mountaintop whitewater course and to a diverse array of adventure sports opportunities.

The Adventure Sports Center International concept came out of many discussions and brainstorming after the 1989 World Championships which were held on Savage River which is located about ten miles from McHenry, Maryland and home to Wisp Resort. According to Taylor, it was a huge event for Maryland but getting the necessary water appropriated for those championships was like “pulling teeth” and event coordinators at that time decided that they would host only one more previously planned race on that location. Those were the 1992 Olympic trials for the Summer Olympics held in Barcelona, Spain.

During those Olympics, they witnessed the artificial whitewater facilities that had been built to host the whitewater events and competitions. According to Taylor, Spain built the artificial course because they knew that the Olympics depended on water being ready at a certain day and it has to be sufficient to compete.

To accomplish that, they built the gorgeous course that now exists in the mountains of Northern Spain to host the hundreds of racers that competed in the Summer Olympics. The visionaries and founders of the Adventure Sports Center International in Garrett County MD where in attendance and literally set things in motion to do the same thing in Maryland. That was fifteen years ago; today, the Adventure Sports Center International is set to begin full operations this summer.

Matt Taylor describes the team that worked to bring the project to fruition as “the epitome of perseverance.”

The way that the ASCI is constructed, they have an entry pond and a huge reservoir that feeds water behind that.

There are four massive pumps in the pumphouse at that location that literally shoots water out horizontally, creating the rapids right out of the rocks. From that point, things that Taylor referred to as “wave shapers”—pneumatically controlled (air) bladders underneath metal plates, invented by their designers—literally raise the bottom of the river up and down, which allows them to fine tune the wave, so that they can create a hole or a wave, etc.

There’s a conveyor belt that will take rafters from the lower pond to the upper pond to begin your ride. The course is about one-third of a mile long and there are over ten individual rapids along the way. Four other wave shapers are embedded in the course at various points to create the best experience around the entire trip.

During the construction phase of the project, engineers had previously thought that they would have to truck out most of the ground and rocks that were indigenous to the top of the mountain. However, once they began digging, they found house-sized rocks and truck-sized boulders that were considered an amazing “gift” and used them to construct the course. These red and sandstone boulders line the entire course. 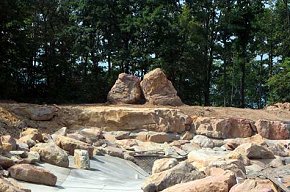 The Adventure Sports Center International course designers were looking for a place to construct the center and according to Taylor that was one of the biggest challenges in Garrett County MD. They knew that they needed a small reservoir of water or at least a place where they could build one. Deep Creek Lake, which is located at the base of Wisp Resort (and viewable from up top), was not financially feasible due to high land costs, etc. According to Matt Taylor, there are numerous courses located around the world that are constructed next to large bodies of water.

One of the awesome things about the Adventure Sports Center International project was the synergy that resulted between them and Wisp at Deep Creek Resort. Wisp decided to donate 18 acres on top of the mountain in addition to donating 550 acres about one mile away from the facility in a watershed called Fork Run. (In Maryland and the Garrett County areas, “creeks” are called “runs”.) Project developers are turning that area into an adventure park. That area contains 65-foot rock faces that sport climbing groups and adventure seekers love. They are developing a great climbing center within that area.

They are also developing about ten miles of mountain bike and running trails at that location as well.

According to Matt Taylor, the real synergy between Wisp and Adventure Sports Center International was more than just within shared covenants and the operations, etc. According to Taylor the real synergy was about the water used within the whitewater facility. Much like Wisp Resort pulls water up to the top of the mountain for snowmaking operations, the Adventure Sports Center International will pull water up from Deep Creek Lake as well. They will use the water in the summer. Wisp tied in their pump system to the ASCI’s partially because ASCI needed Wisp’s pumps to get water from Deep Creek Lake, but also for two other reasons. 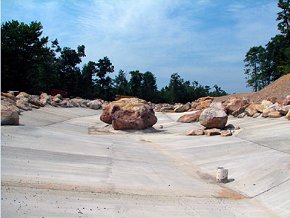 Wisp developed 2 one-foot pipes to pump water around their course during the winter. What Taylor said was that Wisp’s snowmaking operations were among the most sophisticated in the world and they require their snowmaking water to be a certain temperature. Wisp spends a lot of energy actually lowering water to their desired temperature before feeding it to their system. The Deep Creek Lake below can still be around 45° even in the winter, so they use these newly developed pipes to feed water around the Adventure Sports Center International course to lower the temperature further. They literally use the ASCI course as a giant radiator to make snow. Experts found that it uses a lot less energy (and it’s a lot cheaper) to simply send water around the course in the midst of winter.

The second synergy is that then during the summer, while their course is being used, the water heats up and ASCI desires to keep the water as natural as possible. They have planted plants in their pond. They are rigorously monitoring the water for any kind of health variables. To help keep things at near natural levels they will be discharging their water throughout the Wisp irrigation systems to irrigate the golf courses and residences on top of the mountain. According to Taylor, “This water is kind of like ‘gray water’; it will be reused in a very efficient manner.”

Their goal is to be THE adventure sports destination for the region. The alliance between Wisp and Adventure Sports Center International makes it such that Wisp at Deep Creek can offer sports enthusiasts the very best of a wealth of activities including snow skiing and snow boarding during the winter, and of course hiking, biking, whitewater rafting, rock climbing and golf during the warmer months! 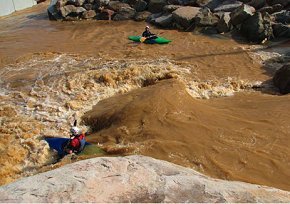 Included within their plans is to locate the International Whitewater Hall of Fame on the location of the Adventure Sports Center International complex. According to developers it may end up morphing more into an “Adventure Sports Hall of Fame” because as he says, “Garrett County hosts much more than just whitewater.” However, he quickly adds, “For whitewater, this region and Garrett County is almost as ‘mecca’ as you can get! There’s more class III, IV and V streams jammed together within that area than virtually any other part of the United States.”

The ASCI is in the final stages of testing the course and, unlike all other variable whitewater courses in the world that require hours and even days to alter, the ASCI facility utilizes a new technology than allows it to be completely adjusted within 20 minutes. This provides maximum variability to deliver the best whitewater experience possible to users of all skill levels and interests.

The ASCI whitewater course is unique in its design and an exciting addition to Western Maryland. Spanning 1,600 feet, the course closely resembles a natural waterway in its landscaping, design and water flows. Participants will enjoy reliable whitewater that ranges from class I to class IV in difficulty, and can be additionally varied to produce hydraulic waves more suitable for slalom paddling, freestyle paddling or even the thrill of whitewater rafting.

With a Grand Opening in Spring 2007, ASCI will introduce the next generation of whitewater parks. For more information about the whitewater course and special programs, please call their offices at (301) 387-3250 and tell them you read about them on SkiSoutheast.com or HighCountryOutdoors.com

Their base price for a guided ninety-minute trip is $40; private boater access to the course is a flat daily rate of $15. Prices for all other ASCI programming is pending.

For more information, be sure to visit their website at www.adventuresportscenter.com.