Rain, Rain, Go Away…Waiting for the Cold Front to Come in… 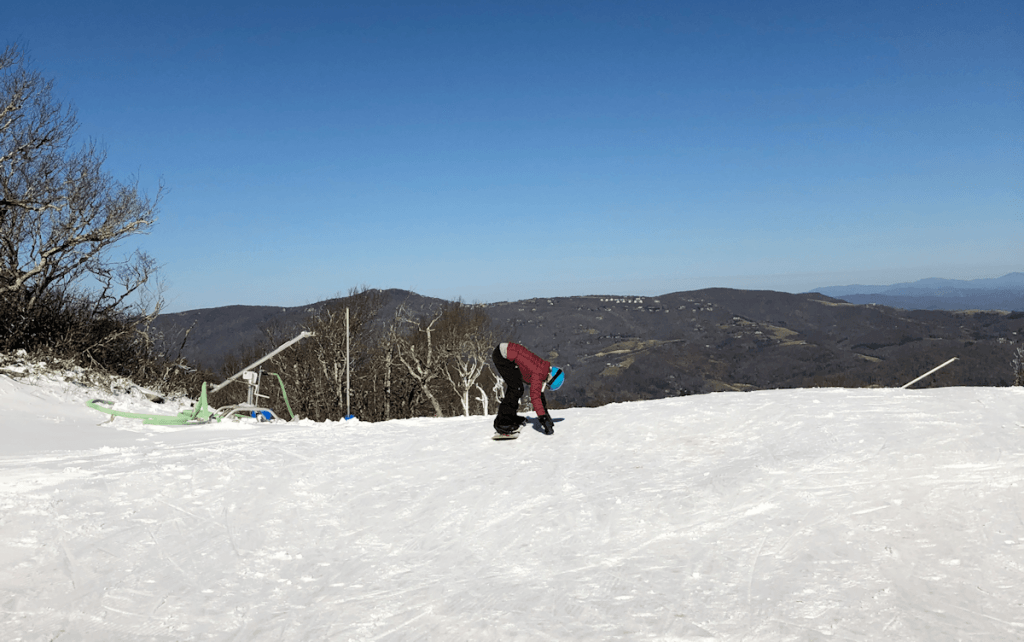 I quickly updated all of the morning temps across all 16 ski area mountaintops this morning and saw temperatures ranging from 34° at Snowshoe, Canaan Valley and Wisp resorts to 46° across some of the Virginia, Tennessee and North Carolina mountains.

I also saw a lot of 24-hour damage to the snowmaking efforts of just a couple of days prior. As I popped in and out of weather data across each area I saw .46″ inches of rain that fell at Canaan Valley; .7″ of rain at Garrett County, Maryland (home to Wisp Resort); .6″ of rain at Snowshoe (which did adversely effect their early base); .93″ of rain at Appalachian Ski Mountain (more about their early base in a second) and 1.2″ of rain (the most we saw) at Sugar and Beech Mountains.

Before I get into base coverage (since there’s only one ski area open today – and surprisingly so) this round of “under-developed snow” as Joe Stevens calls it, got me to thinking about just HOW MUCH snow would this have been if the temperatures were just a few degrees lower.

Unfortunately, the temps are what they are and this mid-November round of moisture simply dampened everyone spirits – except for those hearty souls who were out making turns at Sugar Mountain on Monday.

I kept checking Sugar’s updates this morning expecting to see them announce a closing for Tuesday, but as of 8:43am they are open for business as usual. A few readers fired me some emails seemingly kind of snickering at the fact that Sugar IS open with less than primo conditions, but the truth is if they want to be open and offer some terrain to play on AND if there are people who are willing to pay to play…then good for them. (“Them” being both those who partook of the snow on Monday and for Sugar for making it available.)

It IS what it is…as they say.

A Difference in Perception? Business Model? Does it Matter Anyway?

A few readers also shot me a couple of screen captures from various ski areas who were not open on Monday as if to compare quality of conditions. I did the same things this morning. Below is a shot of Appalachian Ski Mountain – who LOOKS like they would be THE PLACE to be today. (They are not opening until Friday.)

Snowshoe has piles of snow ready to move around.

I’ve shared conversations recently with numerous of the ski area management teams and in one way or another, they all provide some version of, “We could be open today, however we’re thinking long term and quality of product.”

…and trust me when I say that IS the sentiment shared pretty much across the board.

This morning one person emailed me, “Why does Sugar open when nobody else can?”

(I didn’t get permission to use their name, so I’ll leave it at that.) The question was incorrectly worded though. It should have been, “Why does Sugar open when nobody else does?”

My buddy, Joe Stevens says it often every season, “How much snow do you need under you to go down a mountain?” Sure we all have visions of powder up to our armpits in our descriptions of perfect conditions. However, nobody ever said it has to LOOK pretty.

In fact, during these “less-than-stellar” conditions, Sugar’s ticket windows prominently post advisories that guests should have a look at the slopes before buying a ticket. So I guess the moral of this story is – if ski resorts build it (a base), then guests will come.

To be honest, I used to snicker a bit when I’d see Sugar open with a five foot wide swathe of snow connecting the bottom. But you know what? Good on them for being willing to provide a spot for paying customers to play.

A buddy of mine is a huge fan of Sugar and he said that on Monday he was riding up the chairlift with someone who was complaining about the thin spots, etc. He said he looked at the guy and said, “Dude, if you want perfect conditions you do know you could go somewhere else today, right? Oh yea – actually no you can’t because nobody else is open! So just chill and enjoy.”

He said the guy laughed and said, “Damn. You’re right!”

So it IS all about perception.

(Also note that the photo of the day IS of Sugar on Sunday after one day of snowmaking. 48 hours later it might look a bit rough. However, give them some cold air and another 24 hours and it will look pristine again. Photo taken by Kelly Melang.)

Another couple of people emailed me on Monday with the following:

“Hey guys. It’s looking like this winter is going to be a bad one for mountain school administrators, huh? Lots of snow days. – David Shannon, Blowing Rock”

Denise Armstrong wrote, “It looks like your long-range, winter forecasts are going to be heavenly for skiers this season! I’m so excited!”

Obviously, long-range forecasts are just that – long range. However, if this week is any indication of how our winter will ultimately shape up, skiers and snowboarders will indeed be in snow-heaven. As David hinted, I could see frequent, early morning phone calls from school admins saying, “Good morning parents. Due to the overnight snowfall, there will be no school today.”

Oh wait. I won’t get those anymore as my youngest is now at Virginia Tech. Oh cool.

We ARE seeing a pretty cool pattern of cold and moisture and it’s only mid-November.

If you want to drop me an email or comment, feel free.