RAIN DIDN’T WASH AWAY THE SNOW AND IT IS NOW SNOWING! 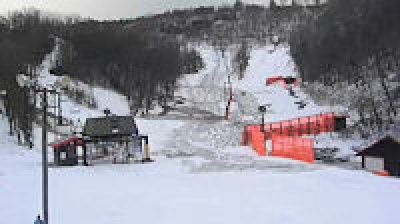 Moderate to heavy snow is falling and Tonette's already mentioned some SNOW TOTALS from around the region. I want to chime in with my nickel's worth as Twitter was on fire Thursday evening as HUGE RAIN hit the resort areas.

I remember back in 1995 I was up on Beech Mountain attempting to operate a restaurant just down from the entrance to Beech Mountain Resort. We opened Thanksgiving Weekend and as if on cue we had one of the warmest winters on record. Sheila Fletcher was the Marketing Director at Beech in those days and she was feeling sorry for us and called me prior to Winterfest Weekend to inform me that Beech was going to have the Atlanta Hooter Girls to show up on the mountain. She was kind enough to ask me if I would like for them to stop in our little restaurant. YOU KNOW MY ANSWER. We were desparate for business.

I'm not certain what I had done that was sooooo bad in those previous years but some kind of crazy karma was in gear because AGAIN as if on cue the skies opened and dumped 11" of RAIN here in the High Country over a 2-3 days span. I'll never forget that weekend. Obviously the Hooter girls cancelled their gig; Winterfest didn't happen; the ROOF literally (not figuratively) fell in on the building we were in and on my home to Seven Devils that night I had to stop 200 yards from my home as the main road had fallen away and the drop down was some 30-40 feet!

Again THAT was in 1995 and that was without question the rainiest, warmest winter that I can personally remember. I'm certain some old-timers can relate others. However, THIS WINTER will go down as the craziest, roller-coaster winter on record in my humble opinion. The weather has been so "mercifully" well-timed to deliver cold and snow in time to make for a very nice Christmas-New Year's week. Ditto for MLK Weekend, and after 3-6" of RAIN fell across Western North Carolina and into Virginia, Tennessee and portions of West Virginia – we NOW see snow falling and cold temps that will insure a GREAT weekend this weekend.

Last night as the torrential rains gave way to snow I was witnessing "waterfalls" of rain rushing down my driveway, bordered by beautiful snow. Beech and Sugar are reporting 2-3" of snow and others are in the 1" range with SNOW still falling. Snowshoe is reporting an inch of snow this morning after 2.18" of RAIN.

THE GREAT NEWS AGAIN…is the fact that the temperatures have taken the anticipated nosedive that was forecasted yesterday and here we are on Thursday seeing snowguns blasting and God providing a bit of natural snow.  The forecast for Snowshoe from NOW through Sunday is for MORE SNOW – perhaps up to TEN INCHES of it! – and for great temps that will allow for around-the-clock snowmaking. Temps will be a notch milder but allowing for around-the-clock snowmaking for the mountains of North Carolina, Maryland and most of our coverage area. Perhaps 2-5" of snow should fall in Western North Carolina according to the NWS. Of course we'll let Brad Panovich give us his take on that later tonight. 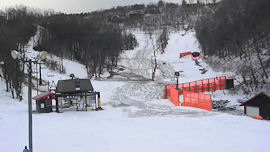 …you can see the water run-off at App this morning! That was after 5.82" of rain fell in Blowing Rock. That will history by this afternoon!

That's been the email of the day this morning thus far anyway. Are you guys not paying attention to the fact that we have wired up these mountains with webcams so much so that the mountain admins can't sneeze without us knowing about it! Okay, THAT is a bit over the top, but good gravy just click over to www.ResortCams.com and let your mouse convince you!

Conditions will be great again for this weekend. If you have a trip planned, you're in for a great time!

Tonette will provide her insight in a bit. I thought I'd just drop in for a quick sharing of data.