Rain and More Terrain for Your Friday

Rain and more terrain might sound like a country song, but it just the story of today.

It would be easy to take a pessimistic point of view this morning with rain (and in some locations heavy rain) falling.

However, it is also really easy to be optimistic as there are more open trails today AND more snow and cold in the forecast.

After the week of incredible snowmaking and the natural snow mixed in, we were due for an icky day and today certainly fits that. The system will move through late tonight, and then some of our favorite words come into play – Northwest Flow Snow.

Our own Brad Panovich shared his latest skier’s forecast last night and the weekend certainly looks promising especially for our northern resorts. Check out Brad’s forecast below.

I am certainly digging that colder pattern.

The resorts have taken full advantage of the snowmaking conditions this week as a number of new trails are open across the coverage area with three resorts – App Ski Mountain, Bryce Resort and Cataloochee – are operating with 100% slopes open.

Canaan Valley doubled its number of open slopes, while Snowshoe is offering its largest number of trails so far this season.

Just to give you an idea of how successful this week was for the mountain operation crews, check out this video from Bryce Resort.

On top of the additional terrain, conditions look fantastic even with some underdeveloped snow falling today.

Kenny Griffin is out on the slopes today and tomorrow at Massanutten so be on the lookout for some on-snow updates over on social media. He shared some photos this morning (as well as provided today’s featured image). 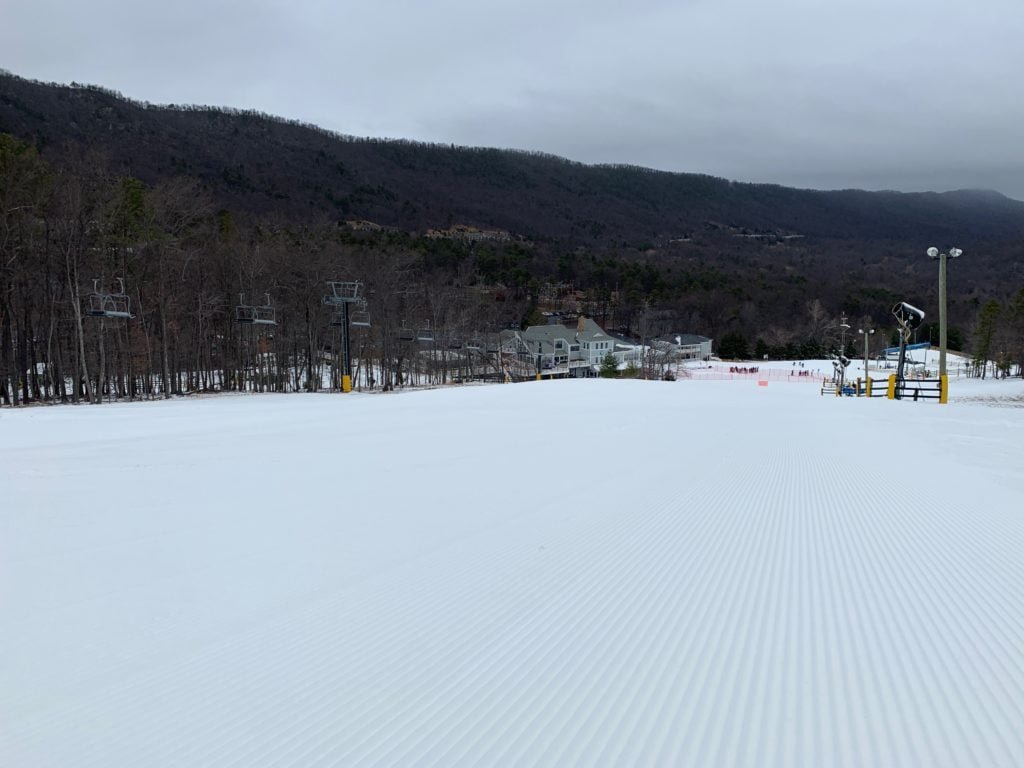 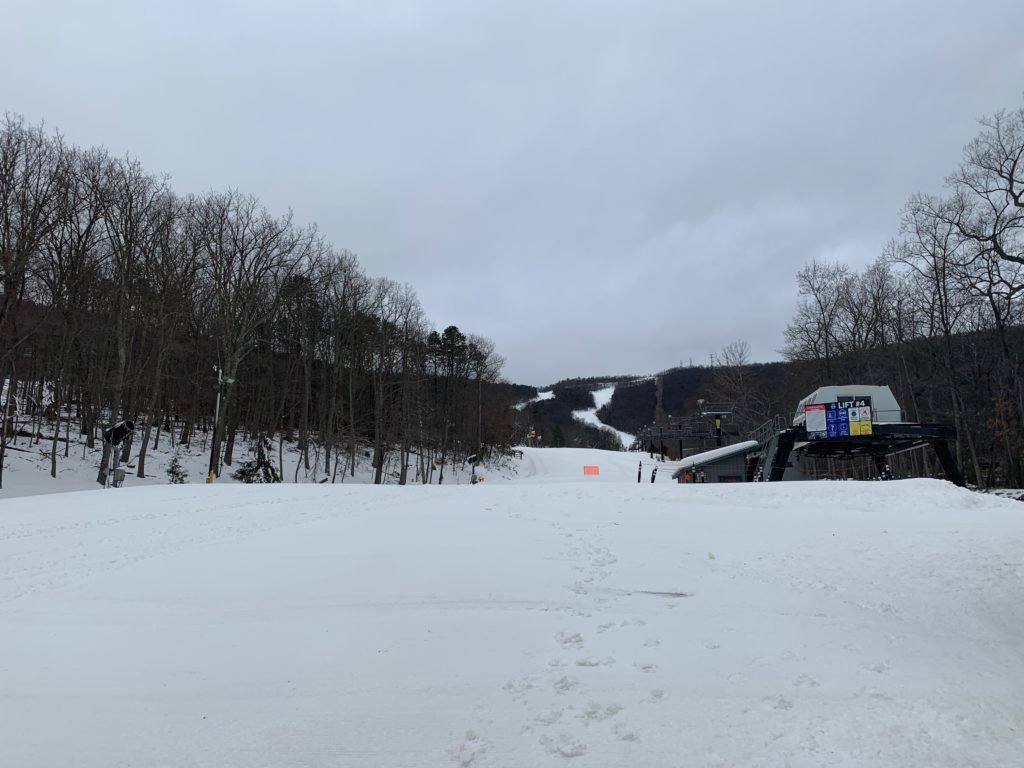 Here is a quick snapshot of where we stand as we enter the weekend.

North Carolina
App Ski Mountain – 100% open as they are playing on 12 slopes with five lifts operating. They have a 42-60” base with a packed powder surface.

Beech Mountain – Skiing and riding on nine slopes with five lifts operating. They are featuring a packed manmade powder surface on a 42-78” base.

Cataloochee – 100% open as they are skiing on 18 slopes with five lifts operating. They have a 46-74” base with groomed conditions. Tube World is also back in operation.

Sapphire Valley – The resort will open today with both slopes operating. They have a 28-62” base.

Sugar Mountain – It is a better start to the day at Sugar after they had a delayed opening on Thursday due to a power outage. They are playing on a 40-80” base with a manmade powder and frozen granular surface with 12 slopes and five lifts operating.

Wolf Ridge – The Wolf is skiing on four slopes serviced by three lifts. They are offering a 16-30” base with a groomed surface.

West Virginia
Canaan Valley – Canaan made a big jump in open trails today as they dropped the rope on 12 more trails bringing their total to 24. They have a 15-30” base with a packed powder surface.

Snowshoe – The Cheat Mountain magic was in full effect this week which allowed them to increase their available offerings to 47. They have 12 lifts in operation with a 45” groomed packed powder surface.

Check out this perfectly-timed shot from Snowshoe yesterday on Upper Ballhooter.

Winterplace – They are inching closer to 100% open as they are skiing on 19 trails with five lifts operating. Winterplace is playing on a groomed, packed powder surface with a 28-44” base.

Virginia
Bryce Resort – 100% open as they are playing on all eight trails. They have a 48” base with a frozen granular and groomed surface.

Massanutten – The ‘Nut is offering nine trails for play today with a groomed surface. They have a 34” base.

Omni Homestead – Homestead continues to look incredible as they are playing on a 24-38” base with a groomed surface. They have two slopes and two lifts open.

Wintergreen – A new terrain alert for Wintergreen as will be dropping the rope on a couple of new trails. They are offering 14 groomed slopes with four lifts operating with a 30” base.

As a note, Highlands will have a delayed opening this morning.

Tennessee
Ober Gatlinburg – The crew at Ober maybe the big winners this week as they have had an incredible week of snowmaking temps – along with some light natural snow – to restart their season. They are currently offering six slopes with two lifts operating. They have a 25-45” base with a groomed surface.

Maryland
Wisp Resort – A groomed surface this morning on 19 slopes that are serviced by seven lifts. They have a 24” base as they head into a weekend that should be incredible in McHenry.

Once we get the rain out of the way today, this weekend looks to be really nice across the region. Stay tuned for the latest updates on the weather, slopes conditions and more.